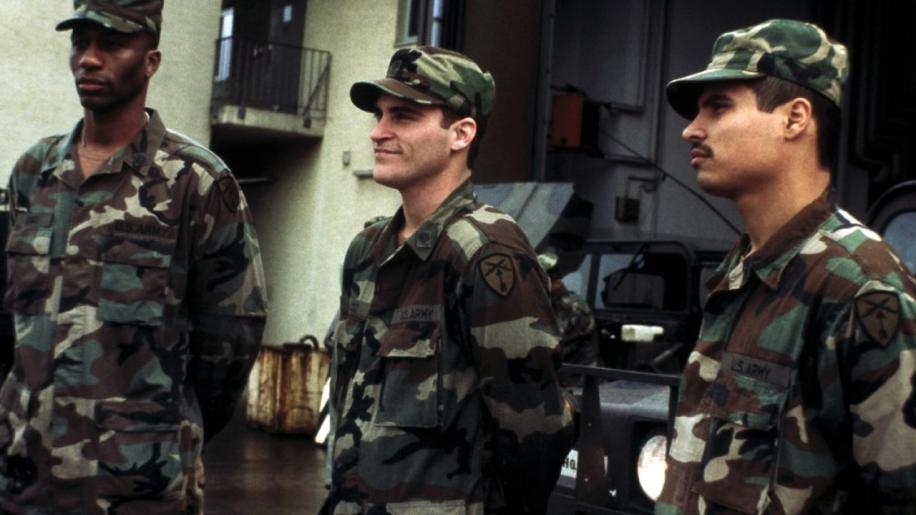 The video transfer on this anamorphic widescreen 2.35:1 presentation is a mixed bag. The opening credits exhibit some noticeable haloing which I found rather off-putting, and during the first few minutes a number of scratches become quite obvious. Grain, too, features in the movie's opening - when we first see the American base and the camera makes a slow pan, the German skies are riddled with graininess, and accompanied by edge enhancement on some of the building's signs.

Thankfully, these flaws are short lived and after a few minutes the print seems to settle down. Scratches do make an appearance throughout the running time however, and though these aren't particularly prevalent, they're still surprising for such a new release. What does become quickly apparent, however, is the cinematic quality of this transfer. Whilst edge enhancement is still there - outlines look a little too defined - overall the image can be best described as possessing depth. Colour saturation is good, with black levels strong and retaining detail; something of a relief considering much of the movie seems to be shrouded in shadow. Compression artefacts are also marked by their absence, and detail is adequate.

The transfer never really shines, and the opening gremlins are annoying, but overall this is a reasonable effort.

Presented in 448kbps, the Dolby Digital track shows it's more than capable of delivering the necessary sonics. This isn't an all-out-all-channels-blaring experience, more of a subtle one but with a few moments that display teeth. Mainly dialogue driven, the centre channel remains clear and poised throughout the running time, with voices clean and crisp. Steering is adequate with reasonable use of the front soundstage, although the rears rarely kick into life. When they do, it's generally accompanied by a burst of LFE, and the bass - when required - will rip through your listening room with ease. Tight and forceful, there are a few pleasing moments where the bass extension plummets very low, which gives the movie a welcome dynamic snap that would otherwise be missing.

This isn't a reference soundtrack, nor is it designed to be; perfectly in keeping with the movie, you'll be enjoying the movie so much you probably won't even care if it was in stereo.

At first glance, the extras look thin on the ground. First up is a “Behind the scenes” featurette which runs for 5 minutes. I was expecting your typical promotional bunkum, but I was pleasantly surprised and this wasn't quite as bad as I was expecting. It pales into significance, however - despite a few interesting pieces of information on the story and production - against the “Anatomy Of a Scene” documentary. These have become something of a treasure on DVD releases, and on Buffalo Soldiers this view is reinforced.

Taking on the best scene of the movie - the tank rampage in a German town - this is dissected as we learn of the difficulties the production team encountered, and the various techniques employed to shoot the lengthy sequence; featuring various members of the production crew including the director, this is fascinating and a worthwhile watch if you enjoyed the movie.

Also interesting is the Director's Commentary, which is above average compared to a lot of the dross we see on discs today.

Overall the features aren't extensive, but all of them are quality. Good stuff.

An excellent, refreshing movie with an adequate DVD release. Go and buy it...