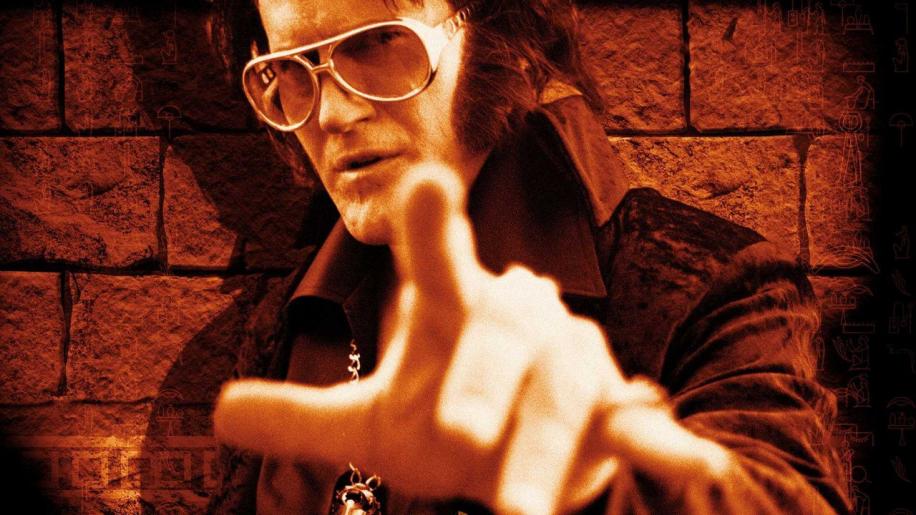 ‘Bubba Ho Tep’ was released in 2002 and was directed by Don Coscarelli, who also penned the script. From the man who brought us the wonderfully gory ‘Phantasm’ series of movies (not to mention the also impressive, ‘The Beastmaster’), his latest offering is equally as inventive and bizarre in concept. Fittingly, Coscarelli has signed up one of the best genre twisting horror actors in the business, Bruce “Don’t Call Me Ash” Campbell, to take on the lead role. Here, he plays none other than The King himself, Elvis Presley. Joining him is acting legend Ossie Davis (’12 Angry Men’), who has an absolute wealth of acting experience, spanning over forty years. Corscarelli doesn’t venture behind the camera too often but when he does, something special is usually created, and, with two highly diverse and charismatic actors at his disposal, the stage is set for a return to the glory days of schlock horror.

The bizarre plot can be summarised quite simply; Elvis and JFK fight an ancient Egyptian mummy, who is terrorising their retirement home. To explain; Elvis, sick and tired of being a superstar, switched places with an impersonator (Sebastian Haff) in the early seventies and went on to enjoy a life which was his own and did not belong to the fans or the music business. It was Haff who actually died in 1977 (when the world collectively mourned the passing of a legend); while The King went on to spend his twilight years in a retirement home. It just so happens that the 35th president of the United States, John F. Kennedy, also resides in this particular retirement home. I’m purposely not going to give too much away about the character of JFK, as I would do his back story an injustice; you really have to watch the movie to get the full impact of what actually happened on that fateful day in November, 1963.

But things are not all love and roses in the Texas Mud-Creek Shady rest home; where people go to die. An Egyptian mummy (who has a distinct cowboy theme) is on the rampage, cleverly preying on geriatric grannies, who are an easy kill. With the Tutan threat looming, and indeed their own lives at risk, it’s up to our two iconic heroes to rid their peaceful abode of this ancient horror.

Although the (sparse) plot synopsis marks this movie as categorically left field, it’s a movie that instantly won a place in my collection when I stumbled across it some years ago. Like so many “cult classics”, this movie had a very, very restricted release and by the time it emerged on DVD, it was already immensely popular. Sales soared and catapulted this movie further into cult superstardom, with word of mouth and lack of availability spreading the excitement about Campbell’s latest offering. I was always a big Bruce fan, having loved his previous work (‘Army of Darkness’ being my personal fav), and here he puts on the performance of a lifetime. As the plot unfolds, the tired and decrepit Sebastian Haff impersonator preaches, to anyone who will listen, that he is in actual fact The King of Rock and Roll. Of course initially the audience believes that he is a senile fool but when we’re treated to a flashback explaining how Elvis made the switch with Haff, suddenly the entire concept becomes plausible. Campbell then goes to work, instilling his character with the mannerisms and flair of the man he once was. Facial expressions, his walk (complete with Zimmer frame) and the manner in which he engages with the mummy and his co-residents at the retirement home, all indicate that he was once someone great. He, in the early stages of the movie, tinges Elvis’s current life with regret and reflection, wondering where it all went wrong; wondering that if he had the chance to get the fame back would he take it (and indeed, would he have Priscilla back as well?). This mindset drains The King of everything that made him who he was. But when Bubba Ho Tep appears, Elvis, who was previously finding it difficult to make it to the bathroom in time, begins to feel reenergised with the sudden onset of danger. He has a purpose. All of this is portrayed with complete ease by Campbell, who puts on the strongest performance of his career here.

But there’s another player in the cast, who looks to topple Bruce from his acting throne; Ossie Davis. As soon as he appears on screen, there’s an immediate weight and seriousness about him that’s quite spectacular. Again, in an effort not to give away any spoilers, I’ll just say that the combination of Campbell/Davis and Elvis/JFK is worth the price of admission alone. These two most certainly take up the lion’s share of on screen time but there’s good support from the rest of the cast, most notably Ella Joyce, who plays Elvis’s nurse. Coscarelli does a fine job of keeping the sparse plot moving along with a satisfying pace, making a clever decision to move the focus of the piece away from mindless gore to concentrate on the character of Elvis. He takes a considerable amount of time to expand Campbell’s character and to really allow him to grow, backing his story with facts and little nods towards the legend of The King. The same can be said for JFK, who is also given time to develop traits and other nuances, to help keep the plot ticking along. If Coscarelli had simply leaped headfirst into gore and terrifying(ish) encounters with the mummy, the entire impact of the movie would have been lost. Instead, he creates doubt in the audience’s collective mind, through characterisation and a carefully thought out back-story, in conjunction with a very witty script. As you watch, you begin to wonder if this was not a more accurate version of what really happened to the King; that he lived on in a blaze of glory and didn’t actually fade away, full of drugs and eating copious amounts of cheeseburgers. Coscarelli plays to the diehard fans and common lore, using every advantage to make the combination of a legend in a horror scenario work; a lucid and reflective Elvis, one who realises the shortfalls of his choices, as documented by his legions of fans, rises like a phoenix and returns to greatness.


‘Bubba Ho Tep’ is by no means a perfect movie. With serious budgetary restraints (30 days on a shoestring), the special effects are at times a little lacklustre and distinctly cheap. The plot is also a little silly at times and the ending never really did anything for me. The horror aspect is nothing in comparison to the likes of ‘Ju-On’ or ‘Rec’ but it’s not completely lame either (there are one or two moments that will make you jump, but aside from that it’s pretty tame). At times this feels like a seventies throwback (which adds to the charm) but yet it’s a movie that I often return to, and enjoy every time. I believe that this is largely due to the master class central performances from the two main players, and the delightful internal monologue from Elvis that drives the entire movie along. It’s difficult to imagine anyone else pull off these performances with such competency. Coscarelli knows how to make movies and here he gets the best from both his cast and plot. The piece is also completely novel and with all of the remakes and adaptations floating around at the moment (and indeed for the last number of years), it’s refreshing to enjoy something different. There are also elements of humour thrown in for good measure (with some genuinely funny laugh out loud moments) and a heavy dose of black humour. Like I said, this is not the perfect movie but for those looking for an imaginative and interesting twist on the horror genre (or if you are a Bruce Campbell fan in general), then look no further.