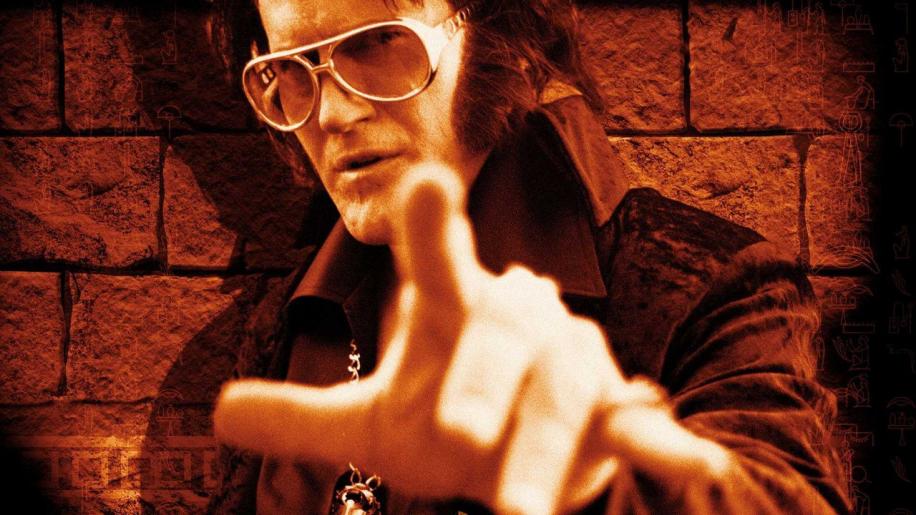 It's good to see that time has been taken to encode this wonderful movie with a great print. Warm and woody browns are the order of the day. Take a look at the DVD cover to give you an idea of the tonality. Details both in bright light and in the deep dark shadows of the Shady Rest nursing home are pin sharp. The aged and heavily wrinkled faces of the leads are crystal clear. There is also a total lack of digital artefacts. A first rate presentation. Sound is also outstanding. Vocals are deep, rich and warm. Elvis' voice in particular is honey rich. Off screen and foley effects are frighteningly effective, and subtly placed. But the best is yet to come. The score by Brian Tyler is brilliant. The thematic guitar chords are a soulful, laconic lament, which can comfortably rise to a heroic call to arms, or drop into a tear jerking rock ballad. This score rocks through a well balanced 5.1 set-up. I have already placed my order for the soundtrack CD. This wonderful disc is rounded out with a host of entertaining and informative extras. First up are two audio commentaries. The first is a rewarding chat track between lead Bruce Campbell and director Don Coscarelli. Both men talk enthusiastically about their involvement in the project, and question each other at various points during the on screen action. Track two entitled “Commentary by The King”, is an often hilarious voice over running commentary of the film by Bruce Campbell as “Elvis”. He happily critiques the movie while chomping on a bag of popcorn.

Also on offer is an informative series of three Making Of... featurettes covering special effects, costume and the development of Brian Tyler's rock score. A feature I have never encountered before is a reading of the first chapter of the novel “Bubba Ho-Tep” by writer Joe Lansdale. This is performed excellently, with photo stills from the movie to enable the viewer to compare the written word to the version shot, an inventive and valid inclusion. Rounding the disc out are a couple of shot deleted scenes, trailers, TV spots and photo gallery, and a short music video of the Bubba theme. Just in case you haven't got it yet Bubba vs. Elvis is a Royal Rumble you should not wait to see. One thing to note though - despite what the marketing and advertising may say this is not a horror flick and is more Ha Ha than Aaaargh, so don't buy it expecting B movie blood and guts, but do buy it. It has replaced Tremors as my all time, number one, low budget comedy/horror movie.