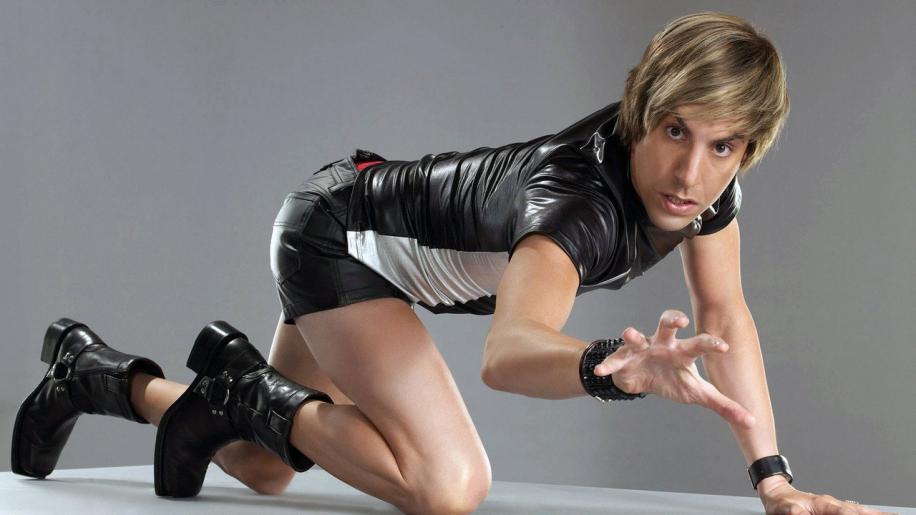 I am not usually the first to volunteer when the option of reviewing a comedy disc comes up. After all, more so than any other genre comedy is subjective. However, I am a big Sacha Baron Cohen fan. I enjoyed the underrated Ali G : Indahouse immensely, and of course the merits of the film version of Borat need no comment. Therefore, the option to review Bruno was too great to miss, having somehow not managed to catch it at the cinema.

The film introduces the final character from Cohen's TV series, the “Austrian Fashionista” Bruno. Bruno is a gay character who in the TV series was known for getting masculine men to explore their gay side without even realising his agenda. The film, however, takes a different approach. In the film, Bruno is blacklisted from the fashion business after disrupting a Milan fashion show and decides to go to America in order to become a celebrity. The first three-quarters of the film sees him attempting (and failing) to gain this status, before attempting to go straight as he feels this is the only way to achieve his goal. Along the way, several set-pieces are strung together with varying degrees of offensiveness. Paula Abdul is interviewed, a TV show is presented to a focus group, Bruno attempts to make a celebrity sex tape, and the climax is a quite astonishing wrestling bout in a cage in front of American rednecks.

The problem with this film, however, is that it is far too similar to Borat in its approach. And when I say similar it is almost identical in places. Remember the humiliating scene between Borat and his assistant in a hotel? Well, there is a scene here where Bruno gets into a humiliating situation with his assistant in a hotel. This is but one example of several key scenes which are absolutely identical to their predecessors. This is really quite an astonishing level of laziness from such a talented performer. Whereas the scenes mentioned may have their merits in terms of humour, the end result is your funny bone is far less tickled by the fact that you have seen them before.

It is not just key scenes that are lifted from Borat but the whole concept behind the movie. What Bruno chases may be a vaporous goal compared with what Borat is searching for, but both films attempt to hold a mirror up to American society in order to satirize the land of the free. They do this by planting a character into everyday situations and observing the people's reactions to him. In Bruno the main target is homophobes, and some of these people and their prejudices are shown up. However, the problem with this film is that some of the antics that Bruno gets up to would be offensive whatever the nature of the sexual acts he is performing. For example, in once scene he goes to visit a psychic in order to make contact with Milli from the eighties band Milli Vanilli. Once Milli comes through, Bruno asks if he can kiss Milli. The psychic says yes, only to see Bruno get down on his knee and perform a sexual act on the imaginary singer in quite astounding detail. The fact that they focus on a visibly upset psychic means that they were clearly hoping for a reaction to what Bruno is doing. However, the sheer fact of the matter is that the act itself is irrelevant because it is clearly inappropriate under the circumstances - thus some of the edge is lost.

This is not an isolated example either. At one stage Bruno presents a pilot for a new TV show to a focus group in which a key scene is of a close up of his penis gyrating. The focus group are obviously shocked - but this says nothing about their attitudes towards homosexuality. I would warrant that anyone who is signing up to review a new chat show would be rather shocked if presented with such an image.

So whereas the goal of Borat was obvious and well thought out, the same cannot be said of Bruno. Whereas the aim of the film is clear, I am not entirely sure that the makers achieve their objective. Offending the audience is absolutely fine if it makes a point - and this was the case with Cohen's previous film. In this movie, unfortunately, the set pieces come across as merely aims to shock with no deeper thought behind them.

Bruno fails in its main objective to satirise America's latent homophobia, but perhaps more importantly than this, is it actually funny? Well, on this I am afraid the jury is out as well. There are some amusing pieces, such as when Bruno appears on a chat show in the American South with his adopted black baby, but these are stretched out too far. Other scenes which expose exactly how far a woman will go in order to secure a part for her baby in an advert are so shocking they actually go beyond funny and leave the audience cringing. This happens throughout the film, time and again, not so much laughing at the screen, but genuinely cringing at what is presented. Sometimes this is at the antics of Bruno himself, sometimes it is at the people he meets, but at no stage does the laughter run freely without the undertone of discomfort.

All this should not distract from the skills of Baron Cohen himself. The man is a true original and the lengths he goes to in order to achieve his goals are quite phonemenal. If you have any doubt about the reality of the situations presented in this film, you only need to watch the picture in picture track to realise just what danger Cohen exposed himself to. His performance is such that you forget that he is acting, playing a role. The amount of skill involved in what he is doing, completely inhabiting a character in circumstances where he never knows what is going to happen next is immense.

Having watched this movie, however, unlike Borat I am not sure I would ever want to watch it again. I finished it admiring Baron Cohen for his abilities, but finding that it just didn't manage to make me laugh that often. Being made to feel uncomfortable when watching a movie is not necessarily a bad thing, but I am not entirely sure that this was the aim of the film-makers here.