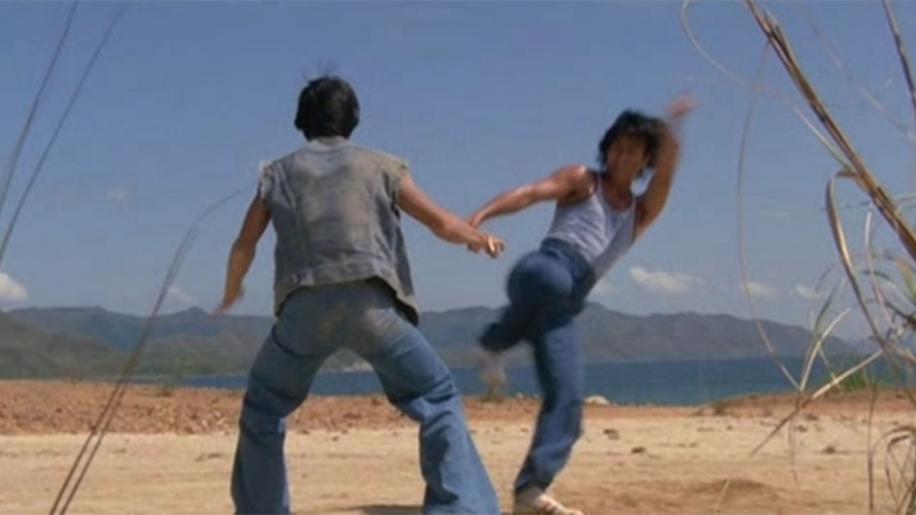 Bruce Lee is quite frankly a legend, I, however, don't know a huge amount about the man. I know he was a patriot and an expert in his chosen field. I know he was a master of the “1 inch punch”. I know he became the biggest and most famous Asian film star of all time, even to this day. I also know the events surrounding his death were somewhat mysterious. What I did not know was that Lee was a pot smoking, pill popping drinker infatuated with Betty Ting who actually died of a brain disease. Amazing what can be learnt from seventies kung fu films.

Betty Ting, a little known actress, became world famous for a while after Bruce Lee was found dead in her room in 1972. Come 1975, the Shaw Brothers financed Bruce Lee and I, a film staring Betty along with Danny Lee (one of a thousand Bruce Lee clones that appeared after his death) and was supposed to be a fact based story about Betty's and Bruce's relationship.

The film starts very elegantly with a sweeping ballad (hilariously called I won't change my hair.... or something) set to a glorious sunset as Betty remembers the events of the film. We open with Bruce driving like a madman in his Mercedes to visit Betty. Once there he showers (!) then jumps into bed with her after drinking, pot smoking and pill popping for the first of many naked romps complete with outrageous seventies style porno music. Then he dies. Subsequently, Betty is hounded by paparazzi and gossiping women and even gangs of savage nun-chuck wielding youths hell bent on getting the woman that killed Bruce. So reluctantly she tells her (sob) story to a barman.

Betty's life is one of bitter disappointment, fighting in school lead to her expulsion, so she wondered the streets seeking escapism at the movies. One fateful day a sleazy movie producer offers her a part; he promptly drugs her and takes naked pictures to use for blackmail. Fleeing from this fate she is nevertheless accosted in the street by the same producer, only to be rescued by a mysterious kung fu expert; he cannot help her other than with financial means. A few years and a hair cut later Betty has become a high class call girl, when she crosses paths with an up and coming film star Bruce Lee. She instantly recognises him as her rescuer from years back and repays him the money he gave her. The two then form an instant bond that eventually turns to sex. Bruce is not yet the worldwide star he would become, pressures of his job and the fact he is unable to get Betty an actress job puts strain on their relationship somewhat. Betty sinks into gambling and debt until she gambles away her house. Bruce, meanwhile, at a loss without Betty vents his frustration in many, many street fights. Betty, with nowhere to turn, finds herself at the mercy of a loan shark's thugs, at Bruce's house no less, Bruce saves her once again; only to take her to a beach and forcible impress upon her the error of her ways. He relents, however, and now he is such a big star manages to get her that leading role; so just when it looks like things will go well for the pair, he ups and dies. The Barman is so impressed with Betty's story he fights the nun-chuck thugs for her and wins stating that Betty did not kill Bruce; he died with a brain disease.

I am in two minds about this film. On the one hand we have a terrific and camp seventies kung fu flick, on the other there is an utter rubbish film. For example if you remove all references to Bruce Lee the film is pretty much like all seventies Shaw Bros. productions; high octane fighting sprinkled with liberal amounts of sex held together with an implausible script. And on that level I can look through all the terrible acting (Bruce did more than just flick his nose!), direction and rubbish dialogue. If, though, you try to present that same film as historical fact then I begin to have a problem, especially if the real life counterpart was portrayed totally fictitiously. When viewed in this light the film has a much sinister side, the kind of base horror that is employed by the tabloids and paparazzi of today's news; any dirt to sell a story, doesn't matter if it's true. Betty Ting herself has never publicly denied any of the claims made in the film, but it has been proven that many of her alleged meetings with Bruce were untrue as he was out the country filming Enter the Dragon. The whole thing smacks of sensationalism, even thirty years later, and no amount of campy seventies dating is ever going to change that fact, and it has dated, terribly. The only glimmer of hope is that Betty is shown in the worst light too, yet it is this film above all others that she will be remembered for; excising her demons or furthering her career? The fact that it pretty much ruined her so she retired six years afterwards still does not answer the question; falling into obscurity while Bruce remains an icon. Some reputations are too good to tarnish. Thankfully Bruce has one of them.

Bruce Lee and I? Rubbish more like, finally made up my mind.