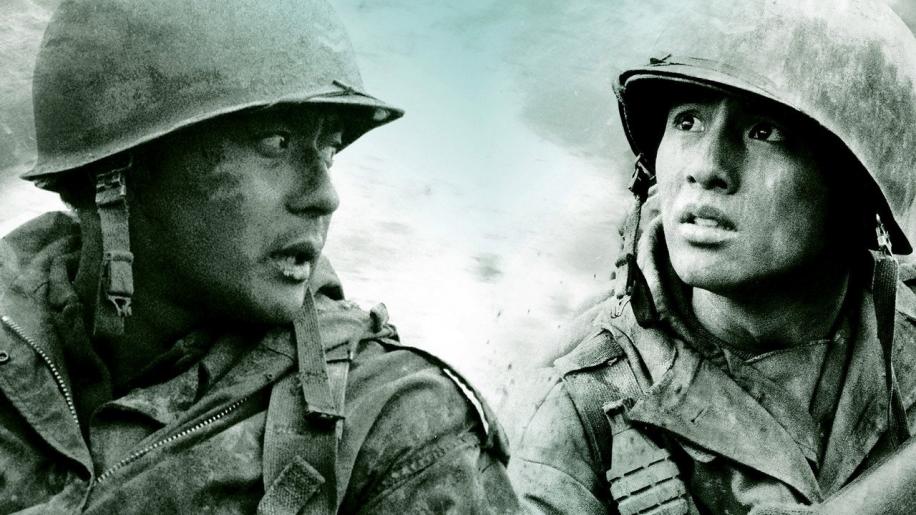 Korean cinema has produced some fantastic delights recently, from unusual horrors like Shutter to masterful thrillers like A Bittersweet Life, which should be ranked up there alongside masterpieces like the Ring trilogy and the Infernal Affair trilogy. Then there's Oldboy, which should have a genre all to itself, an instant classic in much the same way as the recent Sin City. Korea has truly come a long way in the last half a dozen years and now we get a seminal portrayal of the Korean war, gaining much acclaim and a worthy comparison to Spielberg's Saving Private Ryan to boot.

When things reach boiling point, the communist North Korea kicks off an incursion into the South which results in all-out war. Desperate to make up comparable numbers, Southern recruits are drafted indiscriminately - as long as they are over 18 and able to see, hear and walk, they are bundled off to fight. Amongst those poor young souls caught up in the draft are two brothers - Jin-Tae and Jin-Seok. Jin-Tae, the older of the two, previously worked a shoe-shining stall just to pay for his younger brother, Jin-Seok to go to college and have a decent life. After the younger man is dispatched to war, Jin-Tae leaves behind his loving girlfriend and mother to protect his brother, making sure that every step of the way they are fighting side by side. Realising that the only way to return his younger brother safely home is by winning the much coveted Medal of Honour and gaining enough stature to make the request, Jin-Tae throws himself into the fight with every ounce of his strength. He single-handedly turns around battles, captures enemy Commanders and secures enemy gun emplacements as if he were invulnerable, but before long the horrors of war get to him and Jin-Seok begins to doubt his older brother's true motives for success at all costs.

Brotherhood paints a gritty, brutal but very human portrayal of a horrific time of conflict, following two true heroes as they struggle to survive. In my opinion, it is well worthy of comparison with Saving Private Ryan, boasting a more streamlined vision with equally devastating scenes of war and a more engaging political stance. Sure, the concept of ensuring that one brother returns home to his family is drawn parallel between the two films, but the way in which they evolve the characters in this war movie is far superior. Jin-Tae starts off with one clear mission - to save his younger brother - but an hour into the movie you are wondering how far he will go and whether or not he is indeed doing it all for Jin-Seok, or whether all the glory is actually getting to him.

The story is made utterly compelling and resoundingly convincing largely thanks to a superb lead performance by Jang Dong-Gun as the gallant but conflicted Jin-Tae. Managing to convey every ounce of passion that this desperate soul contains, he does a stellar job and will hopefully be granted suitably starry roles following on from this. Although largely told from his perspective, it is sometimes difficult to bond with the confused younger sibling Jin-Seok, despite an admirable effort by Won Bin. Clearly affected in a different way by the horrors of the war, he simply cannot condone the actions of his older brother, irrespective of the reasons behind them, occasionally making him a difficult character to side with even with his more humane principles. We also get superb support by the late Lee Eun-Joo as Yung-Shin, Jin-Tae's faithful girlfriend, who tries desperately to hold the family's life together whilst the brothers are off fighting. It is worth noting that Oldboy himself - Choi Min-Sik - pops up fleetingly as an expectedly almost unstoppable battle-hardened North Korean Commander.

The writer/director of the excellent Shiri (which is probably the first major modern Korean film to enter my collection) has created a epic war film for a tenth of the budget of comparable Hollywood creations but of equal stature. With a multitude of brutal, artillery-devastated action sequences fully capturing the feel of such a massive confrontation, alongside a well-chosen cast of solid actors performing to a solid, moving script, the end result marks yet another key point in Korean Cinema history and yet another key film in anybody's collection.