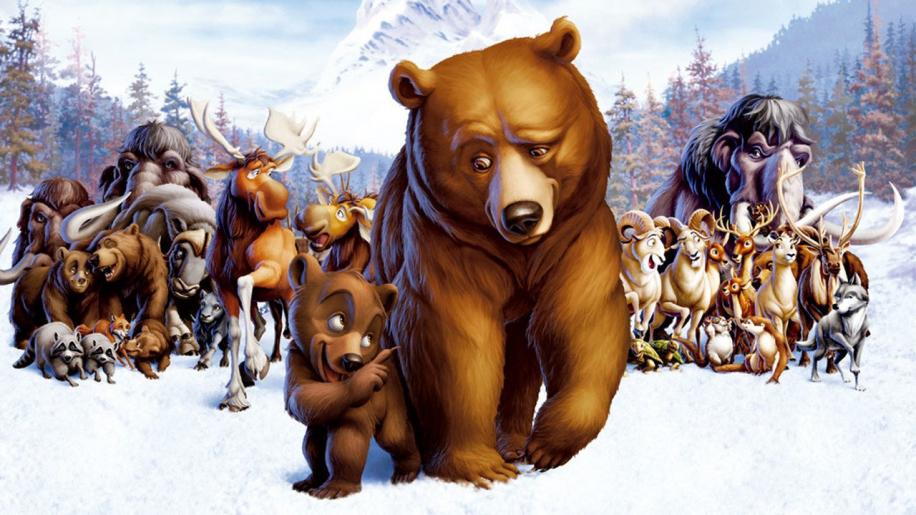 There are two different versions of the movie spread over the two discs in the set. The first disc contains what Disney describes as a “family friendly aspect ratio”, that means full frame 4:3 to you and me. Watching the movie in this ratio (yes I did watch the movie again in full frame, you will see why in the extras area), the film feels a little claustrophobic and the stunning scenery suffers from the reframed image, there is an important moment around the 24 minute mark where the image is supposed to widen (I'll explain more in a minute), but in 4:3 the effect is lost and the framing becomes tighter and even more uncomfortable.

Moving onto disc 2 we have the 1.85:1 and 2.35:1 version of the movie, yes that's right two ratios for one film, let me explain. The film begins in 1.85:1, imagine a 2.35:1 image with it's black bars top and bottom and then blank the sides so you have 1.85:1 ratio. Yeah that's right the 1.85:1 image is surrounded by black bars, then at approximately 24 minutes into the movie they image widens out to a full 2.35:1 scope ratio. Why I hear you scream, well it has to do with the story of the film and the main character, when he is transformed into a bear his vision changes, hence the wider ratio and more colourful image, it symbolises the characters change and that he is looking at the world and his life differently. In my opinion it was a brave move to try something new like this, and once you get started you forget the black bars all around and the transformation scene makes more sense. I think it works, but I can see many disagreeing with me.

So how does the image look then now that we have the aspect ratios out of the way. The print is flawless in terms of dirt and scratches and the image for the most part is nice and sharp with lines looking detailed. Colours are rich and detailed with no signs of bleed. However I did notice what looked like colour banding in the brown areas of the image, such as the bodies of the Moose. This looks like a problem in the actual colouring of the animation rather than a problem with the transfer. All in all this transfer looks very clean, crisp and clear. So we move onto the soundtracks which are presented in both Dolby Digital and DTS 5.1 formats. It is encouraging to find DTS reappearing on R1 US discs after a long absence, it appears Benny Vista is now taking into account the success their R2 counterparts have had in the UK. First up are the menu screens and a big surprise is the fact they are in 5.1 and use this to great effect. We have the Moose talking away in a 360 degree arch around you as you wait to choose an option.

Getting into the film is also fun with the surrounds being used well carrying the score and sound effects in a realistic manner. The transformation scenes stand out for me with good deep bass and voices of the Bulgarian choir surrounding the sound stage. LFE effect are strong and deep helping to set the tone and pull you into the movie with thunder storms and the heavy feet of woolly mammoths. Dialogue is intelligible and dynamic and the musical numbers have a live feel to them. Listening at reference levels the DTS track just edges things with a wider sound stage and better controlled midrange and LFE channel, but there is not a lot in it to be honest. Overall a very good sound mix which adds to the movie and pulls you into the action as it should. As with most Disney titles you have to expect most of the extras to be based at the younger viewer and that is true to a certain extent here. However I found a real gem for the adults and I haven't laughed as much in a long time at such an entertaining commentary track than the one found here. The two Moose Brothers Rutt and Tuke (played by Rick Moranis and Dave Thomas) produce an audio commentary which will have the adults laughing out loud but the jokes will go straight over the kids' heads. The commentary is anything but serious; both actors have a tremendous sense of humour and the jokes come thick and fast, indeed this extra alone is worth the purchase price! However you have to watch the commentary on the full frame edition on disc 1. Moving on we have a number of music videos, a feature on Phil Collins and the score, a 45minute making of which covers most angles and trailers. All in all a very comprehensive package and the best commentary I have heard in a long time. Brother Bear is far from a Disney masterpiece, but is enjoyable for what it is. The DVD has good picture and sound and some entertaining extras, well worth a look.