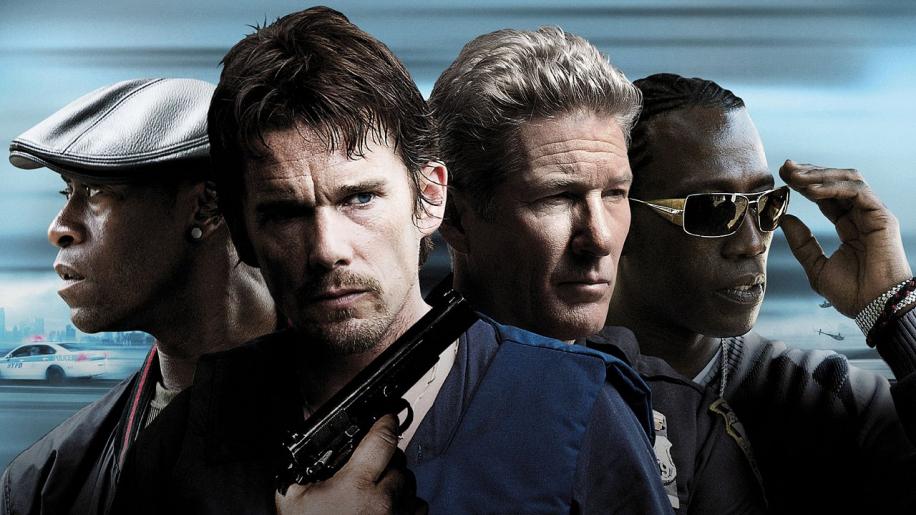 Antoine Fuqua has had quite an interesting 12 years working as a Director. He is most famous perhaps for his aggressive police drama Training Day, which secured Denzel Washington a much deserved (although, arguably, not his best performance) Oscar. Fuqua has also done the underrated military thriller Tears of the Sun, a great little movie that should have received more attention than it got, but his film history is also peppered with distinctly flawed blockbusters: from the misguided and lacklustre Clive Owen-starring King Arthur to the disappointingly shallow (but still frivolously fun) Shooter, with Mark Wahlberg doing his best dumbed-down Bourne impression. There are rumours that Fuqua has often had problems getting his cut of the movie signed off on, the end result often being noticeably hampered by Studio pressure, so it is not always easy to know what to expect from his efforts. Despite the promise that they may hold on paper, will the potential that is there actually be fully realised? Brooklyn's Finest, his latest movie, features an all-star cast of reliably good actors in a solid story about 3 cops and a drug dealer, whose lives intersect, Crash-style, with dramatic results. But is it actually any good?
The movie tells the tale of three disparate cops who all work within the 65th Precinct in Brooklyn, New York. Eddie's been on the job for 22 years. Minding his own business, never thinking above his level and clearly cynical from his experiences as a beat cop, he has never risen above patrolman and just needs to make it through the next week before he can finally hang up his gun and badge for good. Sal is a narc, who spends his days putting his life on the line breaking down doors to raid heavily armed drug dealers. With an ever-burgeoning young family and a health and safety problem in his house, he is desperate to raise the cash to move to a bigger property. And he will do anything to get it. The third cop has been working undercover under the street name of Tango for years now, making close connections in prison and moving his way up the food chain within the gangs on the streets. Best friends with recently released drug dealer Cas, he finds his loyalty tested when he has to decide whether a promotion to a desk job (finally ridding him of his undercover persona) is worth the price of betraying his friend. The story follows the lives of these three cops over the course of a week, as they hurtle towards their own dark destinies.
Brooklyn's Finest is a decent police drama that paints a picture of some very interesting and richly-painted individuals. It cleverly interweaves the stories, building each strand independently, and then bringing them all together in a powerful climax. The film kick-starts with some very bleak introductions to the main characters, and goes on to develop each one, showing the pressures and complexities within the life of a cop: whether at street-level, undercover or busting gangs as part of a heavily armed unit. The Director, Antoine Fuqua, is no stranger to cop dramas, and his experience making the superior Training Day is clearly evident here, as he fashions a professional but still personal tale which comprehensively explores themes of morality within our society. It posits plenty of 'what would you do?' questions where there is clear right and wrong answer, the whole substance of the drama clearly residing within that deep grey area between black and white.
Performances are top notch, Richard Gere standing out amidst the three mostly because he just hasn't done anything good in years (well, nothing anybody's really noticed, although he put in a similarly dark and powerful performance in the bleak 2007 straight-to-DVD drama The Flock). The man is a superior actor, but as with many quality performers of his ilk (Warren Beatty springs to mind) he simply does not make enough movies. Excellent in the underrated drama Internal Affairs, he brings his trademark intensity to his role here, yet perfectly underplays the part, presenting his veteran beat cop, Eddie as a broken man who has little left to live for. Discarded from the force after devoting more than two decades of his life to 'protect and serve', his is the most unusual of the three lead roles. He isn't a hero - or an anti-hero - he's just a nobody who has seen so much that is wrong in his years with the police that now he is too damn tired to do anything right. I really hope Gere picks some good roles off the back of the standout performance.


Ethan Hawke, who previously worked with Fuqua on Training Day, plays a very different role here, as the narcotics unit cop forced into corruption through his familial situation. I have to say that I did not sympathise as much with his character - I mean, even as a devout Catholic, surely after your 6th child is born you might consider that some form of contraception would be a preferable sin to, well, considering murder as a solution to your wife being pregnant, again, with twins! Still, Hawke is pitch-perfect in his driven-to-the-edge performance. Rounding out the trio of pivotal actors we have the ever-reliable Don Cheadle. I've liked his work ever since his psychotic cameo in The Devil in a Blue Dress and he is great as ever here, only marginally hampered by a character which is just a little bit too clichéd.
An honourable mention should also be given to Blade: the tax evader, Wesley Snipes, who hasn't done work of this calibre since The King of New York and New Jack City. He is excellent as the recently released kingpin Cas, who secretly wants to just get out of the game. Rounding out the cast we have blink-and-you'll-miss-them cameos for the likes of Vincent D'Onofrio (a massively underused method actor famous most for his work on Law & Order: Criminal Intent), Will Patton (recently on 24), Ellen Barkin (the once feisty star of Sea of Love, opposite Al Pacino, who is now a leading example of the downside of excessive plastic surgery in middle-aged women), Robert Burke (Dust Devil, Generation Kill), Brian F. O'Byrne (the excellent assassin from The International) and Lili Taylor (Ransom). It's a veritable who's-who of solid character actors who all bring something to the drama.
The screenplay, from a first-time writer, is perfect material for Fuqua, who has needed a solid story ever since Training Day, but - as with that movie (which was arguably made great only because of Denzel Washington) - this is still distinctly familiar material. Although some of the characters are unusual (Gere's Eddie, as aforementioned, being the most noteworthy), the majority are terribly clichéd, having been done dozens of times before. And in often better movies: Donnie Brasco, Narc, The Departed (which was, in turn, a complete rip-off of the far superior Hong Kong thriller Infernal Affairs) and even the Director's own Training Day. That's just off the top of my head. Brooklyn's Finest may indeed be a collection of the finest stereotypes in the genre. It is basically a solid entry, polished, well performed but exceedingly familiar. And despite Fuqua's attempts to form his own multi-story style (the overlapping dialogue is well done and the Second Act climax where the three stories are interspliced is expertly handled) you are unlikely to get to the closing credits without thinking about a certain multi-character film called Crash.
Brooklyn's Finest may be good viewing, but it does not quite achieve greatness, treading already well-trodden ground with its every step: from the multi-angle story to the cops-on-the-edge characters to the violence in the hood topic to the predictable climax to even the damn score (which, as with many modern scores, has those familiar Bourne beats going on in the background). Still, despite the persistent feeling that you've seen it all before, and the fact that it is difficult to judge the movie independently of the standout entries in the genre, in its own right you have some quality viewing here. Tremendous performances, professional direction and a solid crime story prevail over the negative aspects and leave you with a decent police drama that deserves a place in the burgeoning genre. Worth watching for a quartet of powerful performances (including the surprisingly good Snipes in the group), the movie may be far from perfect (and the deleted scenes, examined more closely in the extras section, do hint at a potentially better cut with better dialogue overlaps) but it is still unquestionably worth your time. Brooklyn's Finest is a fine piece of work.