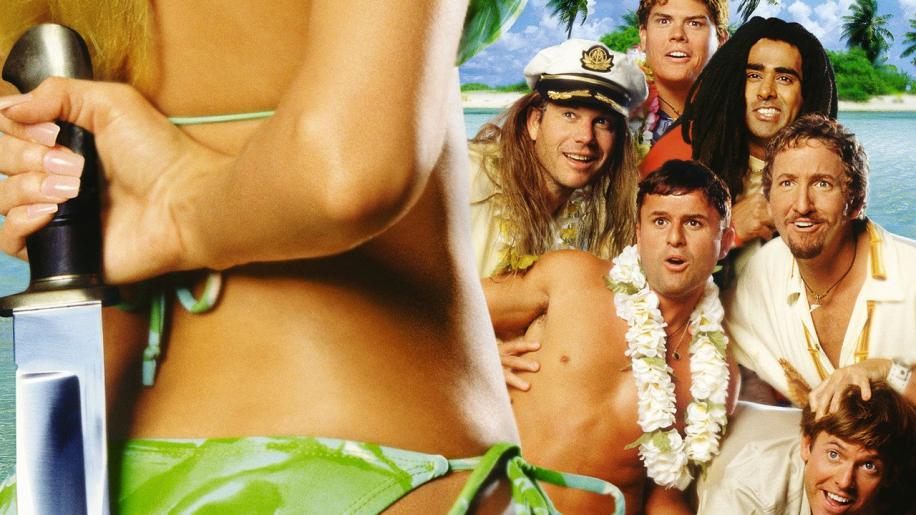 At first glance the image looks pretty good, skin tones are accurately rendered (with so much skin on show this is a definite point in its favour) and black levels are also handled fairly well with a decent amount of detail being apparent. Video noise is sometimes noticeable, but by far the biggest problem with this transfer is the amount of edge enhancement that has been used - it's practically ever-present, surrounding everything with a ghostly second image. Alarm bells started ringing (please excuse the pun) early into the movie - at the 13:11 mark, to be precise. This is a scene where we see two bikini-clad beauties being “rated” by a couple of lecherous dudes. I noticed a ghostly mirror image above one of the young ladies' out stretched arms and this disturbed me on two counts; 1. I became aware of just how bad the degree of edge enhancement actually was here and 2. I suddenly wondered if I had started taking my reviewing of DVDs too seriously... I mean, there was a time when haloing or whatever would have been the last thing I would have noticed in a scene with two “bikini babes” filling the screen!

For those with “normal” size T.V.s - up to 36” - even this amount of edge enhancement may go by unnoticed, but surely the most loyal Broken Lizard fans would find the movie practically unwatchable on a projector, or even a sizeable rear projection set. Which is a shame as I suspect that Club Dread will have its fair share of admirers.

Audio wise things are pretty mediocre - Club Dread has very little to make it stand out from the crowd. The 448Kbps Dolby Digital 5.1 track does its best to enhance some rather tame attempts to shock - a couple of times it works... so be ready for the “cat out of the closet” scene! In this respect the movie's sound effects department seems to have been very single minded in the way it has dealt with the style of the audio track and I lost count of how many times a “jumpy” scene would be accompanied by the seemingly obligatory screech of violins. Bass is also a little lightweight and overall audio is adequate, but no more. Personally, I think that a real barnstorming track, with deep rumbling bass combined with a more considered approach to the audio side of things would have vastly enhanced the whole movie experience. Having said that... I guess this would hold true for practically every movie - but I hope you get my point.

Club Dread has been released as one of those flipper-style single DVD affairs with a “modified to fit your screen” 1.33:1 image on side A and an anamorphic 2.35:1 widescreen image on side B. The two audio commentaries have been included on side B only - the first with director Jay Chandrasekhar, who also plays Putman, and Erik Stolhanske (Sam); the second has writer Paul Soter (Dave), Steve Lemme (Juan), Kevin Heffernan (Lars) - put them all together and you have Broken Lizard.

Jay Chandrasekhar turns out to be much more amenable - and funny - compared with the Putman tennis pro character that the director plays with such infuriating “Englishness” in the movie itself. Of the two commentaries, though, I would have to pick the second as the more worthwhile, and humorous, of the two.

The only other “extra” is a short trailer advertising Club Dread - The CD. Short and sweet, then!

A low budget Horror/Comedy flick gets a low budget DVD release. Despite the front cover's claim for the movie being “Flat-out side-splitting” - which I guess means very funny - and the rear cover's assurance that Club Dread is “Hilariously funny”, I, rather sadly, find myself in disagreement. Perhaps I've missed the point and failed to view this movie “in context”... then again, perhaps it's just not that funny!