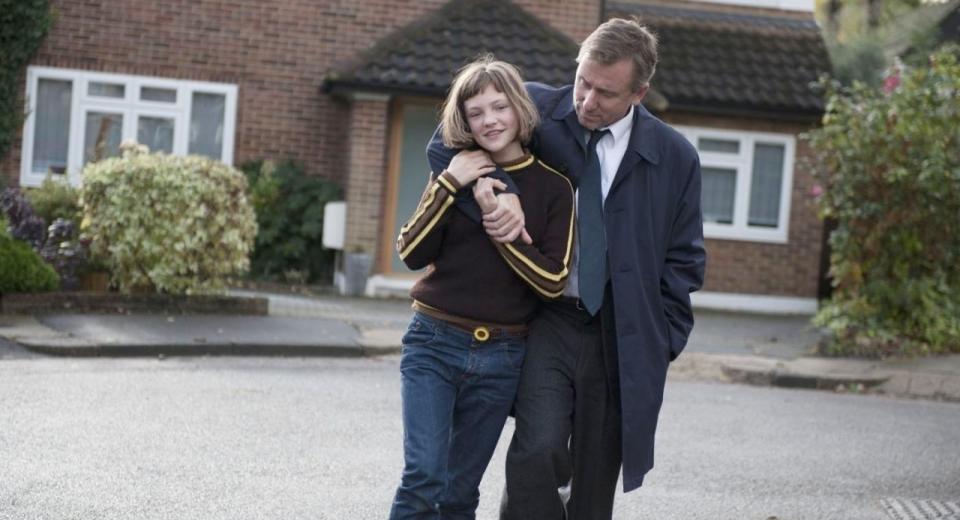 The disc presents a theatrically correct widescreen 1.85:1 1080p transfer using the AVC MPEG4 codec and is Region locked to B.

Unusually for modern-day film-making, and especially an independent film, Broken was made on 35mm film and the image has had little to no digital processing after the fact, this, whilst laudable, has led to a number of problems with the picture the most prevalent of which is the black level. As most know to get the best out of colours you need to have a strong black, it adds depth and punch to a picture – unfortunately this disc has neither, the brightness is set way too high and the contrast too low, this leads to almost no black in the image at all – it’s all a washed out grey – and this robs the picture of anything resembling attitude. With no blacks the picture is flat and washed out, colours are drab and lack solidity – reds can be quite strong, look to Skunk’s clothing, but it is the only primary with anything resembling vibrancy, greens and blues are equally weak. Skin tones, conversely, faired very well, whether by day or night having a typically English paleness to them.

Detail is ok, skin does have a reasonable texture, clothing can show weave and the grime on the caravan hideaway is suitably nasty with the various grotesques inside being well defined. But the black level also interferes here by softening the image in most places.
Digitally there were no compression problems, posterization was held in check and there was no edge enhancement. But there was plenty of crawling grain to many of the darker areas, where the greys hide any potential shadow detail, the grain covers it completely. Not the worst picture I’ve seen, but one that could have been easily much better with some attention to the black level. I concentrate on the English dts-HD Master Audio 5.1 track. We’re not in blockbuster territory here, so don’t expect a huge amount of surround effects and bombast because there are none. What we do have is a very competent track that relays its information well and manages to sound very natural while doing so. Dialogue is well mixed coming across the frontal array and is clear and precise. The surround speakers pick up on various points of ambiance, such as background noise of the wrecking yard close to Skunk’s hideaway, or typical school corridor/classroom noise, that helps to add to the picture. Bass is used to underpin the track and not used to push it forward, there are no LF effects, as such, it’s simply not that type of film. The score comes across well, especially when it is part of the film; the thumping party music makes the most use of both the sub and the surrounds for example. But on the whole it is a functional track and not one meant for demo material. Broken follows the long tradition of compelling independent drama from British cinema as extremely engaging, frightening, containing strong performances and with a dynamic narrative rooted firmly in the real world. The story tells of a young girl forced to come to terms with the world when she witnesses a violent act that ultimately leads to a tragic downward spiral for all concerned. Based on the award winning novel of the same name by Daniel Cray and brought to life by award winning theatre director Rufus Norris, the piece contains an outstanding performance from newcomer Eloise Laurence in the lead role and she is surrounded by wonderful talent giving their all to produce a film of the highest calibre. Brutal, poignant and very powerful there is a great deal in Broken to appreciate and emote to. Well recommended.

As a Blu-ray set this wonderful film is slightly let down by a rather poor picture in terms of its black level, though colours and detail are reasonable and the sound, while not fully engaging is very natural and fits the piece perfectly. A hefty amount of extras with regard to the cast and crew interviews make for some decent background information though a little more on the production might have been preferable. Despite this I think the film is strong enough to stand on its own.