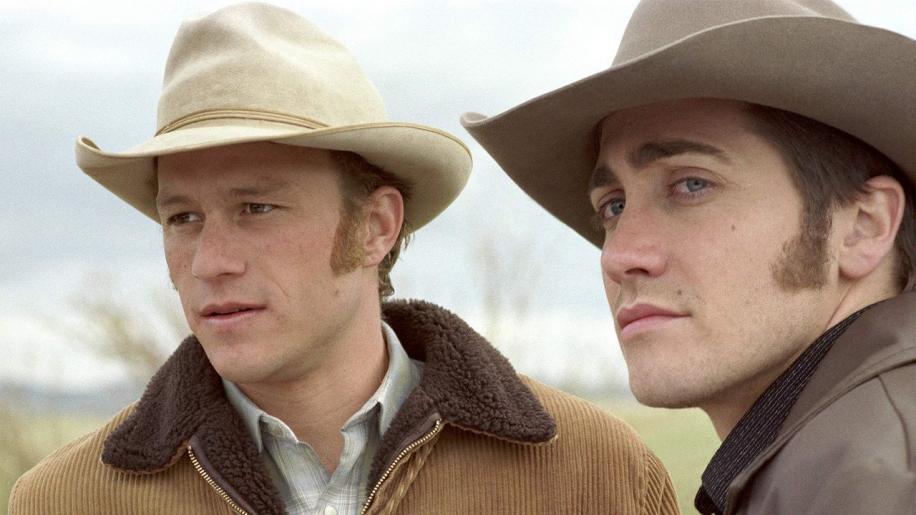 Brokeback Mountain is presented in a theatrically correct ratio of 1.85:1 and is anamorphically enhanced on this DVD. It's a shame that for such a recent movie, with such stunning photography, the transfer is marred with dust specs which is a shame as it can be quite distracting. Colours are bold and bright, from the backdrops of the mountains, to the neon glow in bars, they look completely natural. There's no sign of artefacts or edge enhancement, but there is a slight grain to the proceedings, although this isn't a particularly big budget production. Overall it's pleasing, but the dust on the print used seriously mars this title. Audio is presented in a Dolby Digital 5.1 and while the soundtrack is very much like the movie itself i.e. not very engrossing, it is clear as crystal. Indeed the guitar oriented soundtrack resonates nicely from the speakers, with a nice natural timbre and to my ears, is in the same league as the Hell Freezes Over disc. LFE hardly gets used, but it has one or two moments, such as when the storm starts, we have a nice rumble of thunder which gives the bass an opportunity to flex, but this isn't a movie that needs LFE, so one can't complain too much. Surrounds give a nice ambience, but again, most of the audio is dialogue and although this isn't a dialogue heavy movie ala Kevin Smith, it copes well enough. To summarise, it's adequate in general with some nice touches, but nothing that would qualify as a reference disc. First we have On Being A Cowboy, a 5:45 minute featurette, which focuses on the training that the actors undertook for their roles. Mostly Ledger is seen on horseback, so given his history of growing up riding horses, chopping logs and so forth, he seemed to be the natural choice. Hathaway also had to get to grips with riding a horse for her sequences and Gyllenhaal obviously not so much in comparison. The wranglers (trainers, not the jeans) are full of praise for the actors, but I'm not convinced of their sincerity, but that's probably just me.Next up, Directing From The Heart: Ang Lee, which is a 7:28 minute featurette, which starts off with Lee saying how he likes the taste of the name “Brokeback Mountain” (I kid you not), but soon it becomes mostly everyone saying how wonderful Ang Lee is, how much of a visionary he is in understanding the characters emotions and so forth. Highly gushy, but unlike the former featurette, there does seem to be a lot of respect for him. The one thing of note is the last couple of sentences Lee mutters, which seem to suggest that after his last movie (Hulk), he seemed to have lost his relationship with celluloid, but with this movie, he more or less states that he has effectively fallen back in love with the movie making process.

From Script To Screen: Interviews With Larry McMurtry & Diana Ossana runs for 10:54 and the title of the featurette really sums it up, except one small detail. It's not just the 2 named individuals talking - Ang Lee, Randy Quaid and others all pipe up and chime in. In fact during the course of the interviews, it actually inadvertently hits the nail on the head of the main problem with the movie - it's a short story, it really doesn't work as a full length movie. They openly admit they had to write 50% more than the original story, which to me, just summed it up - it wasn't so much dragged out, but taken round the back and pounded some more too. It has some insight into the process of how the story went to the big screen, but it was a little too long for my taste.Finally Sharing The Story: The Making Of Brokeback Mountain may be a making of, but as soon as it starts you know it has been taken lock stock from some TV show like “Entertainment Tonight” (It's apparently a Logo Movie Special - so my initial guess wasn't far wrong). Summed up with the phrase EPK says it all, this is not really going to tell you too much more than you've probably gleamed from the usual sources. It's glossy, sound bite central and very typical of the format - if you don't watch it, you haven't missed a thing. Bleugh - now I need to get rid of the saccharine taste it's left. For an Oscar nominated movie, I would have expected better. It's nice to look at scenery-wise, there's a semi-interesting tale in here somewhere, but when it take 2 ¼ hrs to tell what originally started life as a short story, that's warning number 1 right there. Sometimes, just sometimes, they can pull it off (Hellraiser possibly succeeds in that regard, off the top of my head), but here it's just strained and you find yourself all too many times either clock-watching or wishing something, heck, anything would happen. If you did like this movie, then you'll like this disc. I will say I was glad I watched it, so I can try and fathom out why it has been so critically acclaimed.