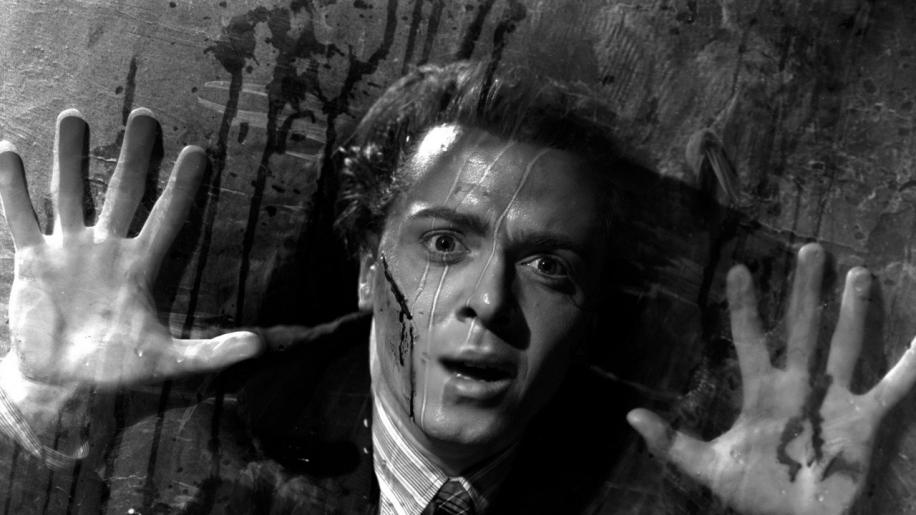 No folks, this isn’t a review of the recent remake of the British classic movie, it’s the real McCoy brought to you courtesy of our drive to cover the BFI Top 100 films available on Blu-ray. The 1947 version of ‘Brighton Rock’, now out on UK Region B locked Blu-ray, has had a digital restoration and comes to us as part of the Optimum Classic/Studio Canal collection. Whenever I’ve seen this movie on TV it has usually been in a Sunday afternoon slot on the Beeb with a washed out grey print rather than proper black-and-white. This has done little to show the camerawork of Harry Waxman in its best light, but now at least we have it in a format that does the movie some justice.

A product of the legendary Boulting Brothers, the film has a screenplay by none other than Graham Greene (whose book it's based upon) and Terrence Rattigan. British films shot in the post war period didn’t normally venture far from the controlled environment of the studio, but ‘Brighton Rock’ featured some real location photography of old Brighton town that forced the film crew to spend some time beside the seaside. The upside of this is that we get a chance to see the Palace Pier and Esplanade in all its splendour as well as the Lanes, now more famous for jewellery shops and boutiques.

The film features a great cast, but it’s Richard Attenborough’s performance as small time gangster Pinkie Brown that really stands out a mile. Long before our national treasure Lord Attenborough became a movie director, he was one of those great faces that made British Cinema what it was. Here, he delivers a study in menacing behaviour as well as someone with a mind that teeters on the verge of insanity. In case anyone has forgotten what a superb actor he was, here’s your opportunity to be reminded – big time! It’s all in the eyes. As part of Pinkie’s gang we see a young Bill Hartnell who went on to be TV’s first Doctor Who – indeed few will remember him for any other role. Nigel Stock pops up as the spiv Cubitt, another gang member. It’s like a ‘Who’s Who’ of British War movies slumming it in Civvy Street. Hermione Baddeley appears as the brassy actress (or maybe Pierot as they were called) Ida Arnold who doggedly pursues the deadly Pinkie.

I’m not going to dwell too much on the story here, as those who haven’t seen ‘Brighton Rock’ deserve the chance to savour its impact by seeing it for the first time without someone spoiling it for them. To sum it up quickly, the film opens as the Daily Messenger newspaper runs a promotion by sending their man, Kolley Kibber, to Brighton. Anyone who recognises him is encouraged to accost him, identify him and thereby win a money prize. Unfortunately, Kolley Kibber, has had some dealings with Pinkie and his gang in the past and they recognize his photo in the paper. Poor old Kolley gets a reception in sunny Brighton, the likes of which he’d rather avoid – so we see him pursued through the streets of the town to the Pier, ending up with him sitting next to a sinister Pinkie Brown on the ghost train and a quick demise. In his chase across Brighton, Kolley has met Ida Arnold who wants to get to the bottom of who killed the frightened man. In covering up their tracks, Pinkie’s gang have to recover postcards planted by Kolley around the town. They succeed in retrieving all but one card that was left in a cafe/restaurant and is found by young waitress Rose (Carol Marsh). Pinkie strikes up a relationship with her and she falls in love with the young psychopath, bringing danger closer to home than ever before. Now, that’s all I’m saying.

Ida: I've never changed. It's like those sticks of rock. Bite one all the way down, you'll still read Brighton. That's human nature.

Do the Police catch up with Pinkie and bring him to book? Does Rose survive her ordeal? Will Brighton ever be the same again?

Under John Boulting’s direction, the audience is held spellbound for the 93 minutes duration of the movie. We want to see to what lengths Pinkie will go to protect himself and stay out of jail. We’re utterly convinced by Richard Attenborough’s performance that the coldly conniving character will do whatever it takes.This is a film made by some one who knew how to tell a story well and communicate effectively using filmic language. There was no CGI back when this was made, no gimmicky ‘pop video’ editing and violence was more often left to the imagination rather than depicted in gratuitous close ups. It’s a much more solid and satisfying film as a result.

‘Brighton Rock’ is also important as a window on a bygone age, thanks to Harry Waxman’s location photography – and it also features a different way of speaking, which helps highlight the way things including manners have changed (mostly declined) since then. The film has a well deserved place in the BFI Top 100 films and I’d encourage any true film buff who hasn’t seen it yet to take a look at this Blu-ray as it's the best version available.