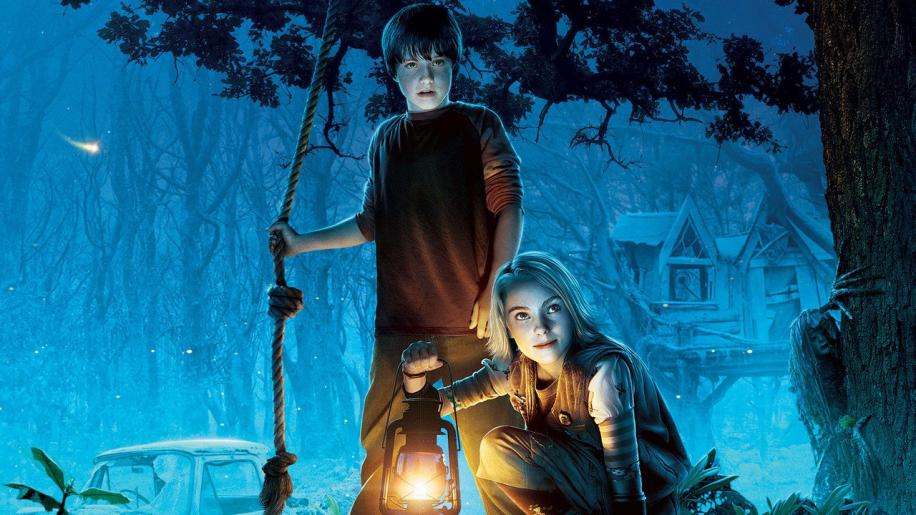 Although this is a film that a friend heavily recommended to me, Disney's production of Bridge To Terabithia was something I initially knew next to nothing about. I recall it having a lacklustre cinema outing in the UK, seemingly vanishing from the screens without much fanfare, and I knew that it was based on a popular American children's book, but that was about it. However, as you are probably aware, it is often a very refreshing and rewarding experience to go into a film without much prior knowledge. And this certainly proved to be the case with director Gabor Csupo's thoroughly pleasing nod to the beauty and power of the imagination.

Based on the novel of the same name by Katherine Paterson, Bridge To Terabithia tells the tale of eleven year olds, Jess Aarons (Josh Hutcherson) and new neighbour Leslie Burke (AnnaSophia Robb) and the imaginary world that they create in the woods at the back of their homes, a Narnia-esque kingdom that they concoct in the mystical seclusion of an old dilapidated tree-house, in order to escape from the bullies at school and the lack of understanding that Jess, in particular, finds in the apathy of his own family. Utilising their combined talents - Jess's weird and wonderful drawings and Leslie's infectious and enchanting nature - the pair paint the world around them with extraordinarily vivid fantasies that seem to come to life only for them. Lessons learned via their adventures in Terabithia, as Leslie christens their newfound realm, come to serve them well in the real world, too. Courage, comradeship and loyalty are found and the power to defeat their enemies seems just within their grasp ... but fate may just have one last terrible surprise in store for them. At first glance, and certainly by any such brief synopsis of the film, Bridge seems like perfect Disney fodder. Children in mild peril who discover their inner strength amid a land of giants and ogres, and a kingdom bristling with magic, danger and wonder - it's all here, present and correct. But Katherine Paterson's story and its screen translation, adapted by Jeff Stockwell and the author's own son David Paterson, was conceived with much deeper issues than the House of Mouse brand would usually imply. Based on a real-life tragedy that saw Paterson invent the story to help her son through such a traumatic time, the message behind it all is both darker and yet more optimistic than you might think.

Whereas the mood is predominantly one of hope and happiness when the children are in their make-believe Terabithia - itself named after a C.S. Lewis offshoot in one of his Narnia books - the film rings a disquieting note every so often that, only in hindsight, comes to signpost the inevitable outcome of such carefree summer-long fun. Once again, like all the best - well, just all - fantasy movies being made these days, Csupo uses the Antipodean Hollywood of New Zealand to weave a visual aesthetic that is, at once, familiar yet eerily removed. The homesteads, rural and in Jess's case, ramshackle, the school and a brief sojourn to the big city all could be American, but the feeling they evoke is pleasantly other. Thus the film, even when the menace and the mystery of Terabithia is not being employed, has a quality that is unique and alluring. It is actually fair to say, right here and now, that the fantasy elements only take up a relatively short amount of the running time, with the story concentrating primarily on the effects of real situations and everyday encounters. Leslie's parents are both writers and live in a fashion that Jess finds excitingly inspirational and joyous - exactly the kind of atmosphere that he hasn't got with his family. They actively encourage their daughter to use her imagination and to question things. A fact that becomes clear when Leslie insists that Jess allow her to accompany him and his family to church one Sunday and then, afterwards, she innocently, yet pertinently, questions the values of their faith with bemusement and honesty. For Jess, her liberation is intoxicating and opens doors in his mind to possibilities that he was only subconsciously aware of via his crazy doodlings. Through her deliberate and charming desire to be individual and be proud of herself, he finds the ammunition he needs to break the shackles of his own perceived imprisonment.

And in Jess, Leslie finds something simpler and more sincere. She finds a soul-mate.

Although everybody seems to sing the praises of AnnaSophia Robb, who is, admittedly, very good indeed, it is Josh Hutcherson who I feel really provides the presence and the heart and soul of the story. He acts not with the usual over-exaggeration that many facially-animated child performers employ, but with a convincing and totally realistic attitude to his environment, his interaction with others and the situations that he finds himself in. The flights of fancy that Leslie coerces him into, he initially rejects and lampoons with a credible disinterest and a notable degree of embarrassment. He is quite clearly going along with it just to be nice and to be in the company of his new friend, though underneath this male indifference, you can sense his fledgling desire to completely fall for her fairytale spell. Once things get going and Jess bolsters his innate alienation and lack of confidence with the energy of Terabithia, Hutcherson makes the transition tangible and naturally smooth - ie. by not actually changing at all. Instead he keeps his emotions reined in and only exhibited through a slowly calculated release - small victories in the classroom and a reformed self-belief in his actions at home see a fight-back that is minimal, yet still important. Viewers could certainly mistake this approach for a lack of vigour or commitment but, to me, the young actor perfectly conveys the attitude of a boy who has been harassed and belittled at school and, worse still, neglected at home. Even if the screenplay seems to downsize the bullying and, even more so, the mental and creative starvation he receives back at the ranch, Hutcherson makes these psychological blights completely apparent. His performance is one of bottled-up emotion. Jess has been ignored and sidelined for so long that he just doesn't know how to react when things go bad. He won't have any hissy-fits, that's for sure. And, folks, it is in the film's rug-pulling final third that he reveals his true colours with a show of utter disbelief, fearful loss and a grave vulnerability that I, for one, found deeply affecting. It is a shame that I can't discuss this element more deeply for fear of giving away too much, because Hutcherson does such a fine job with the crafting of his reactions and Csupo, without resorting to conventional emotive button pushing, manages a twist that is a true jolt to the system. So, folks, beware ... for besides only having short, but neat explorations of the fictitious Terabithia sprinkled throughout like specks of magic dust, the film drops a bombshell that may well have you, let alone the little ones, bawling. It definitely caught me unawares, I can tell you.

Of course, being produced in New Zealand means that the effects are going to be safe hands. Peter Jackson's own part-created company Weta Digital handle the creature effects and, by and large, they are quite pleasing. When Terabithia takes over, we have tree-footed trolls, strange swooping devil-birds, prickle-furred ground-scurriers and a giant with a face not too dissimilar to another important character in the real world. There is a definite Labyrinth-ish look to some of these denizens, purposely dumbed-down in a lot of cases, yet spookily eye-catching in others. Hats off to the wispy, blink-or-you'll-miss-him dark spirit that flits between the trees and especially the squadron of intense dragonfly super-warriors in a galvanising chase sequence that actually recalls the speeder-bike pursuit from Return Of The Jedi. None of these effects scenes seem out of place in a film that is mainly enacted in the banal reality of classrooms and the ubiquitous schoolbus - the location of many an incident, development or revelation.

Also worth mentioning is Robert Patrick, who plays Jess's hardware-store-fixated father. Forever remembered as the T-1000 from T2, Patrick is a good, gruff character actor whose performances are always understated, yet quietly powerful. He does a fine job here of portraying a father who, if not exactly forsaking attention for his son, is hardly the most affectionate or attentive type either. Where the rest of Jess's family - except for his wonderfully cute little sister who also goes to his school and is desperate to learn of the secret in the woods - are just figures in the frame of a crowded house, he, at least, offers some development to his character. The story seems to suggest that Jess is neglected at home but this may be a slight misinterpretation of what is really happening. If the bullying at school is strictly of a CBeebies degree of cruelty, then the isolation Jess suffers from his father is merely of a retreat-to-your-room-and-draw-some-pictures type of deal whenever he is asked to do his household chores. Patrick is no demon-dad. He is pressured at work and there are bills that the family is struggling to pay. He may not have the most expressive range of compassionate faces at his disposal, but there is definite warmth hiding behind that craggy façade. In fact, there is a convincing “like father, like son” attitude carried on between both Jess and his old man. Both are stoic around one another, both have a grudging form of respect. They both have issues that are getting in the way of things and both will ironically discover that these issues will eventually lead to a greater mutual understanding of one another.

The film does have a few shortcomings, though. The relationship that Jess has with his indie-cute music teacher, played by Zooey Deschanel, is a little weird and contrived. Likewise the big-armed, big-haired female bully who runs the school - well, its toilets and the back seat of the bus, at any rate - whose comeuppance and change of heart feel too damn neat, robbing the film of any real threat. And some of Leslie's Terabithian jargon and verbal world creation are cringe-worthy episodes that may make grownups wince.

But the film is still a little gem and proof-positive that the embroidery of youthful fantasy will always win out over the stagnant, time-locked paralysis of the adult mind. Thus, Csupo's film confirms the vital necessity of escapism and the genuinely magical power of pure imagination in lives that are often too short and too serious to realise it. A great film that is unafraid to address some real issues and never once condescends or patronises its audience, be they young or old.