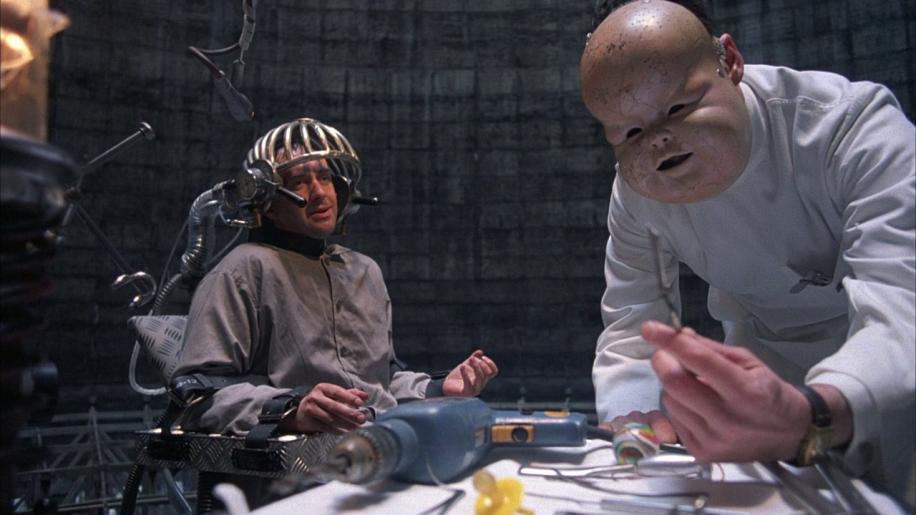 Terry Gilliam has been called a genius. He has also been called a visionary because he is, at heart, an Animat-or. He sees things that others do not. Over the years, as a Director, he has given us ‘The Life of Brian’, ‘Time Bandits’ and ‘Fear and Loathing in Las Vegas’ among others. Probably most significant among those others is ‘Brazil’, his ‘magnum opus’ as some would call it.

Released (eventually) in 1985, it’s a film with a troubled past that now sees the light of day on American Region free Blu-ray, but the new High Def version most likely won’t please case hardened Gilliam fans. To understand why, we need to go back to the mid-eighties. Gilliam had presented his 143 minute cut of the movie to studio boss Sidney Sheinberg, who took an instant dislike to the rather bleak ending, blocked its release and set about re-editing it into a 94 minute version with a ‘love conquers all’ finale that he felt would not trouble the minds of cinema going audiences so much. Gilliam threatened to disown the film and even took out a full page advert in ‘Daily Variety’ asking Sheinberg when he was going to release ‘his’ movie. To cut a long story short, a compromise version was reached with a 132 minute running time that seemed to appease both parties. While most people would have liked to see the Gilliam Director’s Cut released on Blu-ray, what we have is, in fact, the 132 minute version. Call me cynical, but this smacks of a distributor wanting two bites at the cherry.

Over the years, people have used many big words to give a ‘high brow’ feel to the story of ‘Brazil’ – lending it an almost ‘art house’ audience appeal and propelling it to the giddy heights of a Sci-Fi cult movie. Putting big words aside, the film deserves to be seen by a much wider audience as it is imaginative, funny, visually impressive and ultimately frightening. It’s also an extremely difficult movie to describe in terms of storyline as it doesn’t really follow a linear pattern. It kind of meanders and branches off the main theme as Gilliam’s eclectic mind takes the opportunity to explore various off shoots along the way. It’s like when someone is excitedly explaining a concept on the spur of the moment and, in mid flow, says “I’ve just had another idea!”

In a very tiny nutshell, it’s the tale of one man’s fight against adversity – of how a whole bureaucratic system can be thrown into chaos by something as simple as a dead fly becoming embedded in a printed document. Our hero is Sam Lowry (Jonathan Pryce) as the unambitious government employee called in to investigate a system error and in so doing he becomes an enemy of the state. While Lowry may be a lowly drone by day, he escapes into his own private dream world where he soars on delicate wings like Icarus and defends the honour of his true love like a knight in armour.

Along the way, we’re given glimpses of Python-esque humour which belies Gilliam’s TV origins. While the Monty Python TV series had to be made on tiny BBC budgets, with ‘Brazil’ Gilliam’s imagination is set free to run riot in almost any direction it pleases. The imagery is of a very mechanical retro style future, where people get excited about ducting and TV monitors are viewed through large magnifying screens hinting at a world where Lo-tech has superseded High Tech. This is humorous in itself although maybe on a deeper level there could be a warning for every IT geek.

Bob Hoskins pops up as a cheery though somewhat malevolent repair man – making us reflect upon the power wielded by people in such positions. There’s an exceedingly frightening scene where Sam is about to be tortured by his friend Lint (Michael Palin) in a baby mask and he’s encouraged to co-operate before it affects his credit rating. A laugh out loud moment, but doesn’t it seem awfully similar to refusing to pay a monthly loan when a product that has been bought on credit goes wrong and nobody will accept responsibility for fixing it.

Lowry’s mother (Katherine Helmond) pays a visit to her very busy plastic surgeon (Jim Broadbent) and we see her face being manipulated like putty. You get the feeling that maybe Gilliam woke up in the middle of the night and wrote down his dreams and nightmares to include them in the script for ‘Brazil’.

The big draw for ‘Brazil’ audiences was the appearance of Robert De Niro as the spy Harry Tuttle, although his character was somewhat underused. His name probably helped tremendously at the Box Office, although his constant demands for time to complete more research into detail caused the director to say later that he had wanted to strangle him. At the end of the day, however, it’s Jonathan Pryce who walks away with the film in the acting stakes.

The myth behind the name of the film is linked to Gilliam being at a UK beach one day. Apparently the Great British Weather was doing its utmost to dampen spirits, but a man was sitting alone on the beach listening to the famous song (‘Aquarela do Brasil’) on a radio. Gilliam was so fascinated by the determined man sitting there despite all the adversity that this became the theme for the film, while the song lent the film its title. Who knows, this might even be true!

‘Brazil’ is one of those movies that really needs more than one screening if you are to catch all the hidden meanings. Many people will not have the patience for it and simply write it off as a weird movie. I know that I did many years ago when it was released on VHS and gave up after 20 minutes. Maybe I was too young to understand it at the time or perhaps I just wasn’t in the right mood. There is a depressing air to the movie that comes from seeing the ‘little man’ being swallowed up by the gargantuan system and it could be that I, along with others, just didn’t like to see that happening – even as part of a satire. It was an uncomfortable film to watch then and it still is now, but the way the world has changed in the last 25 years has allowed the film to take on a more prophetic role.

Anti-utopian spectacle is the phrase that springs to mind in describing ‘Brazil’ – despite the fact that I said I wasn’t going to use big words.

Pay close attention to the end credits of the movie and in among the Gaffers and Best Boys, you’ll spot that Sidney Sheinberg’s name is listed as ‘Worst Boy’. Not that Gilliam held any grudges, you understand.