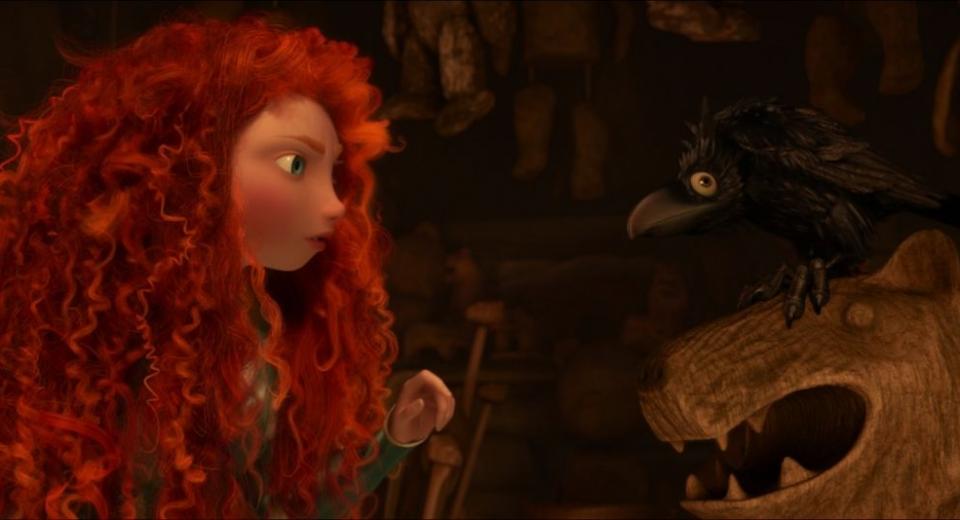 “Daddy, are there bears in Scotland then?” This was the comment from number two daughter after watching Brave. I had to Google it, as it obviously had affected her view of the film. The good news was yes, back in the dark ages there were bears in the northern part of the UK. When I broke the news, number two daughter beamed, as the film now made sense to her. The fact she spent quite a lot of it hiding behind the sofa is another matter altogether.

There have been a few big animation movies this year, with very different approaches and styles. From the adult humour of Ted to the timeless quirkiness of The Lorax, the standard has been very high and without doubt Disney Pixar’s Brave rates towards the top in the technical stakes, even if the story is slightly hard to fathom.

The official blurb states “Set in Scotland in a rugged and mythical time, "Brave" features Merida, an aspiring archer and impetuous daughter of royalty. Merida makes a reckless choice that unleashes unintended peril and forces her to spring into action to set things right.” I am not sure this really does it justice. A truer synopsis would be “Set in the wilds of Pictish Scotland, Merida, a tomboy teenage princess tries to change the world to suit herself but finds with change comes consequences. She has just 24 hours to put things right before her meddling becomes permanent”

From the opening scenes, this film is very Pixar. Their style of animation is often emulated and rarely beaten, but it is much more than the look that defines style as a whole. The music, sharp dialogue and high levels of production all contribute to final product and of course, the Disney influence can be discerned as well.

What of the plot? Set against a background of a romantic vision of wild Scotland, we are introduced to the leader of Clan Dun-Broch: King Fergus (Billy Connelly), his wife Queen Elinor (Emma Thompson) and their only daughter Young Merida. Fergus is a mountain of a man and dotes upon his young daughter. Much to the displeasure of Elinor, he gives Merida her own bow and arrows and teaches her how to shoot. Elinor knows that Merida needs to be brought up as a princess, her destiny is to marry and be refined and demure, not a tomboy with her unkempt red hair flashing behind her as she rides through the forest on her great horse. We must not forget the bears! This first scene is rudely interrupted when a great black bear attacks the family. Fergus defends his family, but the legend of the Black Bear is formed. Spool forward a few years and Merida is all grown up. Voiced by Kelly Macdonald, she is now a typical rebellious young woman, headstrong and not in the least interested in marriage or being the Princess her mother so needs her to be. Enter some magic and Merida puts her family onto a path that she never intended.

There are some really strong vocal performances here. It is great the way that even the scrawny pasty faced Billy Connolly can come across as huge beefcake of a man and a teenage tearaway can be voiced by a yummy mummy getting on for twice the age of her character. Julie Walters makes for a brilliant witch and Emma Thompson is extremely regal in her performance as well. The humour comes thick and fast, fed from interaction between the main characters and the huge entourage as well. The three young triplet sons who do nothing but cause trouble and eat are central to most of the slapstick as they have no real dialogue of their own. On the whole accents are pretty good, no doubt down to using genuine Scottish actors. Initially Reece Witherspoon was to voice Merida and we can only imagine how different the character might have been and not necessarily for the best. Kelly Macdonald is an extremely underrated actress, coming to the industry relatively late, her first role was in Trainspotting as underage temptress Diane, by which point she was already twenty. Other more child friendly roles have included Evangeline in Nanny McPhee while the Yanks know her more recently from Boardwalk Empire on HBO. Her role voicing Merida certainly cements her reputation as a good character actress never constrained by her real age. Other vocal performers in the movie include Robbie Coltrane, plus Kevin McKidd and Craig Fergusson – both Los Angeles based Scotts. They all do a sterling job and keep everything moving along nicely.

So, with Merida established as something of a hot head and mum and dad as slightly stereotypical Scottish Highlanders, what of the rest of the company? Merida has to marry one of the clan chief’s sons, according to established lore. Not only does she not want to get married, but none of these lads make a good catch, despite the claims of their respective fathers. After she humiliates them in an archery contest and throws the whole betrothal process into chaos, Merida argues with her mother and runs away. Despite her father’s best attempts to calm things down, the clans start to fight with one another and the enduring peace looks soon to be shattered. Merida has her own problems however. After meeting a witch, she persuades her to give her a spell to change her mother. Unfortunately, Merida fails to specify what the change is to be and the witch is rather mono skilled when it comes to transforming spells!

Things are not going well for Merida, her mum is walking around like a bear with a sore head, well actually she has turned into a bear with a sore head, her father is now on a mission to kill the bear, unaware it is his wife transformed and the triplets are now somewhat cuter and cuddlier than they once were having also transformed. The clans are revolting and Merida needs to wise up and quite possibly grow up as well. Only by taking on her duties as a Princess can order be restored and for life go back to normal.

There is plenty of folklore and legends wound through the tale, from the Whisps who Elinor and Merida can show you your fate to the great black bear who haunts the wild forest, it is all good stuff. The down side is there are a few confusing red herrings which spoil the flow of the story somewhat. It is also quite scary for the wee ones in places, particularly in 3D, with bears almost leaping off the screen into your lap. Even the weather gets in on the action, giving viewers a steer as to the mood of the scene – rain for sad, sun for good, that sort of thing. The glens and lochs are superbly rendered and look almost photo realistic, with gently waving trees and glistening waters all shimmering in the sunlight. The castle is a bit nondescript and the scale and topography does not really work, but this is supposed to be fantasy so it does not really matter. The rendering of the characters is simply superb, with natural flowing hair and wonderfully over the top facial expressions. Unlike Ted which of course went for realism, these are animated cartoon characters and you can’t help but fall in love with them.

The score is fresh and very listenable to in its own right. Based on slightly vamped up Scottish folk songs and instruments, Patrick Doyle has done a really good job with this. Mumford and Sons also have a song included as well, a real achievement all round.

I still cannot convince myself that the storyline hangs together as a whole. Original writer Brenda Chapman parted company with the project half way through production and the team that took over seem to have lost their way somewhat with the finer details. It is not a disaster, but whereas Shrek had a clearly defined plot, this one seems to almost end and then restart to clear up some loose ends. Most people will easily follow the plot and the usual dip that occurs 2/3rds of the way through many animated features is largely absent. The film also held my kid’s interest throughout which is a good sign, but whether this is one they will watch again is debatable.

In conclusion, an amazingly animated and presented feature, but not maybe the strongest or clearest storyline. Probably still a must have if you have younger children who will alternate between adoring the characters and be hiding behind the sofa during the scary bits!