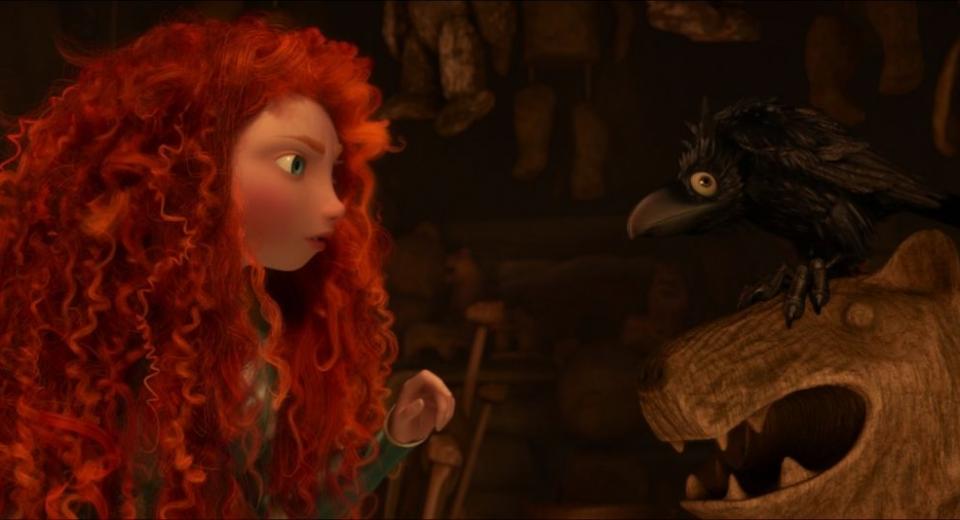 This picture score and report is based upon the 3D disc. Some comments do not apply to the 2D version. Presented as a region free 2.35:1 AVC-MPEG, the picture looks predictably very clean with a nicely muted colour palette. Even in 3D – where the makeup gain to counteract light loss through the glasses can cause loss of dynamic range, there is no obvious banding or solarising. Being an animation, exposure and contrast levels are spot on throughout, and unusually, there is plenty of shadow detail in some of the darker shots as well. It is not all good news though. Some of the action scenes – an obvious example being towards the start of the movie when Merida is riding fast through the forest on her horse, are simply too fast for 3D to work well. In fact, on my active Panasonic TV, the picture fell apart, with 2 horses strobing wildly as the TV fought to keep up. On my passive LG TV, the effect was not as noticeable, but the image was simply too confusing for my brain to make any sense of it. There are plenty of scenes where focus has been used pull the eye to detail within the frame. Maybe it’s just me, but I find this simply does not work that well in 3D. On the 2D disc, it all looks and works fine, but in 3D, other cues need to be used to focus the viewer. Pop out shots are fairly limited, but what there are do work quite well. There are a few scenes where you think that an opportunity for more pop out action has been missed. Examples would be during the fight scenes where the mere inclusion of pikes ought to suggest these need to be pricking the audience at some point. Depth looks OK, with the big mountain vistas looking particularly impressive, but there is a certain amount of layering that takes the sheen off a little. Characters do not look as rounded as some other recent releases which is a little disappointing. In 2D, the animation looks exemplary, it does feel like the 3D that is letting the side down just a little.

In a world where DTS HD-MA rules the roost, the use of a Dolby True HD 7.1 mix seems at first a little odd. The reason however is, that this film was the first ever cinematic release using the new Dolby Atmos format. This is currently a commercial only system offering unlimited channels of discrete sound tracks and huge numbers of speakers and mix-down options. The idea is to allow for very precise positioning of spot effects, dialogue and in fact anything the sound designer desires and then route it to multiple speakers with different time delays etc. to make up the final mix. It is almost like re-mastering the movie from the stem mixes and correcting for every different theatre. Current first generation processors have 128 input tracks and 64 outputs, although this first cinematic release only scratched the surface of what the format will allow. On release, only fifteen or so cinemas were equipped, but with more movies due over the next few months, including the Hobbit, we can expect more and more cinemas to become equipped in quite a short period of time. For cinemas not equipped for Atmos, a 7.1 mix was supplied and it is a version of this we get on the disc. I dread to think what our home cinema systems will start to look like with more than 64 speakers dotted around the room! Irrespective of the format, the sound track is excellent. The movie shies away from being an all on full frontal assault, but has its moments where the action vamps up and the audio follows. Dialogue can be a little buried at times, but even with the thick Scottish accents, everything is pretty clear.

The lilting, slightly pumped up Celtic sound track sits beautifully in the mix and really adds to the film. Surround sound is varied, with some scenes sounding almost monophonic, but then exploding into rear and side speakers. The sound effects have the best positioning I have heard to date with a much wider surround image than I am used to hearing from my system. This bodes well for more Atmos sourced 7.1 down mixes as they start to trickle down into the Blu-ray format.

The three disc 3D SKU is packed with extras, including a couple of movie shorts – one in 3D. La Luna is a really nice ten minute movie exploring the relationship between three generations of the same family as the they carry out their simple yet essential work.

The more “Brave” orientated extras on the 2D disc include the following:

Turning now to the extras disc, we get a third Blu-ray with a varied selection of clips and shorts:

This is a very comprehensive set of extras, but you do need to watch all three discs to see the all. Settle in for a long viewing if you choose to watch them all in one go!

Unusually for current releases, there is no Ultraviolet copy of this disc, so you will need to pay again to watch the movie on the move.

There can be no doubt this is an excellent looking and sounding movie. The weak point is the story, but it is still extremely watchable and great fun. I am not quite sure how the Scottish Tourist Board is hoping to cash in on the film, as tourists might struggle to find fictional locations from an animation in the real world! The voice talents are all really great and add authenticity to the film. Couple this with the pleasing music score and we have a winner on our hands.

The movie is great looking in 2D and not at all bad in 3D. I do have a few minor reservations regarding some of the faster scenes and a lack of roundness with some of the characters, leading to a certain amount of layering, but this does not detract from the film overall. The sound is the jewel in the crown and is one of the best to date. Quality, mix, surround steering and dialogue are all top class. It might not blow your socks off, or really test your system, but it fits the film just brilliantly.

I have no reservations in recommending this disc for both the movie itself and as a technical tour-de-force.