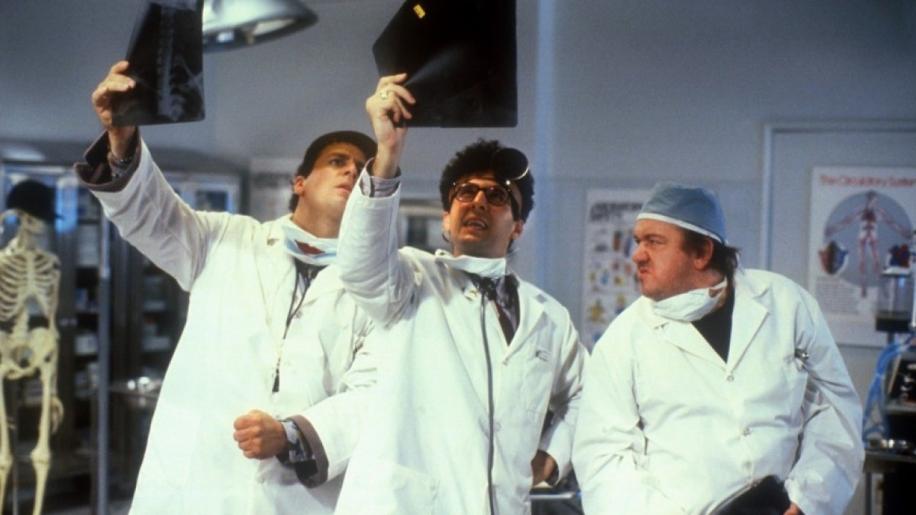 John Turturro stars as Roland T. Flakfizer, a lawyer that takes advantage of horrific accidents by supplying casualties with his business card. In this way Roland meets Lillian Oglethorpe (Nancy Marchand), an old woman who is completely taken in by his less than honest client recruitment. Things start cooking when dim home helper Jacques (Bob Nelson) contacts Roland to tell him that Lillian's very rich husband has died and she has requested Roland's presence at the will reading. Roland thinks that he is in for a windfall and so flags down a taxi driven by Rocco Melonchek (Mel Smith) and they all race to the hearing. After the three arrive, they find out that half of the inheritance is to be used to set up a ballet company, one of the late Mr Oglethorpe's lifelong loves. Naturally, Roland et al decide to start a company of their own in order to get the inheritance. Queue lots of hilarity. Or not, as the case may be.

Actually that last comment is selling Brain Donors slightly short. At first you think that the comedy is only slightly more evolved than amoeba, but after a while the comedy clicks - this is a Marx brothers movie! After that, you can take the film for the freely chaotic slapstick comedy that it is. I must admit to laughing out loud at least five times, which can't be bad. Indeed the Zucker Brothers have included some of their classic literal Airplane! humour into Brain Donors and that can't be bad either. Turturro and Mel Smith (believe it or not) are the better of the performers, with a certain Coronation Street regular turning up, too.

Frankly, I thought that Brain Donors was nearly funny most of the time and very funny at times. I get the feeling that it is aimed at the younger audience, yet this movie has an (American) PG rating which kind of scuppers the age group I was thinking of. Being aimed at the youngsters isn't to say that adults can't enjoy it, too, but some of the comedy moments are a bit too physical. A scene where a very nice young woman is found in Lillian Oglethorpe's bed and has to be removed before the old dear arrives is a case in point. Clearly she does arrive before this can happen, and there is all sorts of running between rooms and hitting-the-head-with-a-vase type shenanigans. Not exactly high brow, is it?