Once Upon a Time in South Central L.A. 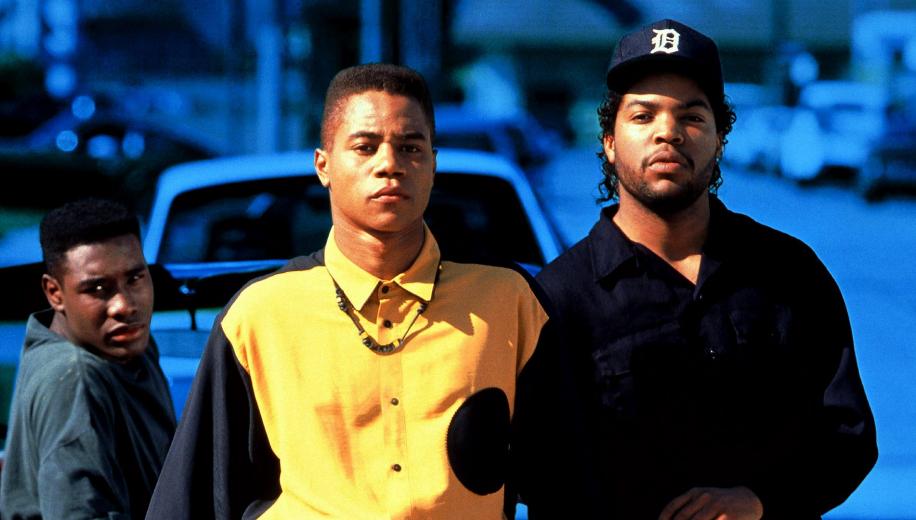 Taking his own personal experiences from growing up in South Central, and crafting them into a story which pays tribute to both seminal coming-of-age dramas like Stand By Me, and to the works of Spike Lee, Singleton’s debut is a timeless modern classic – one which earned him an Oscar Nomination at a time when it was pretty rare for black filmmakers to be acknowledged with any kind of awards. Made at just 22 (a record age, as well in terms of Oscar nods), it was a noteworthy turning point in terms of these kinds of stories, taking the usual childhood friends, who suffer life’s ups and downs and forge in different directions as they grow older; and turning it on its head by painting the alternative view of the equivalent black children, whose comparable experiences are perpetually tainted by racism, crime, and poverty; with nothing but contempt from the authorities, and little more than ambivalence from the Government.

It’s tagline was originally “Once Upon a Time in South Central L.A.”, a nod to Leone’s masterpiece, Once Upon a Time in America (less so Once Upon a Time in the West) which follows a similar tale of childhood friends whose experiences on the streets – and with the authorities and rival gangs – determine both the direction of their lives, and their ultimate fate.


Boyz n the Hood told a story that either nobody had heard before, or nobody had listened to before

Beyond this fantastic, authentic, diary-like alternative coming-of-age drama, founded in the real-life horrors of the streets, we get a whole host of then-newcomer actors, often in their breakthrough roles – delivering the performances which would go on to both kick-start their careers and, in some cases, still stand out as the high points in them. One of Lawrence Fishburne's best early era performances (perfect opposite Angela Bassett), the film also featured the likes of Cuba Gooding Jr. and Morris Chestnut, with none other than Ice Cube stealing the show.

From the corrupt police to the callous teenage killers; from the reluctant criminals to the desperate survivors – Boyz n the Hood told a story that either nobody had heard before, or nobody had listened to before; and it remains a timeless coming-of-age drama, a perfect Once Upon a Time... in South Central L.A..


Boyz n the Hood hits UK 4K Ultra HD Blu-ray a who day ahead of its US bow, boasting an unsurprisingly strong presentation from Sony, who gift it full-fat native 4K video courtesy of a 4K scan of the original camera negative.


An unsurprisingly strong presentation from Sony

Shot in 1991, as a debut feature for Singleton, this is hardly a glossy, glamorous production, but that only lends it an added air of authenticity for its snapshot of life on the streets. Nonetheless, the more gritty look, and limited sheen, make for strange bedfellows alongside the tools used to make a top tier native 4K presentation. The new 4K scan pulls up a veritably impressive level of detail from many of the shots, giving texture to the clothing, backgrounds and environments, but can't do anything with the slightly softer style that the production appears to have always wielded.

The grain level is more than intact, it's prevalent, affecting night scenes or lower lit scenes more overtly, however the colour scheme benefits from that HDR input, looking more vibrant than it has ever looked, with clothing and cars affording the most opportunities for colour pop and defying what is otherwise an understandably drab and understated, perhaps even dilapidated setting. Sony didn't have an exemplary source project to work up a storm with here in 4K but have nonetheless pulled off a strong effort which remains comfortably the best the movie has ever looked.

Perhaps somewhat surprisingly, Sony have actually opted for a Dolby Atmos 'remix' for this near-thirty year old production, gifting the feature a High Definition 3D Object-based immersive audio mix which - similarly to the video - does its best with inherently limited source material. Dialogue remains firmly prioritised, with an almost LFE-laced weight to Furious' booming, whilst effects try to bring life to the sporadic gunfire, affording some dynamics for the array to play with, and getting keen directionality as a result. Of course it's the score which arguably stands out, providing the most LFE input, and giving a new lease of life to some of the song tracks which define the piece. Hardly a demo Atmos track, it's a strong effort nonetheless.

Sony push the boat out on the extras front, bringing all of the extras from their 20th Anniversary set on the accompanying Blu-ray - the Director's Commentary, a couple of hefty Documentaries, some Deleted Scenes and Audition Footage, and some Music Videos - as well as providing new ones on the 4K disc itself.


Sony push the boat out on the extras front

The 4K disc affords a new Tribute to Director John Singleton, a new Theatrical Press Conference Featurette, a new Behind the Scenes Featurette and the Original Trailer, and whilst it's hardly an extensive effort, coupled with the existing material it's an impressive package.

A very good set
Boyz in the Hood is powerful and poignant, and feels just as relevant now as it was almost thirty years ago, which really is quite a sobering thought. Sony's 4K Ultra HD Blu-ray disc delivers strong native 4K video and Dolby Atmos audio given the source material they were working with, as well as a few nice new extras to offer a cherry on top of the healthy set of extras from the old Blu-ray. It's a very good set.