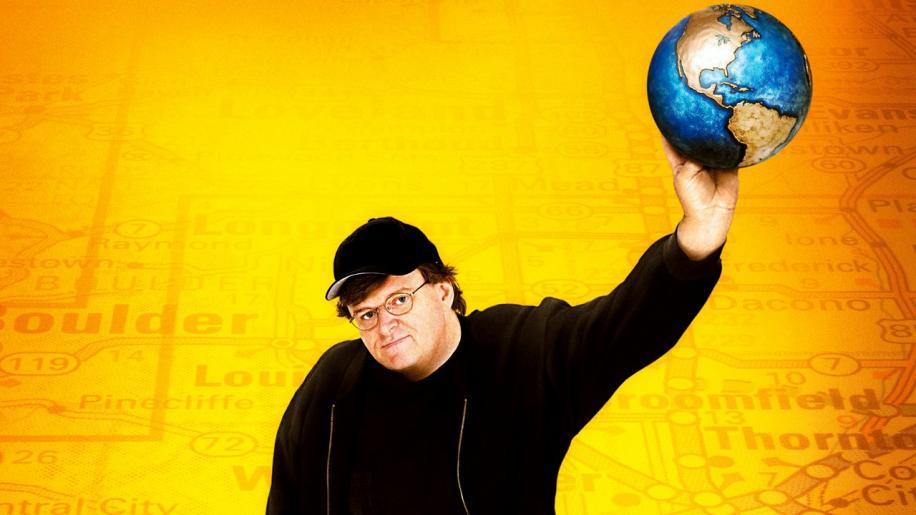 As a documentary the 1.85:1 anamorphic transfer looks very good indeed. Filmed with hand held cameras and using a large amount of stock footage of recent disasters and news footage, the image holds up very well. Colours and fine detail are inconsistent throughout but this never distracts from the main feature, or your enjoyment of it. This print will never be up there with the best movie transfers, but that's the point, it is gritty with plenty of grain and gives the subject matter the correct impact for the screen. There are no problems with digital artefacts or dot crawl, and overall it is a very acceptable effort. Presented in Dolby Digital 5.1 the soundtrack is very work like and acceptable. Don't expect any surround effects or deep bass it just isn't that type of feature. The front three channels carry an awful lot of dialogue which is always crystal clear and intelligible. First up is a commentary track, but sadly this is not by Moore himself, he has recently stated that he says all he needs to say in the film. Instead the commentary is presented by receptionists and interns which although adding some decent titbits; I would have preferred to hear some counter arguments from politicians or political commentators on the issues raised.

Did anyone see Michael Moore's controversial acceptance speech at the Oscars? If you didn't then sadly you won't see it here either. The academy refused permission for the speech to be featured as an extra, so instead we get a 12 minute interview with Moore as he goes through the moment he won the Ocsar and his speech. This is interesting but I would have enjoyed it more if we had been shown the actual speech.

The Return to Denver feature shows Moore's visit back to Denver University 6 months after the release of the movie and gives an insight into his motives for making the movie. Some of what he says during his speech is uncomfortable viewing for those with more conservative views on the world, but when we see Moore signing books for Students after the speech, he is confronted by a graduate of Columbine School and I have to say it even moved me to tears, a very touching moment indeed.

Also included as extras are a feature covering the various film festivals, an extended corporate cops feature, a 25 minute interview with Charlie Rose, a Marilyn Manson music video and finally the usual photo galleries, trailers and a final 25 minute interview including Joe Lockhart. Bowling for Columbine raises more questions than it answers, but that is the whole point. It aims to be controversial and succeeds, it will be the subject of many arguments for many years to come. I would regard this as essential viewing and is highly recommended.