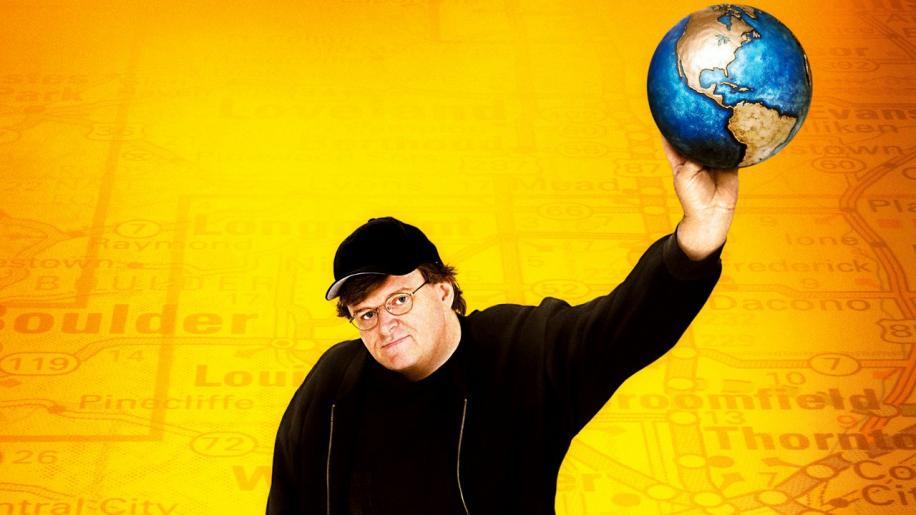 Michael Moore has always been a controversial figure in public life, and is a film maker who likes to give you the facts, as he sees them, straight in your face. He enjoys championing the under dog and his political views are usually against whichever government, or major corporation that takes advantage of their power to use or abuse normal citizens. You may disagree with many of Moore's motives or his conclusions on various issues, but at least he gets people talking and arguing the important questions in today's society. Bowling for Columbine is Moore's attempt to take a serious look at Americas love affair with the gun and the American public's attitude towards gun laws and recent high profile shootings in the country.

The documentary centres on the tragic High School shootings in Columbine back in 1999. Two students, close to graduation, go bowling in the morning like they normally do, and then attend their school opening fire on other students with an arsenal of automatic weapons, killing many. Moore tries to find the answers behind why these teenagers would commit the ultimate crime, before turning the guns on themselves. Although centring on this tragic incident Moore takes his arguments from different sources and groups within America. He also visits Canada, a country with 10 million households and where 7 million of those have guns, yet the murder rate using such weapons is less than the UK at 64. Most of Canada's residents also leave their doors open, a point which Moore illustrates by walking down a neighbourhood trying every door, which are all open and unlocked. He draws the conclusion that maybe it is the different approach to the media which causes the fear of crime to be higher in the US, a point which he seems to successfully demonstrate.

Moore also investigates the arguments that Music and Movies are behind the warped minds of those who would perpetrate such crimes as those in Columbine. He interviews two controversial figures in each field, starting with Matt Stone (creator of “South Park”) and also includes controversial rock star Marilyn Manson. Both interviewees give compelling counter arguments, with Manson in particular providing even more questions on today's society.

The documentary also encompasses more tragic incidents including the shooting of a 6 year old girl by a similar aged boy in a nursery. This takes him on a crusade against the NRA (the national rife association which Moore is a member, who held a rally in Columbine days after the shootings, and did the same after the 6 yr old shootings, raising tensions) and he also investigates the work for welfare scheme, which he believes was partially responsible for causing the tragedies. He ends his plight against the NRA by interviewing the president of the organisation Charleton Heston, with interesting results.

Always controversial and I suppose quite one sided, you can't help but be moved by the people and subjects which Moore covers, and the emotional rollercoaster can be quite intense. The highlight for me was the quite emotional reaction to a major US Retailer deciding to withdraw 9mm ammunition from sale in all its US stores, a real victory for Moore. There have been many claims since the release of the film that certain situations and facts were set up, staged or just untrue, but the underling issue must be that Moore's film is a huge success in getting people to debate the issues, and that's master movie making in my mind. Recommended viewing.