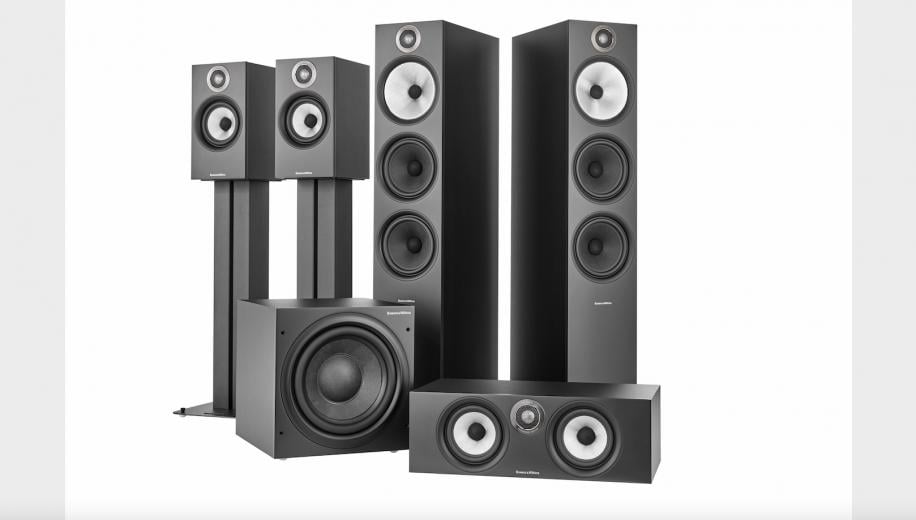 The Bowers & Wilkins 600 S2 Series Anniversary Edition is an upgraded version of the company's current entry-level speakers, incorporating various sonic tweaks to celebrate the 25th anniversary of an iconic range of affordable speakers. This is the seventh generation of the speaker, and offers numerous component improvements over the previous iteration of the 600 Series, which was introduced at the back-end of 2018.

The Anniversary Edition boasts a new version of the aluminium decoupled double dome tweeter, with an upgraded neodymium magnet from the 700 Series. The diaphragm has also been subtly but effectively repositioned within the diaphragm mounting plate to improve time alignment. The tweeter features an anniversary logo-inscribed surround, and uses the mesh grille from the 700 S2 Series.

These aren’t the only upgrades ported over from the more expensive range, with the entire Anniversary Edition line-up also using improved bypass capacitors at every position on every crossover. The capacitors have been specially treated by Mundorf and were originally introduced on the recently launched 700 Signature Series.

Bowers has also tweaked the Continuum midrange driver, improving the resolution and transparency across all the 600 S2 speakers. This includes an upgraded chassis and an anti-resonance plug from the 700 S2 range. There’s also a new paper bass driver in a hybrid design featuring an upgraded ferrite magnet similar to the one used in the original CM Series.

While these changes aren't huge, due to the fact the 600 Series resides in a very competitive segment of the market, B&W claims they will deliver greatly improved resolution and transparency across all of the Anniversary Edition speakers.

We reviewed the previous generation of the 600 Series back in early 2019, and since I'm not in a position to compare the two directly I'm going to have to rely on my notes and memory. So let's see how the 600 S2 Series performs, and whether it's worth the upgrade.

The 603 S2 Anniversary Edition is a surprisingly big three-way floorstander that costs £1,499 a pair. It uses a 1-inch aluminium tweeter at the top, a 6-inch Continuum bass/midrange driver mounted beneath, and a pair of 6.5-inch paper bass drivers towards the bottom. The speakers are rear-ported, and have a nominal impedance of 8Ω, a claimed sensitivity of 88.5dB, and a claimed frequency response that goes down to 48Hz.

There’s an included plinth, which adds stability but makes the speaker heavier, and the overall build quality is excellent. The design is clean and simple, with an attractive silver trim around the tweeter and the distinctive silver weave of the Continuum drivers. You can choose from three finishes: black with matching grille, white with a grey grille, or oak with a grey grille. At the rear are the usual dual binding posts for those who like to bi-amp or bi-wire, and the 603 S2 measures 190 x 1055 x 340mm (WxHxD) and weighs in at 24.1kg.

The Bowers & Wilkins HTM6 S2 Anniversary Edition is a dedicated centre speaker designed to blend seamlessly with other models in the 600 S2 Series. This rear-ported unit uses two 5-inch Continuum bass/midrange drivers on either side of a 1-inch aluminium tweeter. The nominal impedance is 8Ω, the claimed sensitivity is 87dB, and a claimed frequency response goes down to 72Hz.

The HTM6 S2 offers the same level of build quality as the floorstanders, with a nicely machined and minimalist chassis. It also provides the same choice of finishes: black, white, or oak. There are dual binding posts at the rear, and the centre speaker measures 480 x 160 x 255mm (WxHxD), weighs 7.8kg, and costs £449.

The Bowers & Wilkins 607 S2 Anniversary Edition standmount speaker uses the same 1-inch aluminium tweeter and 5-inch Continuum bass/midrange driver as the HTM6 S2 and, like the other speakers in this range, is rear-ported. The speaker has a nominal impedance of 8Ω, a claimed sensitivity of 84dB, and a frequency response that goes down to 52Hz.

The Bowers & Wilkins ASW610 subwoofer is unchanged, and handles the lower frequencies in this 600 S2 Anniversary Edition 5.1-channel system. The sealed cabinet boasts a forward-firing long-throw 10-inch paper/Aramid fibre cone driver, powered by 200W of built-in Class D amplification. The sub has a claimed frequency response of 27-140Hz and comes with a choice of rubber or spiked feet. The styling matches the rest of the range, and the sub comes in a choice of matte black or matte white, with black or grey fabric grilles that attach using fasteners rather than magnets.

The Bowers & Wilkins 600 S2 Anniversary Edition 5.1-channel speaker system was tested in a dedicated home cinema. The 603 S2 floorstanding speakers were positioned at the front of the room on either side of the projector screen, the HTM6 S2 centre speaker between them, and the 607 S2 standmount speakers at the sides and just behind the main listening position. The ASW610 sub was placed at the front of the room, in location known to have a balanced bass response. The 600 S2 Series is fairly flexible in terms of positioning, making them relatively straightforward to set-up.

The 600 S2 Series is flexible and easy to set-up, with this 5.1-channel system tested in a dedicated home cinema

The B&W 600 S2 Series 5.1 system was tested with a mixture of material ranging from Blu-ray and Ultra HD Blu-ray, CD, DVD-Audio, SACD and music streaming. The primary sources were the Panasonic DP-UB9000 4K Blu-ray player, and the Apple TV 4K. The processing was handled by our Lyngdorf MP-60 reference AV processor (primarily with RoomPerfect turned off), and the amplification was provided by the Emotiva XPA-11 Gen3 power amplifier.

The Bowers & Wilkins 600 S2 Anniversary Edition impressed right out of the gate as a system, and the 603 S2 floorstanders were especially impressive. If you give these beauties plenty of juice they’ll deliver the goods, creating a soundstage that’s both wide and accurate with a pleasing musicality. They also have some decent bass extension, with those two optimised low-frequency cones providing genuine depth.

In terms of two-channel, Good Luck, Seeker by The Waterboys reveals some excellent stereo imaging, combined with clarity and detail. The Continuum drivers provide a neutral signature that provides Mike Scott’s vocals and his eclectic choice of instruments with clear definition. My Wanderings in the Weary Land is delivered with dynamic attack, emphasising its driving guitars and thumping drums. Conversely Low Down in the Broom offers delicate acoustic guitar and fiddle.

Moving on to 5.1-channel audio, the live Blu-ray of the Nick Mason’s Saucerful of Secrets provides a suitably immersive experience. The system works in perfect tonal balance thanks to its matching drivers, and there’s an undeniable sense of overall cohesion. There's an accuracy to the delivery that gives the extended riffs of Astronomy Domine a suitably psychedelic presence, while Interstellar Overdrive proves to be an epically musical freak-out.

The film Whiplash is another great test of the musical abilities of these speakers, and given the plot centres on an ambitious jazz drummer, the soundtrack is also the perfect opportunity to evaluate the 600 S2 system's ability to deliver deep, tight and well-integrated bass. In general, the speakers and subwoofer handle the complex drumming with skill, picking out the drum rolls with aggression and the high frequency detailing of the cymbals with precision.

The sonic tweaks are relatively minor, but this remains a neutral, capable and hugely enjoyable speaker range

The 603 S2 floorstanders do much of the low-end heavy lifting, giving the ASW610 an easier job of delivering the really deep effects. However, there were times when it felt like the subwoofer was slightly underpowered, especially with a film like Godzilla: King of the Monsters and its floor-shaking LFE track. As a result, I’d be more inclined to build this system around the more powerful ASW610XP or, better still, the excellent BK Electronics PK-300SB-PR.

Stanley Kubrick's Full Metal Jacket is a film of two halves, with the dialogue-heavy boot-camp of the first section providing an opportunity to test the clarity and delivery of the HTM6 S2 centre speaker. During the training sequences, the drill instructor's barrage of foul-mouthed insults are delivered with unflinching and focused accuracy. B&W may have made the centre speaker smaller to better fit into installations, but it manages to retain a wide delivery.

The second half of the film is dominated by the Battle of Hue, and here is where the system created a sense of scale that matched the action. When tanks and troops open fire on some buildings, the explosions hit with shattering force and bullets riddle the brickwork. There's a visceral feeling of claustrophobic street fighting, with bullets whizzing past your head as effects are steered seamlessly from one speaker to another, and ricochets hitting all around you.

Sticking with Kubrick, The Shining retains its ability to scare thanks to a carefully crafted soundtrack that generates an uneasy sense of dread. The unnerving score by Wendy Carlos often catches you unawares, and the mix uses sudden changes in dynamic range to give the images on screen greater impact. The speakers handle the transients with skill, revealing an ability to react quickly while also creating an accomplished multi-channel and multi-layered sonic experience..

The Bowers & Wilkins 600 S2 Anniversary Edition benefits from a few minor sonic tweaks, but based on memory it sounds largely the same as the previous generation. However that's not a bad thing, because the earlier range was excellent and the upgraded 600 S2 Series remains an impressive entry-level option that delivers a precise, transparent and hugely entertaining performance.

Despite their more affordable price tag, they also retain the same minimalist styling and excellent level of build quality and performance. The results remain eye-catching, with an elegant and logo-inscribed silver trim around the tweeters, the silver Continuum weave on the bass/midrange drivers, and the addition of an oak finish to join the existing black and white options.

The 603 S2 floorstanders provide a solid front soundstage, and integrate well with the HTM6 S2 centre speaker, while the 607 S2 standmounts do a great job as surrounds. The result is a balanced and tonally cohesive system, with a solid bass foundation thanks to the ASW610 subwoofer, although the latter doesn't go as deep as this system deserves.

As a result, the Bowers & Wilkins 600 S2 Anniversary Edition 5.1-channel speaker package is capable of delivering a dynamic and engaging sonic performance that comes highly recommended, and makes a fitting celebration of 25 years of affordable excellence.

There are a number of excellent and cheaper alternatives, starting with the Polk Audio Signature E Series. This cracking 5.1-channel speaker package can be picked up for around £1,600, and will work just as well when handling both Hi-Fi and home cinema duties. The system itself looks charming, offers excellent value and delivers an undeniably enjoyable sonic performance.

The speakers are dynamic and responsive, quickly reacting to transients, while remaining very easy to drive. As a result, they retain plenty of detail and clarity, even at lower volumes. Thanks to the inclusion of bass ports, they are also capable of more low-end impact than you might imagine. Like the B&W system, the sub lacks depth but, otherwise, this is a great speaker package.

The similarly-priced Acoustic Energy AE300 Series is another excellent alternative. The company concentrates on what it does best, and the resulting 5.1-channel speaker package delivers a highly accurate performance that produces a fantastically cohesive soundstage. These speakers are refined, dynamic and above all fun, with a classic look and an impressive level of build quality.

Once again, the only real weak link is AE308 subwoofer, which doesn’t go deep enough to fully support the rest of the system. But overall, this speaker package is capable of a fantastic multichannel performance. Acoustic Energy has stuck to its guns, and in doing so has produced a speaker package that's highly engaging and worthy of consideration.