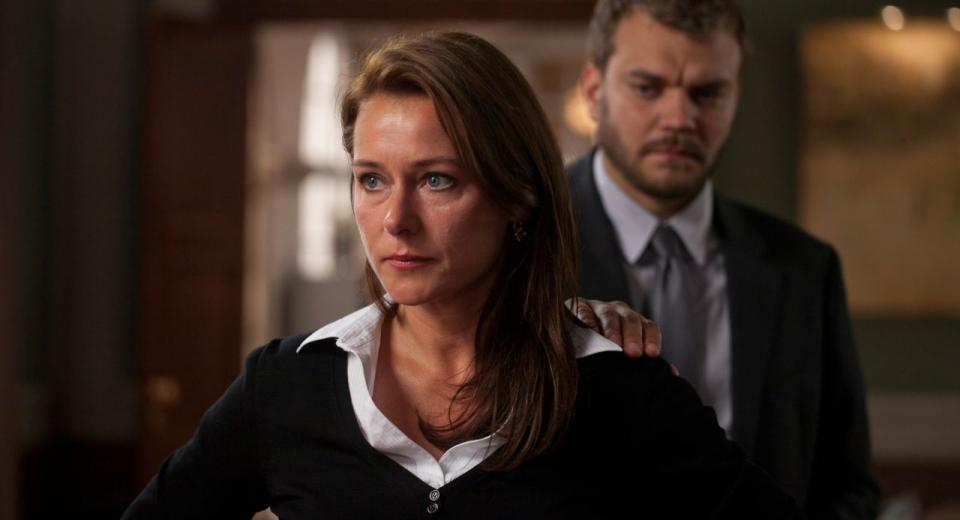 Borgen, in Danish, means ‘the Castle’. The Castle is a nickname given by the Danish to the Christiansborg Palace, a huge, and ancient, building in central Copenhagen which houses all three branches of their government: the Parliament, the Prime Minister's Office and the Supreme Court. It is also the title of tonight’s feature, a made for television series following the exploits of political power in the Danish government which is fast winning numerous awards for excellence in drama throughout the globe, including the BAFTAs who bestowed it with a ‘Best International Award’ last year. And it is easy to see why, as it portrays very realistic situations within the broad scope of its political backdrop, top class script writing and storytelling, compelling plot developments, believable and top class acting talent all wrapped up as thoroughly engaging entertainment. In the best echelons of television drama, this particular series must rank somewhere among the top, even with regard to my own choices from last year. Draw together your allies and form a strong coalition as we plunge into the corridors of power in tonight’s feature presentation: Borgen.

Borgen is into its third season, the first dealt with the main character’s rise to power, the allegiances she made and the circumstances that conspired to see her as Denmark’s first Prime Minister (real life has since emulated art). We also meet the other main players of the series, the spin doctor, other political figures, members of the press and the various partners and spouses whose intermingled background stories help prop up the main story thrust, making all the characters well rounded and believable. The second season, now reviewed, picks up just eleven months (around the actual recording break between seasons) after the events in the first and throws you directly into the action. After a very brief recap of the salient moments from season one needed to appreciate this opening episode (each new episode follows this format, recapping only the highlights required to understand the background) we find ourselves in war torn Afghanistan as the Prime Minister visits the Danish troops stationed there. The PM is called Birgitte Nyborg and is still well liked and, indeed, something of a celebrity due to her status, with soldiers pleased to meet her and insisting that they have their photo taken alongside her. She is in the camp to inform the soldiers of Denmark’s admiration for the armed forces and that with the conflict coming to a close she, with her parties backing, wishes to see a withdrawal of troops from the region. Unfortunately, using this information the Taliban attack a number of patrols trying to win a ‘moral victory’ as ‘the invading nations flee’, all of which results in the highest death rate (eight) in a very short period of time; this forces drastic strategic manipulation and machinations for the PM, her coalition and the shadow government – in what sets the tone for the whole of the second season.

Nyborg is played by character actress Sidse Babett Knudsen and, not to put too finer point on it, is perfect for the role. In her early forties she is around the same age as her real life counterpart but plays the role far beyond her years. The character has made her way in politics by being strong, independent, very well educated (she speaks at least three different languages fluently) and confident, but above all communicative with her peers and that gives her the respect she has earned. In her private life she is married with two children, though the climax of season one saw her husband asking for a divorce. Knudsen manages to balance the confidence of the PM as a leader with the vulnerability of a hurt mother and wife struggling to do the best for her family and her country. Scenes of her standing up to and leading in an all-male political environment, empowered and respected, juxtaposed with fear and needing the companionship of her failed marriage hammer home the complex nature of trying to live one’s life, irrespective of profession. She puts an all too human face on the politician trying to salvage what she can by simple stalling tactics to sign the divorce papers. Later her heartache at hearing her soon-to-be ex-husband enjoying a new lady in his life and the prospect of her children getting to know this person as a ‘new mother’ is tangible – especially if one has already lived through the experience – it’s not forced, just expertly seen and acted to perfection. Yet when she commands her authority in the office, you sit up and listen, junior ministers that try to out manoeuvre her swiftly come to a sticky end with the spite and hurt from the betrayal hidden behind her eyes as she exacts her plans. Knudsen nails it every time and you can see her as the Prime Minister; she makes it look effortless and that is why she is so good in the role. As the season progresses and the stresses of international politics begin to take their toll, Nyborg increasingly finds herself making questionable compromises but always with the stability of the country in mind.

Of course a PM is never alone in office, and Nyborg is no different. Her closest confidante, outside of her cabinet, is the spin-doctor Kasper Juul. Already known for his, at times, underhanded dealing (from the first season that saw him fired, but reluctantly rehired) he has become invaluable to Nyborg with his never ending stream of positive spin and tactics for looking good for the press and addressing a crowd. Played with aplomb by Johan Philip Asbæk who manages to make what should be a very unlikeable character, likeable. With his good looks, charm and skill at manipulating a situation for the best outcome (particularly with the press) he could have the world on his plate, if only he could sort out his personal life. Even after moving in with his new girlfriend he still pines after his ex and with situation and circumstance on his side, things do go from better to best and back again! The ex in question is Katrine Fønsmark, the journalist with a head for a good story and the will to see it through. Played by Birgitte Hjort Sørensen, she gives Fønsmark a headstrong-with-a-hint-of-caring personality, who makes her mark in another male dominated profession by being extremely good at her job with a strict moral compass. She wishes to write stories and articles without heavy handed censorship or any editorial pressure to falsify facts – this is somewhat hampered by the fact that she writes for a tabloid paper where even the political section is at the whims of an editor with his own agenda. But it is in Fønsmark’s nature to advance her career by making the best move she can (she resigned from her TV interviewer post in the first season due to her fearing loss of editorial control) and this season sees her making some very tough choices, not least an affair with Juul and standing up to her editor when underhanded tactics surface regarding breaking news.

But what of the press as its own entity? We all know how the tabloids harass and belittle those in authority and whist it’s not in the same league as here, Denmark has its fair share of scandal. As presented the press has two faces those on TV and that of the tabloid, but both react to information leaked or presented to them by the political offices, be it the shadow government, or disgruntled ministers within the parties in power trying to manipulate a situation to their own advantage. This can have devastating repercussions for those in power, even if the rumours circulating are false and intended to smear. In this respect the press is portrayed as very realistic – they are not ‘out for blood’ (with one possible exception) but are willing to get the best story. What I really like is the way that the makers use press bulletins and reports as story telling device as situations develop during episodes. The reactions of those in the firing line are also examined, never gratuitously, but always honestly and this gives another layer of realism to the story.

Episodes topics are wide-ranging but always have a basis in reality either by the events unfolding or the why character behave in certain situations. And like the very best TV series’ the episode plot almost come second to the characters and their individual backstories, all of whom draw you into the story being told – it is because you are invested in them that the writers can take you anywhere. Even the ‘incidental’ characters have motivations and arcs to follow. This coupled with universally excellent performances from all the actors involved makes for some very compelling viewing. The series has been likened to a Danish ‘The West Wing’ and to be fair that is not an unfair comparison; however being European there is a clear similarity to the British political structure (particularly our own current coalition government) making this a far more relevant series. My only concern is that due to its Danish language nature, and therefore being a subtitled series, there are many potential viewers that will be turned off because they have to ‘read the telly’. This is a great shame, because as I have hoped to get across, this show is a powerhouse of entertainment that grips you from the beginning and has you wanting more. Each episode is an hour long but you would never know that when you watch it, such is the engagement. And such is the writing that you can come to this season without seeing the first and still get great enjoyment from it. I did! And with the American networks already looking at a remake, please catch it while it is pure and unsullied. Highly Recommended.