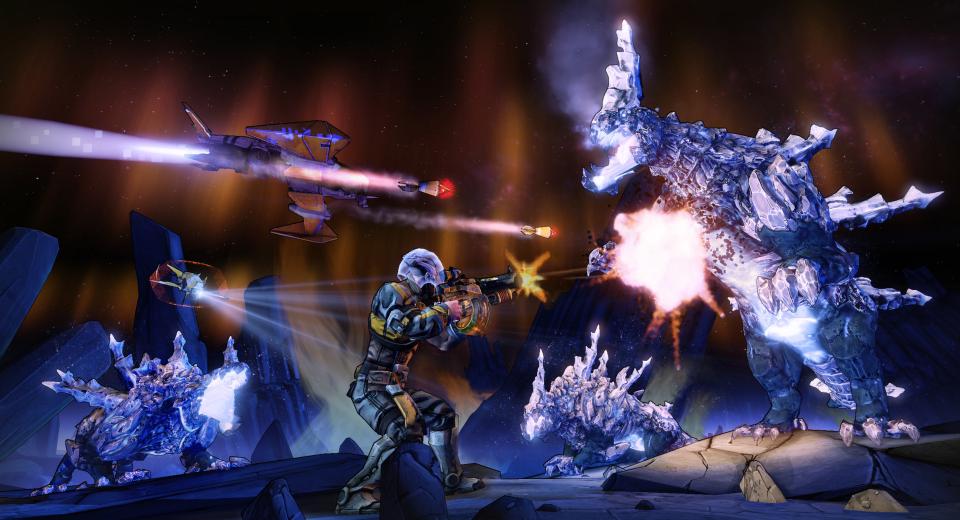 It will probably come as no surprise, but Borderlands: The Pre-Sequel is more of the same formula provided by Borderlands 2.

For many people, that won’t necessarily be an issue as the previous title proved to be crazy and entertaining in equal measures.

But given the length of time between Borderlands 2 and this Pre-Sequel, it feels like it is high time we had something new rather than something overly familiar.

Whilst it might have a silly name, the Pre-Sequel fails to live up to the same levels of craziness that the first two games achieved.
Telling the tale of Handsome Jack, you discover how he came to be in control of the robot army with which he tries to annihilate you in the second title.

Now, there are two overriding problems with this; the first being that we already know how Jack turns out, so there is a niggling feeling of "why am I bothering to do this, and why should I care?"

Then there’s the even bigger issue of the whole story not being that interesting, in fact it is quite boring in most instances. You play as one of four Vault Hunters again, with the intention of helping Jack re-take control of his space station. The majority of the game takes place on Elpis, the moon which you could see from Pandora but never visit. This is where the Pre-Sequel brings its own features and mechanics to the party, helping stave off that feeling of familiarity for a short while.

Naturally, being set on the moon, your missions take place in low gravity environments and in some cases, zero oxygen areas too. These two combined create some interesting scenarios where you find yourself leaping between cover, over enemies to gain a tactical advantage or to find Oxygen to refill your mask.

The low gravity leaping can be used to your advantage, with a press of the crouch button you can butt slam back down to earth dealing damage to any nearby enemies. You can also bounce off enemies' heads much like in Super Mario, something you’d never expect from a shooter. Adding to this there’s the new elemental ice damage (which has been an odd omission up to this point it must be said) and the laser weapons which also add to the already expansive catalogue of arms.

Is the Pre Sequel more of an expansion? Herein lies the problem with the Pre-Sequel; there aren’t enough new features or ideas to make this feel like much more than what should have been an expansion pack, as opposed to a standalone release. It’s an odd beast, as not only does it sit between the two main games with its story, but it also seems to fit between the pair in quality too. The game isn’t finished with the same level of quality or finesse that the second was, which works against it constantly.

The scale of the game is an initial flaw, along with the variety of the environments with no stand-out areas which make travel enjoyable or worth stopping off to look at between missions. You don’t necessarily feel compelled to see what’s off the beaten track as, more often than not, it doesn’t lead anywhere. Elpis being small wouldn’t be an issue if you felt like it was densely populated, but for a small world there is a lot of dead space in between the settlements and animal lairs. Concordia acts as the home city, much like Sanctuary did in Borderlands 2, where you can find new missions, sell weapons and create new ones thanks to the Grinder. Some cameo appearances from familiar faces such as Moxxi and Roland make the surrounding seem less daunting, but their presence seems like a token gesture as opposed to one that is totally necessary. Much of the crazy scripting and dialogue has been lost in transition from the last title, with a lot of the fun coming from the randomness found in the missions and encounters with NPCs scattered around Pandora. Bar a few humorous moments, the script is filled with popular and modern colloquialisms which seem ill-fitting most of the time.

What is strange about the Pre-Sequel is that it isn’t a bad game, in its own right it is a perfectly welcome addition to the Borderlands franchise. Having being spoiled by the quality of Borderlands 2, this just falls short of the levels of quality that were observed in the last release. If this was a hefty expansion pack for Borderlands 2, rather than a standalone release, then it probably wouldn’t feel so much of a let-down. But with AI that is patchy at best, and a checkpoint system that can see you schlepping a fair distance to get back to where you were originally killed, it’s hard to recommend this to anyone but the most diehard of Borderlands fans.

The Pre-Sequel is a perfectly acceptable game in its own right, but it is one that can be trawled through with less care or thought than the games that came before it. Mechanically it is sound and sending bodies into orbit or popping heads with a sniper rifle is sadistically satisfying. Sadly though the story and script isn't as thorough or entertaining as it should be, with little in the way of 'new' features which make this an enticing proposition over the bigger and better game that is Borderlands 2.

Having launched on last gen consoles and PC only will only harm this game too, as many will probably leave this in favour of new games on their new systems. But if you're a true fan of the franchise, then this is a suitable addition to the series and will briefly fill the gap whilst we wait for Borderlands 3 to eventually land.