Not quite Claptrap, but not as good as it should be 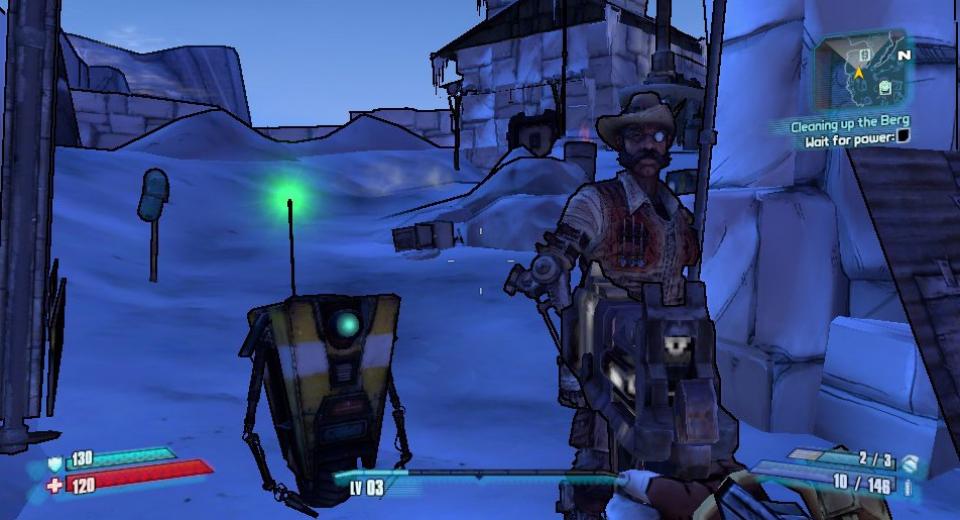 The Vita is a powerful little machine and capable of great things, yet of late there have been few games solely for the portable which have demonstrated this.

As it stands, the platform has been supported by titles which were originally on the PS3 but have now been optimised for the handheld.

By no stretch of the imagination is this a bad thing; as the PS4 isn’t backwards compatible with PS3 titles ,it’s great to play those previous generation games on the move.

So, as the Vita begins getting more support, the bigger and better titles of the last generation start getting the Vita treatment.
In the case of Borderlands 2, the Vita treatment consists of slimming and trimming in order to squeeze everything onto the cartridge.

It can’t have been an easy task optimising such a huge game for a console that is significantly weaker than the PS3. In some cases, the outcome of this process is shown in the overall quality. The phrase, ‘The worst version of a good game’ would probably suit Borderlands’ Vita outing perfectly, as there is nothing wrong with the game itself, but the scrimping process is evident throughout the entire package. Given the PS Vita is less powerful than the PS3 this is hardly unexpected but anyone who has spent a significant amount of time with the home console version will see where sacrifices have been made. The Borderlands series prides itself on its art style - the developers still maintaining it isn’t cel-shading - and you’d expect this type of aesthetic to shine on the Vita’s screen.

It’s amazing to see that a lot of detail remains in the environments and textures in this version and the vibrant colour and world stand out beautifully. Understandably the game can be slow at times with delayed texture loading times and being quite sluggish when things get hectic on the screen.

The overall nature of Borderlands 2 seems to be an ill-fitting match for the Vita given that it is mainly a twitch shooter. The small screen and the smaller thumb sticks make it hard to play the game as it should be played - just running and gunning. You find yourself taking more time in making decisions and taking down bandits and beasts which isn’t really something Borderlands is known for. Where you’d find yourself ripping through a few weaker foes in quick succession on the PS3, you may find yourself struggling to make shots count here, as more precise shots and tactical grenade throws are harder to accomplish.

A touch off putting Grenades are now mapped to the touchscreen, which is a nice idea, but they’re only activated in the bottom right of the screen, resulting in a few awkward moments. Similarly melee attacks are now on the right of the rear touch pad, again meaning that a stray digit can initiate a physical attack in the heat of battle when it's not needed.

Sprinting is on the left side of the rear pad and falls foul of the same problems as melee attacks do; an accidental tap can see you charge into battle when you were trying to be stealthy. The comedy and inventive nature of the story hasn’t been lost in the transition between the two formats though, which is nice to see. The dialogue and radio chatter is still in place, nothing has been removed or altered and this once again makes the story a joy to charge through. For those that are still playing the game on PS3, there is also a cross-save feature which allows you to keep playing the same save stream no matter where you are.

The AI leaves a little to desired however as their stupidity is hard to ignore at times. It was never first class on the PS3, but it’s more noticeable on Vita when some enemies stand out of cover for bizarre reasons and sometimes don’t even fire back at you. Occassionally this is a benefit when you consider the often awkward controls and it serves to make firefights a bit easier. It’s the animal and beast-like enemies that cause the problems as they don’t hold anything back and still swarm in an attempt to overwhelm and take you down.

Given its age, Borderlands 2 has received plenty of post-release support in the form of downloadable content, which has varied in quality. All of which can be found in its complete re-release edition on the PS3 and sadly a lot of the good stuff has been left out of this version. Whilst it couldn’t fit on the cartridge, you can’t help but feel perhaps some of it could be released to be stored on the unit's memory card to be accessed from there.

Borderlands 2 is a great game, but this is its weakest outing to date. Granted, the Vita version allows you to play on the go and maintain the same save game on both the home and portable consoles. But it's unlikely that you're still playing Borderlands 2 on your PS3 and will likely have moved onto other games by now.

This version probably should have come sooner, to make better use of the cross-save feature, as this feels like a bare bones re-release with very little extra content available for it. But if you're willing to give Borderlands 2 one last hurrah before the pre-sequel comes later in the year then this is worth picking up, particularly if you need to pass the time whilst stuck on the bus or find it hard to get the required TV time when the soaps are on...