"What is more dangerous, the virus or the Democrat? 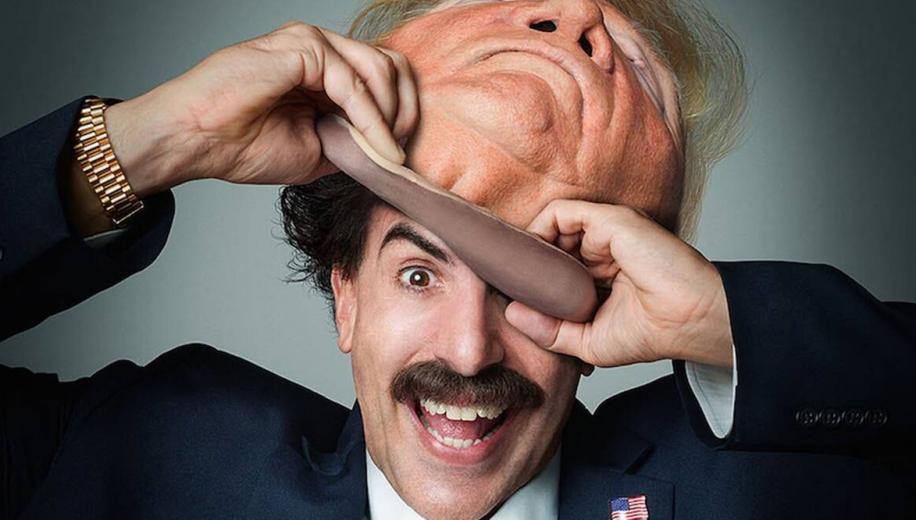 Like some kind of mad demon offspring of Tom Green's Freddy Got Fingered and Chris Morris' Brass Eye, Borat was just one of Sacha Baron Cohen's many colourful personas, making a splash in 2006 as he tore through some surprisingly odd corners of America, making a mockery of just how far people were prepared to accept his faux foreign craziness, blissfully unaware of how ignorant it revealed them to be.

Perhaps there was never a better time for Borat to return than in 2020 on the eve of the election, taking to Trump America with aplomb, and getting into a fair amount of trouble whilst trying to show that there is still a hell of a lot of ignorance out there, and some very dangerous, powerful people too.

After spending years working in a Gulag, Borat is released on a new mission to give a monkey sex gift to the Vice President, getting thrown off track when he realises the monkey has been swapped for his teenage daughter, who he then needs to find a cage for and prepare so she can be gifted to Pence.

Fans of the first Borat movie should expect more of the same. Exactly more of the same. This could be just the extended version, the only major difference being the political background in America, where Borat now finds some very interesting Trump followers, people who will give advice on how to best kill gypsies, some beautifully - and actually heartwarmingly - tolerant old ladies in a synagogue, and a couple of guys in a cabin who seem to wholeheartedly believe Hilary Clinton kills babies and drinks their blood, and that democrats are worse than (and created) Covid. Although played for laughs, there's some serious commentary to all this - these are real people with real votes out there and, at election time, watching a film like this can be quite scary.

At its height, Cohen has some very Chris Morris-level stuff going on

There's plenty of traditional awkward gross-out humour, the dance being the worst offender, whilst the trailers and previews basically gave away that whole pregnancy arc, but - aside from the sociopolitical commentary - Borat's best humour has always been in its blink-and-you'll-miss-them gags, "That's not a woman, that's Dog the Bounty Hunter", which are razor-sharp and arguably transcend normal Borat-humour.

The final act is pretty momentous, attending and singing at a rally which is just utterly jaw-dropping, particularly in the run-up to the election, and then going wild for the Giuliani finale, where they get the man to say some rather surprising things about China and Trump before pulling off their most shocking stunt. At its height, Cohen has some very Chris Morris-level stuff going on here, and whilst it's a hit and miss, intermittently successful vehicle, it's nice to see him leverage the mighty Borat at at time when, clearly, we really need him.