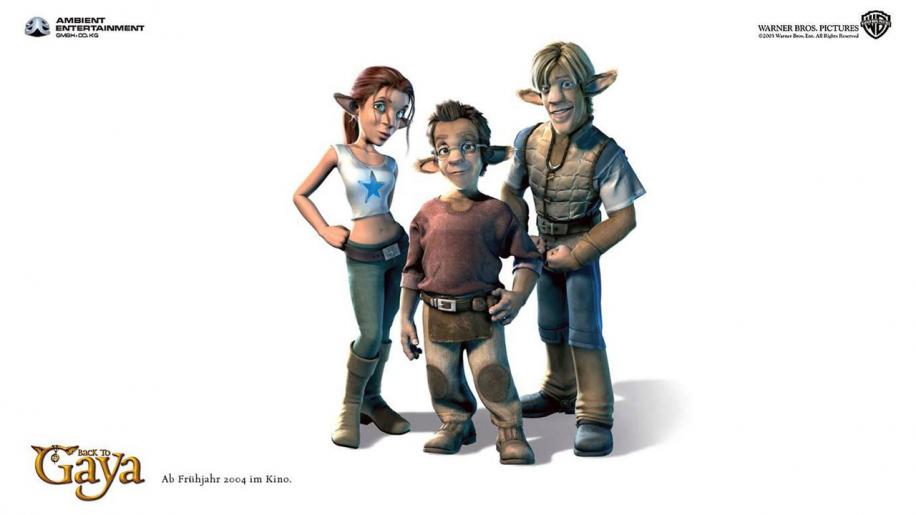 Let me state before I begin, that the review disc I received had “rental copy” stamped on it; and as such I cannot be sure how this will equate to the actual “buy” edition.

Albert Drollinger (Patrick Stewart) has created a phenomenally successful TV show set in the fantasy world of Gaya called Boo, Zino and the Snurks. He is having a little problem with writer's block, when he receives a mysterious phone call. “Do you believe that Gaya is real?” enquires the voice. “Yes” he replies, after a short while thinking, and in doing so kick starts the adventure that follows. The voice belongs to Professor N. Icely, and his dastardly plan to take the power source of the Gayan land called the Dalamite for his own. As he attempts to do so, our hero Zino, his side kick and friend Boo, the Mayor's daughter Alanta (Emily Watson) and three Snurks are transported along with the Dalamite into the 'real world' in a sort of reverse Tron effect. What follows is the thwarting of Icely's plan as our heroes and anti-heroes try to get “Back to Gaya”.

Heavily Touted as Germany's first computer generated feature film Boo Zino and the Snurks should be more properly known as Back To Gaya, that is the original title, and the title it is known everywhere except England. This is quite obvious by the rather abrupt title card that interrupts the opening camera pan; a lovingly crafted scene with a fly by shot of a child's play room up and over the actual title on the back of the child's shirt into the TV screen (this is a TV show after all) and then from nowhere this ugly title appears before returning to some exquisite over land scenes of the Gayan landscape. But I digress. Digitally this is almost a very well crafted film. There is some superb attention to detail, swaying grass, water spray, leaves, hair etc but in some of the close ups the GC degenerates into 'Saturday morning cartoon look'. Additionally the characters in the 'real world' tend to lack weight and position, though their expressions and lighting is phenomenal. Such concerns are noticed within the Gayan world, but are easily forgiven because this is the fantasy element. Sadly, though, no matter how good or bad the animation of a film is, without a decent script there is little to engage an audience. Unlike its Hollywood counterparts, such as Pixar, Dreamworks PCI, or Blue Sky that spend as much time in creating a good script as making the film look good, Ambient Entertainment seem only concerned with making the film look good. In the end, the films attitude of writing is the biggest downfall, there is little intelligence given to the adult viewer, and thus little to get involved in.

The characters are rather thin and ill defined with only the minimal development, even in the 'hero'. There is rarely any sense of peril, and, worse still, sadly lacking in any decent comedy; its attempt at wit all come off flat, and the slapstick elements come off looking daft. Aimed squarely at children Boo Zino and the Snurks was enjoyed by my 6 year old, but anyone over that age my find it a bit of a chore.