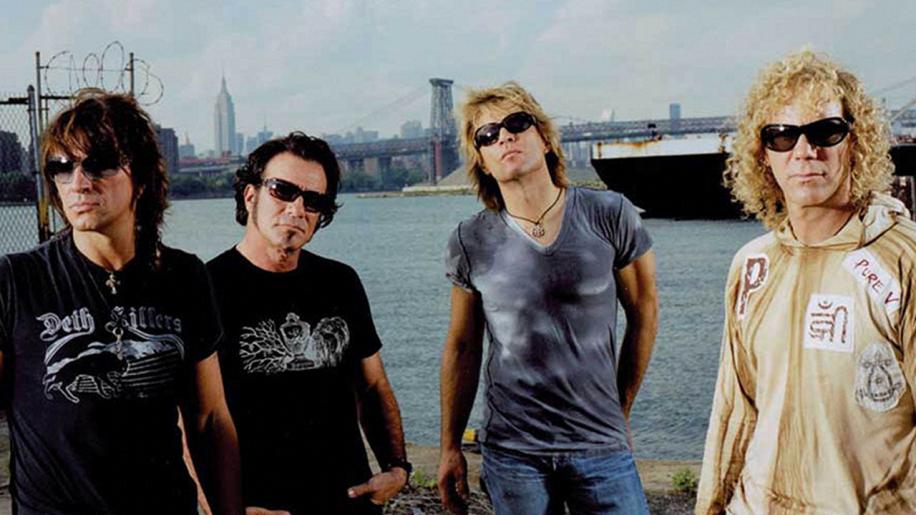 The show was recorded on high definition video and for the most part looks rather good. Colours are solid with next to no bleed, contrast is well handled and blacks look strong and deep. At times the Pal image was so detailed and real looking I felt I could reach out and grab a guitar - or anything else that I fancied! I looked real hard and saw no signs of edge enhancement and few m-peg artefacts - mainly in the lenticular cloud-shaped lampshades! In fact there was little to detract from a very natural looking image apart from a smidgeon of anti-aliasing along the edges of curved objects such as the band's guitars. However - there's almost always a “however” - at times, when the director decides on a long shot, or a different camera angle is chosen the image takes on a softer look and appears much less detailed and old eagle eye here also noticed a rogue horizontal line that cut through drummer Tico Torres' face around the 15:45 mark.

But we're here to watch Bon Jovi and the band members usually fill the screen - and when they do the image is, at times, one of the most natural looking I've ever seen. We're spoiled for choice here with Dolby Digital 5.1 448Kbps, Dolby Digital 2.0 and a DTS track that flags up as 1536Kbps. Each audio format has its strengths - during one song I would prefer the more forward presence of say the symbols in the Dolby Digital 5.1 track whilst in the next song I would prefer the way the DTS mix would allow an acoustic guitar to have a more distinct and less easily-placed sound. There are differences and I'm sure some people will prefer one format whilst others will disagree, preferring its rival. For me, although both the Dolby and DTS tracks have their merits, neither really sets the world on fire. Rear channels have little to do except fill in with drum symbols, a little echo and audience clapping/cheering, whilst vocals are spread across the front three channels. This makes the whole listening experience very front soundstage oriented and at times it felt like I was listening to a 3.1 format.

I did notice a problem with the DTS track, unfortunately; during the first song, Love For Sale, at the 2mins 40secs and 2mins 49secs marks I heard a couple of popping sounds coming from the front left speaker. There was a similar popping from the front right speaker at 43:45 during the cover of Dr. Hook's Sylvia's Mother. There were no popping sounds when I changed to Dolby Digital 5.1. Extra features are spread over both DVDs. Most notable are - on disc one - Everyday, a 30 minute video diary style documentary that goes behind the scenes as the band, roadies and all concerned get things ready for show time. Video and audio is pretty poor here with a scratchy Dolby Digital 2.0 soundtrack and fuzzy picture.

Disc two has a rather nice little feature titled Clip Poker. Here you get to play 5 card Stud Poker with the members of the band - there are a choice of video clips to watch, but to do so you'll have to win a hand! I really liked this and could easily see myself playing cards with the lads for hours at a time. Also of note is a question and answer session with band members as they play Texas Hold 'Em - another card game - and a Director's View segment where the viewer gets to play director by choosing which camera image to use as the band play on stage.

Apart from those mentioned all in all the extras included here are pretty run of the mill, with that interactive poker game being the pick of the bunch for me. At times the picture quality is stunning, and at times it is mediocre. Sound wise I was expecting great things, but felt a little short-changed by a flawed DTS track and a surround sound experience that, despite being clear and detailed, was very front channel oriented. It's interesting to note that when the concert finishes and the credits roll we are treated to the studio version of Lay Your Hands On Me, which sounds distinctly more refined than the live concert version, but perhaps that's to be expected.

As a complete package I can recommend this Limited Edition music DVD offering from a great band - if you want to know what Dr. Hook's Sylvia's Mother sounds like Bon Jovi style buy this, sit back and enjoy. Despite a few flaws, I certainly did.