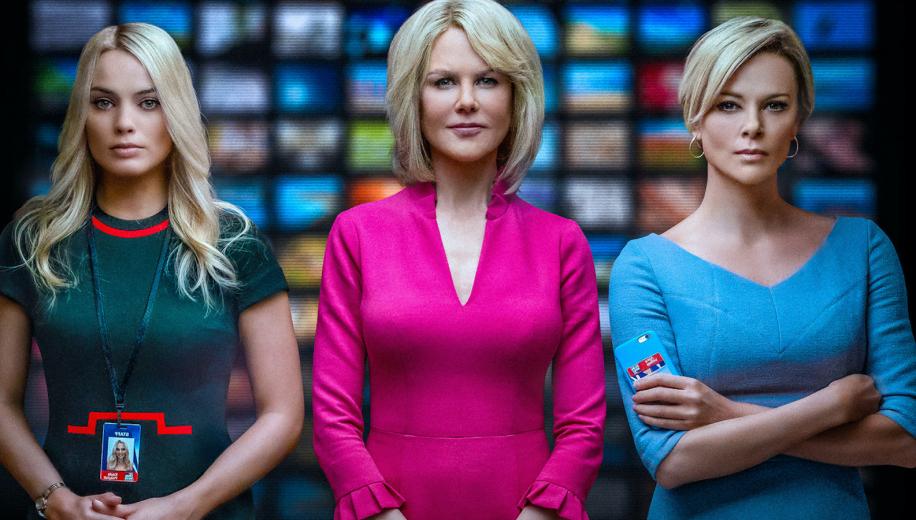 Meet the Fockers' Jay Roach has a film with a whole lot to say, although it doesn't always say it well.

Phrases like “in these PC times”, “unfortunately, in the era of #MeToo” and “snowflakes” have become part of social zeitgeist. You can’t change the channel without being confronted by some middle-aged blowhard lamenting the audacity of victims of sexual harassment, bullying or other abuse for speaking out.

Enter Fox News. In what turned out to be a precursor to the Hollywood-shattering Harvey Weinstein revelations, in 2016 former Fox News anchor Gretchen Carlson sued Roger Ailes, CEO of the network, for sexual harassment. Her accounts were corroborated by over 20 other female employees of Fox, and eventually, network star Megyn Kelly also accused Ailes, after being in a well-documented public spat with one Donald J. Trump. Before long Rupert Murdoch had fired Ailes and Carlson’s case was settled for tens of millions of dollars.

Bombshell focusses most of its attention on Kelly (Charlize Theron), following her as she agonises over whether to come forward and join Carlson (Nicole Kidman) in speaking out. The film also introduces Katya Pospisil (Margot Robbie), who’s a fictional character who serves as a composite of the dozens of other women who joined Carlson in real life. Ailes is played by a plasticky John Lithgow, while Malcolm McDowell shows up to play the hero Murdoch (yes, really).

Having two men write and direct a film about women being sexually harassed is, to say the least, a perplexing choice

The film, directed by Jay Roach of Meet the Fockers fame from a script by Charles Randolph (The Big Short) clearly has a lot to say. It doesn’t always say it well. Having two men write and direct a film about women being sexually harassed is, to say the least, a perplexing choice. Pospisil’s character arc all but disappears into thin air after she’s served her purpose – read: been harassed. Similarly, her desk mate and love interest Jess (Kate McKinnon) who offered a different political perspective, also tails off into insignificance.

Randolph does take pains to avoid falling into any ‘girl power’ or ‘sisterhood’ tropes, instead offering two of the three women a life outside of being abused, with Pospisil’s romance and Kelly’s home life both interwoven into the film. As for the film’s Carlson, once she’s put forward her case and been removed from the air, with a few excellently-acted furious confrontations in between, the film doesn’t seem to know where to put her. The compromise is on an exercise bike, where she answers her mobile with exercise-induced anger.


Theron’s Kelly is ostensibly the main character, and her inner turmoil of whether to come forward and speak out against her employer forms much of the film’s narrative. Theron is powerful, and at times a little stunted, as Kelly. Her performance must surely be mentioned only in the same breath with the work of makeup artist Kazuhiro Tsuji, who spectacularly recreates the real Megyn Kelly’s features.

Outside of the notion that the culture at Fox News was toxic, Bombshell can’t quite seem to make up its mind what it thinks. Indeed, Roach doesn’t really do much with the satirical notes of Randolph’s script and fails to look closely enough at any of the major issues at play. It is gripping though, and there’s a convincing sense of dread and anticipation at play throughout, even though we know what happens in the end. There are some really well-hit plotlines and some powerful scenes, but then there are moments where the script seems to err on the side of caution.

For example, a scene in which Carlson is confronted by a member of the public for her work peddling Fox News propaganda is snuffed out by Kidman mumbling something along the lines of “treat others as you would like to be treated”. Bombshell works quite hard to mitigate any moral ambiguity around the network and its anchors themselves; well-known both now and at the time of the Ailes scandal to be a hard-line, anti-immigrant, homophobic and pro-Trump media corporation, the context of Fox News is sort of whitewashed by the film. Towards the tail-end there are some weak attempts to depoliticise the situation, which needed more exposition earlier in the piece to work; you can’t depict one of the world’s most famously political media organisations at great lengths and then suddenly call for neutrality.

At times it’s as though the filmmakers don’t think just women – of any career or political mindset – getting sexually abused in the workplace is a sympathetic enough story. There are some insightful moments throughout though, and it does do a good job of portraying the permeating and insidious nature of workplace bullying. It’s particularly good at illustrating the ways in which its characters are targeted: for being difficult (Kelly), for being naïve (Pospisil), or for being too old (Carlson). It doesn’t, beyond a few uncomfortable scenes in the office, really delve into any of the deeper underlying issues at play in the Ailes situation: the question of power, rape culture, office whispers, reputations and more.

À la The Big Short, there are a few fourth wall-breaking scenes that serve to educate the audience more thoroughly on some of the political power struggles at play. An explanation of Ailes’s rise to the very top is particularly alarming and affecting. The film’s commentary isn’t flawless and arguably underserves its subject matter by chickening out of engaging with more political questions – this is a film that paints Murdoch as the all-conquering hero, after all. It does investigate a few topical issues and handles lots of the scenes in an insightful way. Buoyed by an all-star cast and dealing with a hot-button topic, Bombshell isn’t exactly an explosive exposé, it has just enough of a spark to have a bit of impact.