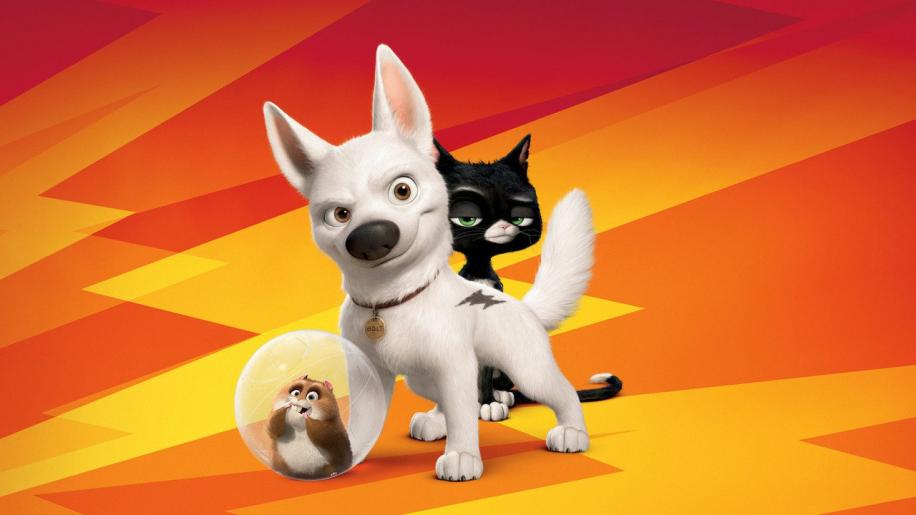 'Bolt' was released in January 2009 and earned the Disney camp a “Best Animated Film” Oscar nomination. It also topped the UK box office and certain theatres featured this movie in 3D. With the plethora of animated movies that have swarmed the silver screen since the emergence of 'Toy Story' in 1995, this movie has some stiff competition. The superb 'Wall E' and the very enjoyable 'Kung-Fu Panda' are standouts from last year. As Disney strongly influenced the scriptwriting process, one can almost tell what's going to happen in this movie by looking at the picture on the BD's casing. But as this movie is aimed squarely at the under tens I won't quibble over the depth of the plot or the quality of the voice acting.

The big draw for the younger generation on this release is the inclusion of pop starlet Miley Sirus (Hannah Montanna) as the voice of Bolt's co-star Penny. In fact, taking into account the target audience, Sirus probably is far and away the biggest name on this release, which I'm sure that John Travolta will be very pleased to hear. Speaking of which, Travolta ('The Punisher', 'Face-Off') provides the voice for the main canine protagonist in this movie. Travolta has a silky smooth voice that really suits the character. Although we're not too sure what age Bolt is, Travolta's voice seems ageless so this is not a problem here. In support are Sussie Essman (the acidic Susie Greene from 'Curb You Enthusiam'), speaking on behalf of Bolt's feline friend Mittens. Mark Walton ('Chicken Little') also stars as Rhino with Malcom McDowell ('A Clockwork Orange') playing the evil Dr. Calico. Randy 'Macho Man' Savage also pops up to voice a thug in the movie!

'Bolt' opens with some cracking action as the eponymous canine hero uses his “super-bark” and “super-speed” to thwart Dr. Calico's attempts to abduct Penny. These sequences are stunning and contain some impressive cinematography that would not be out of place in a big budget action blockbuster. These opening scenes climax as Bolt is snatched away from Penny and locked in his isolated trailer. Now we realise that he has zero superpowers but is merely the star in one of the highest rated TV shows ever produced. However, Bolt believes that he is in fact a super-dog and struts his stuff around his trailer prison. He warns the two cats who torment him that they will feel the wrath of these powers if they don't leave him in peace. Isolated from the outside world by the evil studio executives, in an effort to preserve the performance of their star, Bolt unwittingly resides in the fantasy land of his own production.

In an effort to increase ratings the studio executives stage a cliff hanger where Penny is kidnapped by Dr. Calico. As the shoot ends Bolt is once again locked away in his trailer but still believes that Penny is in danger. Escaping from his prison he falls into a removal van and is transported all the way to New York City, far from his manufactured existence in Hollywood. The race is now on as Bolt makes his way across America in his quest to free Penny from the evil clutches of Dr. Calico. Along the way he meets up with a smart assed, street-wise alley cat called Mittens and a fearless TV addicted, plastic ball dwelling Hamster named Rhino (who is 1/16th wolf and part Wolverine!). Rhino in particular has his moments of hilarity while Mittens acts more to keep Bolt on the straight and narrow and educates him on other powers (such as begging) to make his way in the real world. During his journey to rescue Penny Bolt undergoes his own voyage of self discovery and makes the transition from silver screen super-dog to real life hero. As is to be expected from a Disney production the ending is of course sickly sweet with everyone coming out a winner.

'Bolt' is a non-stop action packed movie that features two main plotlines. The more interesting one involves Bolt, Rhino and Mittens who become friends as they travel across Americana on their way to Tinsel town. There are some amusing moments throughout as Bolt slowly discovers that he does not in fact have super-powers. The pigeons that Bolt encounters and especially Rhino add to the comedy factor. The second storyline revolves around Penny and her guilt over the ruse that she is partaking in to keep Bolt blinkered from his true existence. While this subplot was supposed to be the sentimental part of the presentation, I found it quite boring. The former plotline does feature a lot more predominantly and the annoying agent does add some comedic relief to Penny's plotline. The voice acting is acceptable with the only standout being Sussie Essman who really adds character to the world weary Mittens. My primary complaint with 'Bolt' is that it is seriously lacking in the originally department with many of its core ideas and characters lifted wholesale from other productions. Bolt himself reeks of Buzz Lightyear with realisation slowly dawning that he is in fact not a superhero but a mere mortal. The base concept that Bolt believes he is a superhero because he is trapped in a false existence engineered by evil studio executives' mirrors proceedings in 'The Truman Show'. Even the pigeons that feature are very similar to the 'Goodfeathers' from Warner's 'Animaniacs' cartoons. I know that if you look deep enough into any production that you will find similarities to previous releases but I found the above comparisons glaringly obvious. Children will undoubtedly lap up the content of this movie so this is probably a moot point.

So with the kids taken care of what's in it for us adults aside from ninety minutes of peace and quiet? With the absence of double entendres or other “adult” sneaky humour, 'Bolt' doesn't contain a whole lot in the way of adult orientated entertainment (and I don't mean pornography!). In saying that the plot is strong and the action rarely lets up for a minute with Bolt rushing from one side of the country to the other in an effort to rescue Penny. There are obvious references to the evil and deceptive nature of Hollywood and an underlying message of “Be happy with the simple things in life”. I'm not too sure if the target audience will understand these morals and all adults know these facts already (even if they choose to ignore them!). Overall this is an enjoyable movie that offers no novel twists to the animation genre but will at least keep the kids entertained for a couple of hours and it looks (and sounds) very, very impressive.