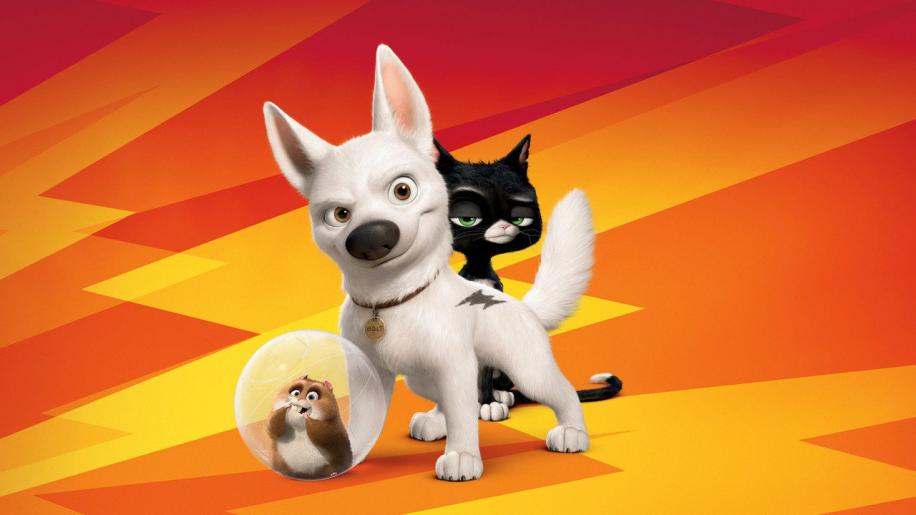 The back catalogue of 3D titles continues to arrive unabated on Blu-ray with Bolt, Disney’s first foray into the technology rather than converting ‘after the fact’. Once again, this is a title that has been out on Blu-ray for a few months and already reviewed on site, so I’ll only make a few observations on the synopsis before moving onto the more pertinent 3D elements.

There was a time when the release of a Disney title was an event, each successive title seemed to build on the last, but it seems, with the advent of CG animated films in the wake of Pixar’s seminal 1995 release Toy Story, there is an oversaturation of this animation all vying for ‘classic’ status, or, more importantly for the studios, profit. Disney, then, with all of their corporate might still want to be seen as the pinnacle of child friendly films when clearly their crown has fallen. Bolt was not a film made to try and reclaim their status, but you can see within the story, all the elements that make up their tradition, but, to me, it is trying too hard and in doing so loses that ‘magic’ that makes Disney so special.

First time directors Chris Williams and Byron Howard, together with CG animation God and Pixar founder, John Lasseter, tell the story of Bolt (voiced by John Travolta) a young puppy imbued with super powers as he protects Penny (voiced by Miley Cyrus) as she tries to save her father from the evil Dr. Calico (voiced by Malcolm McDowell). Sound like the plot of a TV show? Well, that’s because it is; only Bolt, the star, does not know it. The show’s producers keep the dog trapped in this fantasy world to make his performances all the more believable, but when a cliff hanger ending sees Penny kidnapped, Bolt escapes his trailer sure in the belief he is on a rescue mission, and through a series of events gets shipped across America whereupon he has to find his way back, discovering the reality about himself, and making new friends and along the way. The story itself is clearly then, not that original, and is made up of elements that are themselves, not that original and when you consider the film is aiming for a younger audience, you are left with a film that doesn’t quite hit the mark.

The biggest problem is that throughout the film you are constantly reminded that you’ve seen this before – not exactly, but so many elements – Bolt, himself, a normal dog under the illusion he has super powers comes to realise he doesn’t, Buzz Lightyear much? The friendship that develops between Bolt and Mittens, every buddy film ever made much? Revelation of Mittens’ behaviour, Jessy (Toy Story 2) much? A dog and cat travelling across the America goes as far back as The Incredible Journey (1963)! I could go on, but you get the general idea. Add to this the films constant attempts to tug at your heart strings to invoke empathy and involvement with the characters – aforementioned Mittens’ revelation, Bolt and Mittens’ split, then reconciliation, Penny’s pining for Bolt and their final reconciliation are the larger examples, but the film is littered with them. Like I say, it’s trying too hard to convince you that these characters are worth caring about – it's like you have a teacher standing over you saying "You will care, and you will shed a tear at this situation". Sadly, too much is too much and it ended up taking me out of the film. Honestly, the greatest thrill, emotionally, I felt was with the beginning chase scene, “You’re my good boy,” is as emotionally charged as the finally Super Bark that Bolt performs curling up to Penny in the final scene. Actually, I’d love to have seen the film version of the TV show portrayed, that had more depth, emotion and action than anything the ‘real world’ had to offer.

Of course, this is my adult mind talking, and I guess with the bar set so high by the likes of Pixar, I just expect more from my CG animation and not a simple re-hash of all that has gone before. Bolt’s box office takings seem to reflect this as well. It’s not a bad film, and had it been releases ten years ago this might have been a reference point, but as it is, it remains a watchable but ultimately forgettable addition.