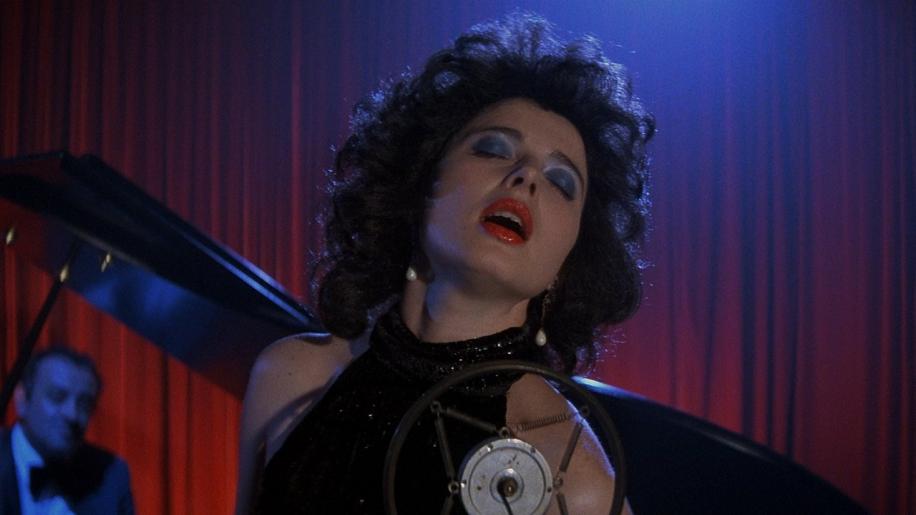 David Lynch has always been renowned for his dark, offbeat and somewhat surreal style of filmmaking. His fairly adventurous, undeniably unique works have generally been more favourably received on the Continent than in the UK and the US, and his own feelings towards the seemingly unstoppable Hollywood machine have always been well publicised. Indeed arguably the closest Lynch has ventured towards outright mainstream cinema was with his floptastic adaptation of lauded author Frank Herbert’s Dune, a film which some might also consider is his most flawed – and both before, and since, he has largely eschewed mainstream productions in favour of smaller, more personal efforts, all of which (excepting the very literal Straight Story) proudly bear all of the distinctive trademarks of his inimitable style.

From the compelling “horror” of Eraserhead to the wide-eyed frenzy of Wild at Heart; from his almost-impossible-to-coherently-explain Lost Highway, to his just-about-possible-to-coherently-explain Mulholland Drive, his productions all exhibit the trademark elements of his stylish flourishes: the surreal flash imagery; the brooding, oppressive undertone; everything that simply defines the word Lynchian. Although I enjoyed Lost Highway, it’s perhaps Mullholland Drive, itself a stark and personal slight against Hollywood, that is, in my opinion, his finest and most refined work.

One of his most famous and most popular efforts is 1986's Blue Velvet, something of a dark anti-film noir which tells an otherwise fairly standard detective tale in just about the least standard way you could imagine.

His hero is a fairly flawed, sometimes ineffectual amateur with his own somewhat perverted voyeuristic obsessions; his femme fatale is a masochistic, damaged victim, busy brewing her own particular brand of madness; and his villain is a completely unhinged psychopath of epic proportions – a veritably and unfathomably evil monster.

In fact, as is often the case with Lynch films, the characters appear to exist in their own alternate universe, which mirrors the real world in almost every respect, but has a dream-like quality around the edges – most prominently showcased by the slight character affectations, surreal moments and stark imagery that tints his vision. Like a series of dark and twisted fairytales, Lynch films are almost incomparable to any others and, despite it being arguable the most straightforward of all of his works (barring the aforementioned Straight Story), Blue Velvet also remains one of the most fantastical outings in this respect.

“I had a dream. In the dream, there was our world and the world was dark because there weren't any robins, and the robins represented love. And for the longest time, there was just this darkness. And all of a sudden, thousands of robins were set free, and they flew down and brought this blinding light of love. And it seemed like that love would be the only thing that would make any difference. And it did. So I guess it means there is trouble 'til the robins come.”

The story unfolds with an almost dreamlike prelude that soon reveals its nightmarish undertones. The song ‘Blue Velvet’ plays out warmly in the background, lulling us with a false sense of security: we see a friendly neighbourhood; the sun is shining, the leaves are green and the flowers are in bloom; there’s even a fire engine that rolls past in slow-motion with the firemen waving joyfully towards the camera. This looks like a nice place to live. A man is watering his lawn; the pressure in the hose is building and water is leaking from the connection at the faucet. Suddenly the man grabs his neck in pain and collapses on the floor, water from the hose spraying everywhere as he writhes around on the ground, in the wed mud, a dog lapping at the water and barking chirpily. The camera soon shifts focus to the blades of grass on the lawn, a fresh, vivid green in colour, and then it drifts down beneath the surface to the earth underneath where we behold beetles and other insects snapping at one another furiously in the ground, the noise from their crawling and wriggling now dominating the soundtrack in an oppressive fashion.

Within these few minutes Lynch establishes exactly what you can expect from this masterful work: he’s going to take the nice, clean society that we all live in and tear it all up to look at the dirty, rotten roots beneath the surface.

We soon meet Jeffrey, a young man who is still at college and who has to come home because his father has just collapsed with some kind of brain clot. He’s a well-presented, well-spoken lad who finds himself out in the cold with no friends left in the area and nobody around except his overly intrusive mother and slightly dotty aunt. One day, while he’s walking around the neighbourhood he discovers a human ear and immediately takes it to one of the local town sheriffs who instigates an investigation. Despite being told to keep clear of the case, Jeffrey finds himself drawn to the whole mystery of it, looking for clues and solving puzzles; he discovers a beautiful nightclub singer with a dark secret, and decides to hide in her apartment to see if he can find out any more. What he sees is a whole lot more than he could have ever expected, even in his wildest nightmares.

“You found something which is very interesting to us. Very interesting. I know you must be curious to know more. But I'm afraid I'm gonna have to ask you now not only not to tell anyone about your find but also not to ask more about the case. One day, when it's all sewed up, I'll let you know all the details. Right now, though, I can't.”

Although the main character in story is played by a young Kyle Maclachlan (Dune, Showgirls), he is not quite the star of the show. He does, however, get to test his mettle in what feels like the prototype mould for his later Lynch work on Twin Peaks, playing the hapless, driven, voyeuristic, arguably perverted Jeffrey, who is not a conventional anti-hero, but is also far from what we may call a hero, despite that being his position in the movie.

He is ably supported by a number of other notable actors and actresses, who are all also Lynch regulars: a young Laura Dern (Jurassic Park, Wild at Heart), as the police detective’s daughter who David becomes increasingly involved with; George Dickinson as the detective; Dean Stockwell (a long way from Quantum Leap) in a deliciously camp cameo, and Ingrid Bergman’s daughter, Isabella Rossellini (Wild at Heart, Wyatt Earp), as the disconcertingly volatile yet strangely alluring femme fatale at the heart of it all.

They are all superb in their roles although it should be noted that this does not necessarily mean that their performances seem good: the majority of the characters are played in a skewed, slightly off-kilter fashion – on purpose. In particular Maclachlan’s Jeffrey often comes across as desperately earnest and Dern’s partner-in-crime drifts between usefulness and capriciousness on a whim, the dialogue between them often being truly bad. Yet you get the feeling that this is perfectly in-line with what Lynch wanted: adding to the dream-like quality of the film, as if this is not real life, it’s some weird alternate universe where people behave like this.

Of course the real star of the show has got to be the late, sometimes great, Dennis Hopper (Apocalypse Now, True Romance). Never more scary than he was here in the role of the psychotic Frank, an evil criminal who enjoys others’ pain, not least in sexual terms, and who commands your every look, your every gesture, with a cocked fist at the ready to pull you back into line if you ever step out of it, Hopper since went on the make his name playing increasingly caricature villains (he was good in Speed, but comical in Waterworld) and never managed to even come close to the power of his performance here. Horrified by his every word (indeed he barely utters a line without swearing) and every action, his snorts, his snapping anger, his brutality and depravity, you are simply mesmerised by his performance – almost paralysed by his actions, so scary they are.

“Don't be a good neighbour to her. I'll send you a love letter straight from my heart, f**ker. Do you know what a love letter is? It's a bullet from a f**kin' gun, fucker. If you receive a love letter from me, you are f**ked forever.”

Unlike the majority of his movies, Blue Velvet largely steers clear of a common Lynchian element: blending outright dreams with reality. From Mulholland Drive to Lost Highway it’s almost impossible to fully comprehend his narratives – in the former you can just about solve the puzzle over what’s a dream and what’s reality; in the latter it’s pretty-much beyond straightforward coherence. With Blue Velvet, instead, he tells a remarkably regular mystery tale, only peppering it with desperately extreme behaviour from the majority of his ostensibly ‘normal’ characters, and imbuing it with his trademark surreal texture, like you’re watching some kind of nightmarish dream (or, arguably, a dream-like nightmare). Yet beneath this facade, it’s just a regular detective story – unquestionably made more rich and decadent by his stunning stylisation, but a regular detective story nonetheless.

Don’t mistake this for a criticism, after all plenty of relatively straightforward detective stories out there take on an entirely different shape thanks to masterful stylisation and as a result of being steeped in a moody atmosphere: look at Polanski’s tour de force Chinatown. No, Blue Velvet is far from harmed by Lynch’s straightforward storytelling, and arguably made more pleasurable because of it – certainly more accessible – as you can simply enjoy the rich textures, offbeat characterisations, atypical behaviour, shock events, in-your-face symbolism and occasionally mad moments (like when characters simply disappear off the screen) without having to bother yourself about whether or not any of it will make any sense by the end of it. You can sit back and watch Dennis Hopper’s almost impossibly nasty villain slap, beat, slash, sexually assault and shoot his way through the proceedings as the frustratingly tame protagonist sits back and voyeuristically watches events unfold (he’s our portal into this weird world after all). And by the end of it all, you’ll likely be at once in awe of, and also more than a little disturbed by, the mind that created it all.

Welcome to the mind of David Lynch.

“I don't know if you're a detective or a pervert.”