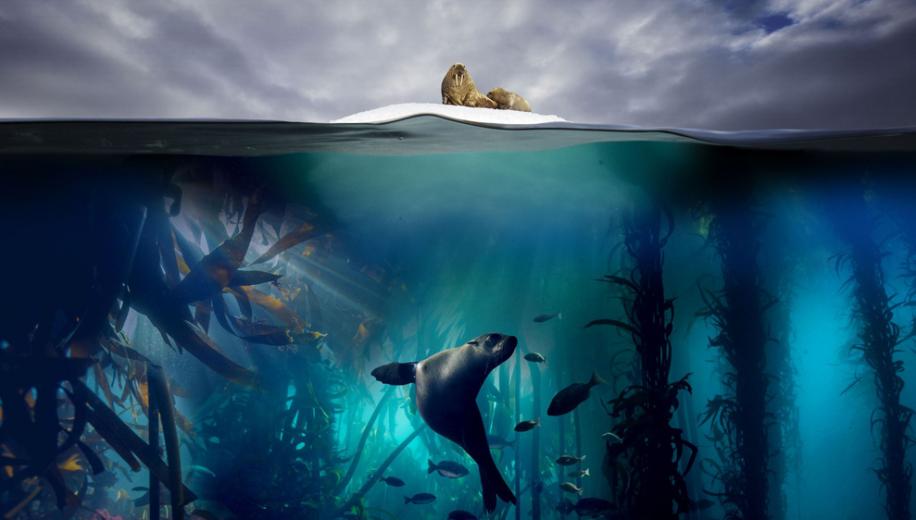 If you've ever wondered whether the BBC is worth the cost of the licence fee, then Blue Planet II makes for a pretty good starting point.

This latest series from the corporation's Natural History unit is another example of the kind of documentary filmmaking that they do so well. Just like 2016's Planet Earth II, the BBC has spent years and utilised all the latest technology to deliver a documentary that reveals the incredible diversity of life in the ocean's of our planet. The series manages the same incredible feat as Planet Earth II, not only delivering some of the most incredible and breathtaking photography that you've ever seen but also revealing creatures and behaviours that you couldn't possibly imagine in your wildest dreams.
So in the first episode alone we get dolphins surfing for sheer pleasure, a fish that changes sex and another that uses tools. Later on there's the sight of giant whales just hanging vertically in the water as they dream, a beautiful and strangely eerie image. There's the bizarre creatures that lurk in the depths, the staggeringly colourful inhabitants of the Great Barrier Reef and a deadly game of cat-and-mouse between a shark and an octopus that uses shells as a camouflage. Blue Planet II is an absolute triumph, reminding us that our world is more beautiful and stranger than we ever thought possible. Blue Planet II was filmed digitally using various 4K cameras and was finished using a 4K Digital Intermediate (DI), which presumably formed the basis for this Ultra HD Blu-ray release. The series is presented at a resolution of 3840 x 2160p and in its correct 1.78:1 aspect ratio, the discs use 10-bit video depth, a Wider Colour Gamut (WCG) and High Dynamic Range (HDR), and are encoded using the HEVC (H.265) codec. We reviewed Blue Planet II using the Oppo UDP-203 Ultra HD Blu-ray player and an LG 55B7 OLED TV.

Recent BBC wildlife documentary series have been used as a test bed for the burgeoning technologies that are revolutionising the way we watch TV. Planet Earth II was the first flagship series to show the full potential of increased resolution, higher dynamic range and wider colour gamuts, all of which were showcased to great effect on the 4K Ultra HD Blu-ray release. Blue Planet II is the next title to get the HDR treatment and the series has already been used by the BBC to demonstrate Hybrid Log-Gamma (HLG) on the iPlayer.


Staggering 4K HDR images, each more colourful and jaw-dropping than the last

Blue Planet II looked incredible when broadcast in Full HD and even more impressive in HLG on the iPlayer but the 4K Ultra HD Blu-ray takes things to another level. The level of detail in the 4K photography is often stunning with close-ups of dolphins revealing every tiny mark and scar in staggering detail and every hair visible on the face of a walrus. The vast coral reefs are just bursting with the tiniest of details that make full use of the additional pixels and this fascinating underwater world is delivered with incredible reality.

This is made all the more realistic thanks to the use of high dynamic range (HDR), with shafts of sunlight illuminating various underwater creatures in such a striking manner that they almost look like effects shots. The use of the higher dynamic range to deliver the sunlight reflecting off waves or the details in the darkness of the abyssal depths is equally as impressive and many of the shots captured are simply breathtaking. The storm clouds contain more detail in the peak highlights, lightning bursts out from the darkness and ice flows reveal a wonderful level of intricate detail in all that white.

However where this disc really delivers is in terms of the wider colour gamut available to Ultra HD Blu-ray, with the aquatic world revealed in a way to which only those with experience of tropical diving can relate. Once again the coral reefs are a riot of colour, whilst the ability of a cuttlefish to literally change colour before your eyes is mesmerising. The entire series is one of the most striking uses of colour as a visual tool that we have ever seen and it is often hard to believe that such primary colours exist in nature.

On thing that was apparent during the series' original broadcast and also on iPlayer was banding but there is no evidence of this on the 10-bit disc, with the numerous underwater shots free of any such artefacts. In fact if you're looking for a new disc to show off the full potential of your TV in terms of resolution, dynamic range and colour gamut, then Blue Planet II should be at the top of your list. Blue Planet II uses a DTS-HD Master Audio 5.1-channel soundtrack and whilst we could bemoan the absence of an object-based Dolby Atmos or DTS:X mix, the reality is that the provided soundtrack is superb. Although the lack of any overhead channels does mean that the soundtrack can't quite immerse you in its watery environments, the audio designers still do a marvellous job of capturing and replicating the aquatic world shown on screen.

David Attenborough's narration is clear and centrally focused, just as it should be, and is nicely balanced within the overall mix. The use of music is highly effective, with some big orchestration that accompanies the more epic visuals, whilst the more comedic moments are just as effectively scored by music that is more whimsical. The effects channels are used very effectively as well, with plenty of sounds emanating from the surround channels and noises steered expertly around the 360 degree sound field.

The very nature of the underwater environments on show means that there is plenty of opportunity for surround effects and this results in some highly active surround channels that are very immersive in nature. The bass performance was also impressive, with low frequency energy used to under-score certain scenes such as waves crashing against the shore in a particular storm sequence. The low-end kick is very impressive but the bass channel is also used to give certain scenes greater presence and again this proves very effective. Overall this is an excellent soundtrack that is demo quality from beginning to end.

The Ultra HD Blu-ray release of Blue Planet II includes the seven episodes of the series spread across three discs – One Ocean, The Deep, Coral Reefs, Big Blue, Green Seas, Coasts and Our Blue Planet. It also includes the series in Full HD spread across three regular Blu-rays. These Blu-rays include the 'Blue Planet II Diaries', which are also presented in Full HD and are at the end of each relevant episode, rather than being accessed separately. Each of these seven short 10 minute featurettes was included after the broadcast of the episode they relate to, in order to pad the running time up to an hour and this is replicated on the Full HD Blu-ray discs.

The Diaries themselves cover how a certain sequence was captured in the episode it relates to and they really show the incredible lengths to which the filmmakers go in order to make the series. In one example the filmmakers are trying to capture a specific breeding habit that only occurs once a year. Sadly they miss the specific event they were trying to film, meaning that they have to come back the following year – which gives you an idea of the level of patience required. You also get an idea of how remote and harsh some of the environments were and the level of commitment required to film underwater for prolonged periods of time whilst exposed to dangerous animals. Blue Planet II is another superb documentary series from the BBC and, over the course of seven episodes, it gives the viewer unprecedented access to the strange and wonderful world that exists in the oceans of our decidedly blue planet. The series consistently amazes with its breathtaking photography, whilst also constantly surprising with some of the bizarre behaviour exhibited by various marine animals. Blue Planet II is a powerful reminder of the kind of quality natural history series that the BBC makes so well, documentaries that push the technological boundaries, take years to produce and are exciting, entertaining and educational.

Thanks to the cutting-edge technology involved in the creation of Blue Planet II, this resulting 4K Ultra HD Blu-ray release is state of the art. So you get a native 4K disc that utilises every pixel at its disposal to produce breathtaking images, along with HDR and WCG to deliver a dynamic range and colour gamut that is often jaw-dropping. The accompanying DTS-HD Master Audio 5.1 soundtrack might not offer object-based audio but it's still a demo quality mix that perfectly compliments the stunning visuals. There are the usual Blue Planet II Diaries that show the struggles involved in actually making the series and round out what is yet another must-have release from the BBC.