High on quality, high on price 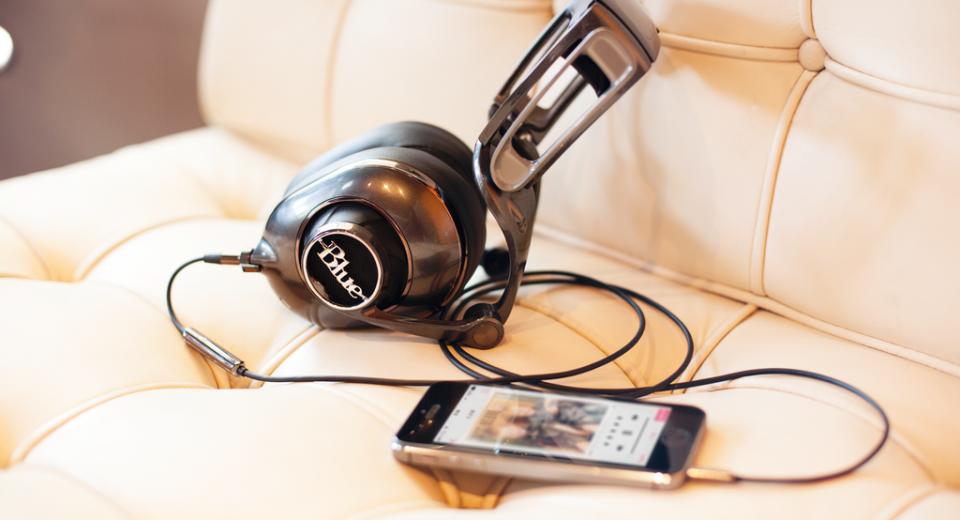 What is the Blue Mo-Fi?

Even if your interest in YouTube and the world of streaming videogame content is sporadic at best, you’ll likely have unwittingly seen the vast majority of Blue’s products already.

The Californian company’s “Yeti” and “Snowball” retro-styled microphones are the stuff of legend amongst amateur Twitch streamers and podcast enthusiasts, so it comes as no surprise that Blue’s first foray into the headphone market is now being targeted at console and PC owners, following a soft launch to the audiophile crowd last August.

The Mo-Fis are premium stereo headphones with a high-end £275 price point to match, featuring 50mm titanium-reinforced and power-hungry drivers housed in a distinctive metallic and soft leatherette chassis that doesn’t look far out of place with the rest of their product lineup. The reason for that high price point lies beyond the cost of materials however, because the Mo-Fis also offer the somewhat unique proposition of their own built-in and rechargeable “audiophile grade” analogue amplifier that promises to take the strain off low-powered mobile devices and deliver superior audio from any weak 3.5mm output.

In a world in which many of us are regularly using game controllers, smartphones or tablets to power a set of earbuds and consume hours of gaming, audio and video, the Mo-Fi’s remit of “mobile fidelity” makes a whole lot of sense.

Take a good look at the pictures that pepper this review, and you’ll likely know immediately whether the Blue Mo-Fi is for you. These are headphones strongly identifiable as a retro-styled Blue Microphones product, and it’s built with the same eye for premium materials and a heavy-duty feel.

The first thing that strikes you when you open the box is the sheer size of these things. No matter what way you cut it, this is a gigantic pair of headphones, weighing in at a head-turning 466g of metal, leather and brushed-grey plastic. Their overall design is apparently racecar-inspired in origin, although the subtly-lit Blue logo and industrial-looking multi-jointed arms suggest more of an old-time radio studio to my untrained eyes. For my tastes, I think they look superb; although response from those nearest and dearest has been suitably Marmite-tinged. Picking over the specifics, the Mo-Fi’s design is relatively unique. The huge earcups are actually ear-shaped rather than the usual round design, housing those massive 50mm fibre-reinforced drivers beneath a semi-sealed soft-leatherette cushion filled with acoustic-dampening material. The cushioning is deep too, with the idea of providing a relatively private and sealed listening experience with a bit of room between the speaker grille and your ear.

Looking upwards, the multi-jointed headband is also solidly designed. Each of the earcups can be rotated to provide a precise fit for your own head shape, while the arms that connect them to the headband are hugely positional, meaning the overall height of the Mo-Fis can be measured precisely to fit. Keeping them all in place is an adjustable tension dial located to the rear and top of the headphones, with the idea that pressure can be equalised throughout the frame - and thus your head - according to your own taste. Elsewhere, the Mo-Fi’s built-in amplifier controls are housed in the left earcup, with a mini-USB charging socket located toward the bottom, along with a switch that allows for amplification to be switched off, on, or engaged with a subtle bass boost mode. The switch itself is satisfyingly tactile and clacky, and also forms the housing for an audio port that takes any of a selection of audio cables provided in the package (all 3.5mm, in the form of a 1.2m with iPhone controls and 3m without, along with a 6.35mm adaptor). The Mo-Fi’s audio connector is recessed far back enough that it’ll likely be a difficult job to get replacements for those cables however, as each one comes with an elongated metal termination that just about squeezes into the available space.

All those audio features would count for nothing if the Mo-Fis were too uncomfortable to use for extended sessions, and though Blue has evidently put a lot of thought into spreading that 466g of weight around your head, it’s difficult not to see this as an over-engineered product at times, and almost too configurable for its own good.

Given the points of articulation, the Mo-Fis take a while to customise to your exact head shape, and even then, those minute adjustments have to be reproduced practically every time you put them on. It’s a process that quickly becomes second nature, but even with the tension dial correctly configured and everything snuggly fitted, it’s impossible not to notice the sheer weight of these things after a couple of hours’ use. The combination of weight and a tight seal leads to an undeniably hot and heavy sensation around the ears after a while, and unfortunately the left earcup cushioning on our model was actually prone to slight collapse at the bottom, leaving the speaker grille resting a little too close to the lobe.

Also more than strange is the complete omission of a microphone, despite Blue's heritage. Given the press release that accompanied the Mo-Fis specifically targeted the gaming market, that's a huge loss in functionality. So although it’d be a stretch to call the design of these things “portable”, Blue has still evidently poured a lot of thought into other commuter-friendly aspects of design. The audio seal generating all that warmth is at least excellent for anybody that needs to listen in privacy, while the amplifier is capable of fully charging within a couple of hours and will happily power the headphones for around 10-12 hours before demanding more juice or a switch to passive mode. You needn't worry about managing the on/off switch in day-to-day use either, as simply closing the headphones automatically turns it off, which is a lovely touch.

However, you do have to be extremely careful about the device you connect it to. These things can get ridiculously loud with amplification switched on, so if your phone, tablet or controller is already turned to maximum volume, be prepared to have your ears ringing for an hour or two afterwards. Removing or connecting the audio jack when the Mo-Fis are in powered mode can also result in an uncomfortable high-pitched popping sound, so it pays to get into the habit of wearing them around your neck, then slowly raising them to your ears when you’re sure everything in the chain is connected and at a low volume setting.

To be fair, the manual does extensively warn against connecting anything when the headphones are switched on, but it's all too easy to forget.

Unfortunately, although a premium-feeling travel bag is included, the Mo-Fi's multi-jointed arms never really collapse to any great degree, making for some of the most bulky “portable” headphones you’ll ever see. Realistically, this is a device that's only suitable for use at home, or alternatively for people that regularly carry a large bag or can slip them into a suitcase for long-distance travel.

How does it sound?

Given the Mo-Fis are marketed to us as “perfectly formed for gaming”, it makes sense that’s where we’ll start. Both PlayStation 4 and the Xbox One are capable of carrying audio via Bluetooth and output through standard 3.5mm sockets on the base of the controller (Xbox One requiring a separate adaptor to do so), and in theory, this sort of situation is exactly where they should shine.

And boy, do they ever. In non-amplified mode the Mo-Fis produce clear, precise and well-balanced audio that’s perhaps a touch on the quiet side and leans towards the mid and high ranges, but with the analogue amplifier engaged (and volume lowered on the source), they spring to life. The Mo-Fis are capable of unearthing a layer of detail, clarity and presence that numerous passive headsets have failed to deliver, and as the pricetag should indicate, this is a huge step up from the type of kit you might traditionally attach to your console or smartphone.

After putting well over 80 hours into Destiny I was surprised to hear so many subtle changes to the audio when bouncing around the moon and Mars, with hitherto unheard combat effects neatly placed in a wide soundstage and echoing off into the distance. Switching to the Xbox One and Forza Horizon 2 again left a hugely positive impression, with the hefty roar of each vehicle reproduced beautifully from in-car view and cars easily placed as they flew past on either side. Although the Mo-Fis don’t attempt to offer positional audio of any kind, it’s not really missed (for singleplayer games, at least) when stereo is delivered with such precision. On a side note, the amplifier unfortunately also boosted a low level of static and hiss from the Xbox One headset adaptor, and that was more than a little distracting during quieter moments. After testing with an iPad, Samsung tablet, PlayStation Vita, PC, a Sony Z1 and a Sony Z3 to be sure, it was indeed only the Microsoft device that produced such interference, although the lesson is there; imperfections in badly-designed audio sources can be picked up and magnified by these things to a distracting degree. Switching to passive mode cured the problem, but it’s hard to go back from the other modes.

Switching the amplifier to their final “On+” mode and delving into some music, it was a pleasure to discover a subtle bass boost that only served to enhance the audio mix rather than provide the sort of boomy, blown-out experience found on cheaper headsets.

This seems to be a selective process, for example adding a layer of warmth to older Bob Dylan tracks and parts of Faith no More’s new single “Mother****er”, while bass-heavy dance music from the likes of David Guetta sounded pretty much the same in either amplification mode. Predictably, high-quality rips of acoustic and classical music also sounded jaw-droppingly beautiful at times through the Mo-Fis, benefitting from the wide soundstage and clarity throughout their range, even without any of the built-in amplification. Movies too, were suitably pleasurable, with the subtle bass enhancement coming into its own during action scenes, but never threatening to swallow dialogue or drown out lighter effects.

While Blue’s heritage is firmly entrenched in the microphone business, you have to take your hat off to a company that's willing to try something new and innovate within a different marketplace. The Mo-Fi takes the concept of a portable amplifier and high quality drivers, fusing them both into a ridiculously attractive set of headphones that ooze style, and thankfully, audible substance.

And unfortunately, like so many first-generation attempts at niche products like this, the Mo-Fi could also benefit from a few generations of refinement before it reaches its full potential. The pieces are there for Blue to have something genuinely special on their hands, but the overly-heavy chassis and lack of portability unfortunately run against their remit for "Mobile Fidelity".

If you've got money to burn and an appetite for getting the best out of your videogame, tablet, PC or phone audio, then the Mo-Fi is still absolutely worth a look. Be prepared for a sore neck, but at the very least it'll be supporting a grin that stretches from ear to ear.