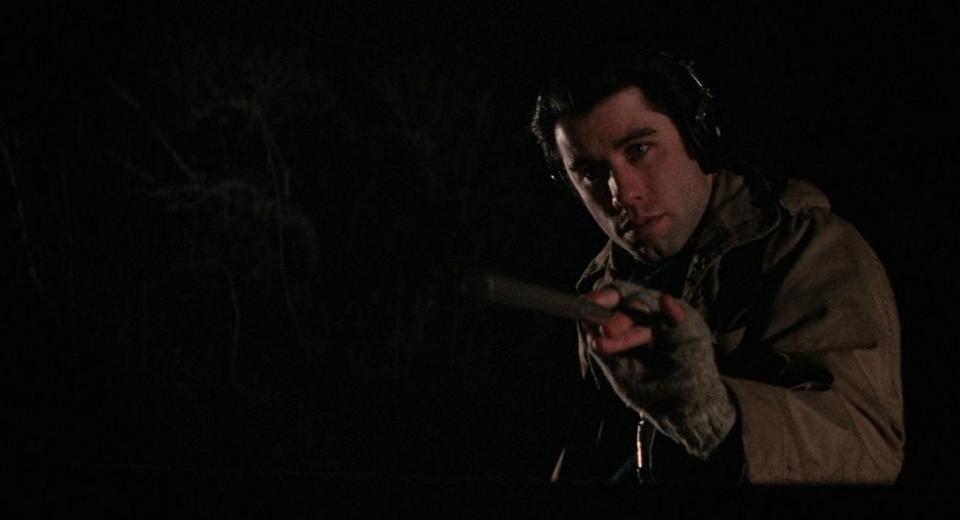 Blow Out comes to Region B-locked UK Blu-ray with a video presentation that basically looks identical to 2011’s Region A-locked US Criterion release, undoubtedly spawning from the same master that was restored for that release under the supervision (and not just approval) of director Brian De Palma. Presented with a 1080p/AVC encode in the movie’s original theatrical aspect ratio of 2.4:1 widescreen, detail is certainly impressive, with clarity resounding throughout and no obvious signs of intrusive or excessive digital tinkering – whether edge enhancement or DNR. The video sports a healthy layer of suitably filmic grain which remains visible across the production, but neither grain nor noise are oppressive at any stage. Some sequences are certainly softer than others, but this seems largely intentional / inherent to the original production, and these brief moments never impinge upon your viewing pleasure. The colour palette is authentically rendered with deep, rich and vibrant tones, right up to and including the black levels which are strong and also allow for excellent shadow detail. Matching up to the impressive Criterion video presentation, Arrow have certainly done a commendable job for this UK equivalent.

Opting to stick to just English LPCM 2.0, the Arrow release also follows suit on the aural front, which is a bit of a missed trick as they could have allowed us the option to chose a remixed 5.1 HD track as an alternative. Of course Arrow’s track history for remastered 5.1 HD tracks is not great (c.f. King of New York) so perhaps just sticking with the original 2-channel audio was a wise decision after all.

It’s certainly a decent offering, perhaps even one of the best 2-channel tracks I’ve ever come across, offering up an inherently front-based aural presentation of the material, which is undoubtedly dominated by the penetrating score. As mentioned in the body of the main review, the score is a little dated, but it does still largely suit the material and the presentation here certainly benefits your movie experience. Dialogue is clear and coherent throughout, again coming distinctly from across the frontal array, and effects are innumerable, and well-observed, despite the lack of dynamics and significant surround activity. The LFE channel further gets involved in the action, whether it be enhancing the percussive elements of the score or the louder effects shock noises. Overall this is a solid and largely impressive video presentation.

Although the US Criterion release was absolutely jam-packed with excellent extra features, this UK counterpart sports none of them. Rather than buy the rights to Criterion’s extra features, they’ve instead chosen to buy the ones from the French Blu-ray release. Who knows, perhaps Criterion refuse outright to sell licenses to any of their extra material whatsoever? Ah well, at least Arrow have gone out of their way to make up for this fact by providing a whole host of newly-recorded interviews which provide an extras package which is almost as good as the Criterion set, and which will surely frustrate fans of the film who will now feel obliged to own both copies of the film, even though the video and audio is identical across them.

Black and White in Colour

This 27 minute interview is a revealing little retrospective by cinematographer Vilmos Zsigmond who talks lovingly about his work on the film, fondly remembering details and regaling anecdotal information about the production as we see the relevant scenes play out (and beautiful black and white stills taken on-set) to remind us as to what he is referring to. After over thirty years, this guy’s got a great memory, and it is well worth hearing what he has to offer.

Although this 21-minute interview piece with Nancy Allen was recorded last year especially for this release, it covers much of the same material as her 2011 interview for Criterion – from how they signed up to the piece to the original script; from the changes made to the production shoot and finished product, as well as the ensuing popularity of the piece. The fond reflections on her work with Travolta, their improvisations, and their great chemistry together, in particular, sound almost cut-and-pasted from the 2011 counterpart, but, still, all that means is that fans will be happy with owning either one of the interviews.

Producer George Litto gets his 18-minutes of fame here, offering his own memories of the work on the film, and charting the rather interesting tale of how the project got green-lit in the first place (basically, after hearing the premise, he offered to get De Palma the money to finance the film if De Palma, in turn, agreed to writer and direct) as well as the casting of the key actors. Probably one of the best interviews on offer here.

This near-half-hour piece has composter Pino Donaggio chatting in Italian (with subtitles) about his career as a singer, his background in music, becoming famous, working on films (including Don’t Look Now), and then collaborating with De Palma on a couple of projects. He talks in detail about how he came up with the score for Blow Out; the blend of music cues he used, the orchestral work, and the strings he added. This makes for a nice accompaniment, particularly for those interested in the score and in seeing the ideas behind some of the music cues utilised.

The disc is rounded off by an Image Gallery, the Original Theatrical Trailer and a Booklet.

Career-best Travolta; De Palma at the peak of his striking style-meets-substance approach, Blow Out has been perpetually underrated but has thankfully only grown in popularity in the decades since its release. The thriller thrives on its multi-layered format, pulling you into a story that works on so many different levels all at the same time, and taking you on a character-driven voyage where every element of style gets you further into the heads of the protagonists. It is a great suspense film, taking the archetypal bleak seventies-era political conspiracy thriller mould and breaking it for a new, more adventurous Hollywood revolution. And if you can handle the more dated tropes of this particular production, you will be richly rewarded by a demanding piece of innovative filmmaking.

Coming to Region B-locked UK Blu-ray we get an almost identical release to Criterion’s 2011 Region A-locked US Blu-ray release, apart from the extras, which are entirely different – but almost as good. Fans who have been waiting for a UK release (we’ve already had a Region B-friendly release from France which is near-identical) should consider this a worthy equivalent to Criterion’s earlier effort, but the real problem comes for those who already own the Criterion title and are big enough fans that they are seriously considering picking this one up just to have all the extras. Either way, this package is recommended.