Upgrade did this better... and bloodier 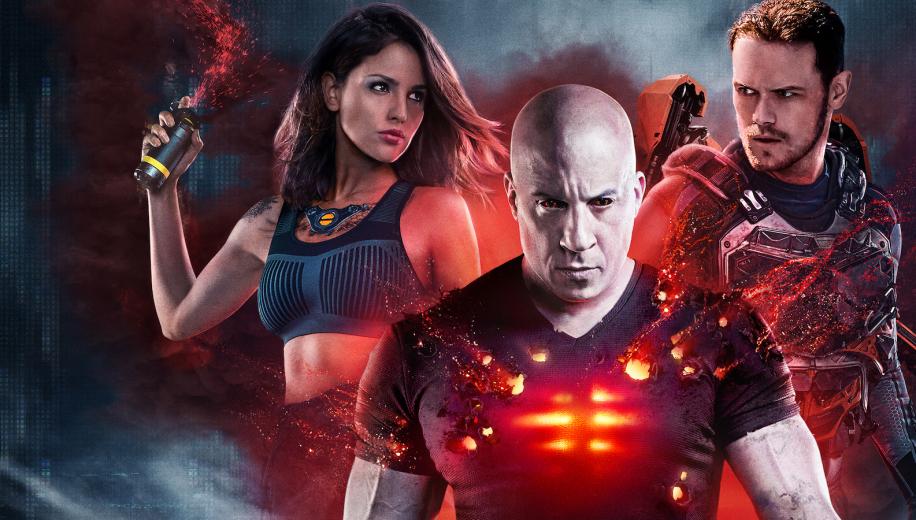 The world's first self-proclaimed multicultural megastar tanks another leading vehicle, cementing the notion that only his ensemble Fast and Furious films work.

The guy's an undeniably charismatic star, with a very distinctive cadence, but infinitely more interesting when he tries something a little different - and arguably before he got too big for his own boots (Saving Private Ryan, Boiler Room and even the underrated The Iron Giant are unusual, atypical early roles that demanded something more than just muscle which, back then, he was eager enough to give), and these days he's only really engaging in the Fast and Furious series, mostly thanks to a great supporting cast. Over the last decade, he's tried a few attempts to bring new franchises alive to supplant his F&F salary - as well as still investing in his labour of love Pitch Black saga with the decent enough Riddick - but either they're not different enough or he's not different enough in them, with The Last Witch Hunter and now Bloodshot both primed for Diesel-led franchises and both, ironically, likely stopped dead in their tracks by Diesel himself, who can't quite bring anything new to the table; at least not like he could back when he started.

It's not all Diesel's fault though, this is extremely familiar generic comic book plotting, attempting to make that part of the joke (the in-movie reference to scenes being scripted from cliched films is a pretty veil), but not quite selling the pitch, which is basically Diesel's resurrected (and now super-) soldier going on a targeted rampage until he learns 'the truth'. It never really bothers to escape direct comparisons to Universal Soldier meets Robocop meets Wolverine (with a bit of Terminator 2 - or, worse yet, Terminator: Genisys-style nano-rejuvenation - thrown into the mix), and Diesel never really feels like he's playing a new character, which unfortunately doesn't give it much distinction.

In action terms, there's some stylish and even occasionally impressively innovative setpieces, which arguably peak early with a superb red-hued tunnel assault, but enjoy some suitably destructive clashes for the super-healing protagonist, but the plot spoon-feeding dilutes any chance of impact from the telegraphed twists along the way, with far too much subsequent exposition and a near two hour runtime that needed to be far closer to - if not under - 90 minutes to feel taut and at least semi-thrilling. Nonetheless, it's hardly a car-crash of an exercise, delivering action with brutal - albeit bloodless and PG-13 - efficiency, affording some punch from Diesel and some impossibly formed eye-candy from Eiza Gonzalez (who it feels like Diesel wanted to win over after she made Hobbs & Shaw), whilst Guy Pearce is the wasted actor of the hour. It's serviceable, mildly diverting and occasionally maybe even a little bit different, but ultimately rolling up a big ball of cliches and painting them a new shade of red likely still won't lead to a successful franchise and Diesel likely will never escape his Fast and Furious baby. Upgrade did this better, for a whole lot less money.

Bloodshot comes to UK 4K Ultra HD Blu-ray courtesy of Sony, looking to be likely identical to their preceding US counterpart, with a pretty impressive native 4K presentation for this Ultra HD Blu-ray release.

Bloodshot is a modern digitally shot production teeming with decent CG effects work and some wild comic book-style stylistic flourishes which make the palette explode in HDR. Detail is excellent, immaculate even, with a rich image teeming with intricacies and nuances; skin, hair, scars, tattoos, battle damage and clothing all come through perfectly. The opening sequence is stylistically a little more gritty, and thus feels a smidge more noisy, but it's barely perceptible, and suits the scene in comparison to what is to follow, which is thereafter a pretty slick ride commensurate to what you'd expect from a native 4K, digitally shot, medium budget, comic book-based 'superhero' actioner.

Needless to say, HDR and WCG take this several levels above the SDR Blu-ray presentation, affording a whole extra layer to the colour scheme, which is of particular importance given how striking the tones utilised are - the early red-cast tunnel action sequence is unbelievably potent, with reds in particularly benefiting from the 4K HDR upgrade, showcasing no signs of bleeding and instead merely popping out of the screen with visual intensity. The tones are blindingly striking, and the set piece is a disc highlight, whilst other tones are equally well served in other scenes, from the swimming shot set against blue to the increasingly large-scale action as the film reaches its crescendo, with solid support from rich, inky blacks and - at the other spectrum end - bright peak whites. Irrespective of the film itself, the content provides some of the most striking HDR and WCG implementation on the format.

Bloodshot also provides an impressive upgrade on the 4K format courtesy of an absolutely demo and reference object-based 3D High Definition immersive audio track in the form of Dolby Atmos, which will likely blow you away.

Dialogue, whilst hardly key to this affair, remains clearly and coherently disseminated throughout, whilst a largely generic score churns along in the background, attempting to place urgency where the feature might otherwise be lacking some, and impact where required too, however above both of these components it's the effects that define the track, with a lot of gunshots and body damage (even if it is still largely bloodless), some nice explosions and general mass chaos. The whole thing is laced with some potent bass, and sports a very immersive feel (the nanites creep around your soundscape, whilst some nice directionality can be heard across the array). It's a tremendous track.
﻿

The 4K disc itself rather peculiarly just ports over the Deleted Scenes and Alternate Ending (although that is handy if you want to quickly skip over to them immediately after playback), whilst the remainder of the nice but hardly expansive extras are on the accompanying Blu-ray.

A couple of modest behind the scenes Featurettes, a gag reel and some previews complete the package on the accompanying Blu-ray.

Bloodshot doesn't really do anything new at all, and the vague entertainment it affords seems unlikely to result in the intended Diesel-driven new comic book superhero universe, but he's got that already covered with the Fast and Furious franchise, so it's no big loss.

Sony's UK 4K Blu-ray release of Bloodshot ﻿looks and sounds tremendous, with native 4K and Dolby Atmos working to deliver a demo and reference audiovisual ride. There are also a couple of extras, leaving this an excellent purchase for fans.