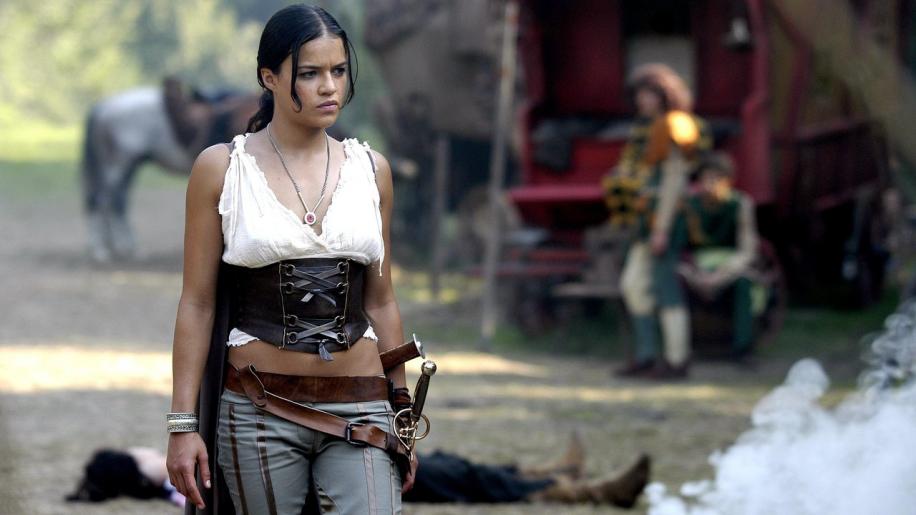 Bloodrayne has an anamorphic 1.85:1 image and, if nothing else, it is certainly colourful and extremely warm. As I mentioned earlier, the TV show polish and sheen of the likes of Xena or Hercules is very much in evidence with bold primaries and a thickness of colour that makes the image throb on the screen. But, whilst this looks nice and rich and vibrant, it conspires to rob the image of any natural quality, leaving much of the film looking quite artificial and set-bound, even when it is not. Boll's filming style is quite restricted and not very cinematic - he frames things too conveniently front and centre - which makes the action look even more confined, again adding to the TV show look of the movie and denying the image any real sense of scale, width or depth.

Detail, on the whole, is actually quite good, offering lots of clarity on jewellery, wounds and spraying blood, the sweat on Rayne's heaving cleavage or the gleam of the dorky-looking weaponry. Close-up detail fares best, with the TV-style image failing to pinpoint distant objects or background action with much sharpness although, barring some ill-fitting riding sequences across the mountains that have been filmed from a helicopter, most things seem to happen up close and personal. Black levels are pretty decent too, making the most of some depth in the dungeons and courtyards of the old castles and towns. Flickering orange torchlight comes across well amidst the shadows. There is a degree of edge enhancement - which gives the opening titles an ugly appearance - and a couple of instances of slow-processing in some dark corners, but this is a nice, clean and colourful transfer, overall. Equipped with a DD 5.1 track as well as a 2.0 mix, Bloodrayne makes a decent-enough stab at creating surround sound, but the specifics are mainly consigned to effects - whisperings, trickling water etc - that emanate from the rears without a true sense of attachment to the on-screen action. The many swordfights feature plentiful clangs and clashes around the set-up, but the surrounds just sound too artificial and dislocated for my liking. Much better is the sound design stretched across the frontal array, which offers up some reasonably effective steerage - voices and effects - and just feels a little weightier and better constructed.

It must be mentioned that the lip-synching on certain characters is out, with the voices actually sounding quite alien to the mouths they are supposed to be coming from, but this effect is not constant throughout the whole film. Yet, despite this, dialogue is always clear and distinct. The score, whilst naff, is afforded a little of bit of presence and is often allowed to sweep around the set-up, although again, this sounds a little bit removed from the film itself.

So, the audio is a bit of mishmash really and not a good example of full 5.1 surround. This is a 2-disc set, folks ... but don't get excited. As if you were, eh?The first disc concerns the movie itself, with some familiar-sounding gubbins to pad it out. The second disc is actually the PC videogame version of Bloodrayne 2. Well, I don't play games anymore and I confess to having not one ounce of interest in this one especially. However, I have been reliably informed that it is considerably better than the movie. But, to my mind, that really isn't saying much, so I'll pass over this element and scoot straight to Boll's special features.

First off, the Commentary track actually has a few more participants than is advertised. As well as Boll - who is surprisingly funny, folks - there is Producer Shawn Williamson and stars Kristanna Loken and Will Sanderson. To be honest, this is a lot more entertaining than it may sound. In fact, it is probably the best thing on the disc ... certainly much better than the movie it rides on top of. The mood is one of free-wheeling mickey-take, and there is much fun to be had at Boll's expense, particularly his thick German accent which, without wanting to sound discriminatory, really is funny. They follow the onscreen action pretty closely, pointing out things here and there - like one-another's horse-riding or fighting skills, or the fact that Loken, herself, decided she would like to put the bite on a more nubile and attractive young woman than the crone she was scripted to go for - and the laughable sex scene between Rayne and Sebastian is extensively covered too. It is strange to hear an actress discuss such a sequence as she watches herself having simulated sex on film. And ... kind of kinky, too. But that might just be me, folks. Hey, I've got to try and find something of interest with this release, havent' I? The group even make reference to another commentary track on the disc - from the visual effects people. But, guess what? It isn't actually there.

The Dinner With Uwe Boll is ... wait for it ... exactly that - the talent-less director sitting down to a Thai meal with two unnamed interviewers who protract the session for forty-seven minutes or so. These American interviewers - one a bloke who greedily ploughs through his food and quaffs red wine like it was going out of fashion, and the other a ditzy (but cute) girl who merely picks at her meal like a sparrow - ask the most mundane and idiotic questions to which Boll replies with super-long and comprehensive answers. As an interview, this is a very unusual and off-putting approach. The first half of the session is dictated by people - mostly the male interviewer I should make clear - stabbing food, chewing, swallowing and guzzling wine, all to the accompaniment of forks clattering around plates. The intention was clearly to strike a nice, informal at-home-with-Uwe atmosphere, but the whole episode is so crudely done that the facts about how the filmmaker started in the business - he was inspired by Brando in Mutiny On The Bounty, apparently - and his ongoing fascination for videogame adaptations and gore is distracted by the food seen going cold on the girl's plate. It is, up until the point when the plates mysteriously vanish from the table, quite a nauseating interview. And, from then on, I'm afraid that I was past caring what Boll had to say for himself. Therefore, what could have been a reasonably informative examination of what went into creating the world's worst director, has been utterly squandered in favour of a daft gimmicky style and woefully inept quizzing.

The Storyboards are six pathetic pages of tiny little sketches concerning one sequence in the film. The images are so small and uninteresting that the feature is rendered totally redundant.

Just as worthless is the inappropriately-titled CGI Making Of (5.20 mins) is just a montage of effects sequences that have a wipe-screen transform the original footage into the final full-CG shot. This, on my version at least, plays uncomfortably without sound. I say uncomfortably because I got the distinct impression that a voiceover was meant to have been there. It might just be me ... but it just didn't feel right, somehow. Anyway, it is a moot point really, because the feature is worthless and teaches us absolutely nothing about how the effects were achieved. Quite simply, this is not a making of in any sense of the term.

And finally we get a ridiculously-narrated Theatrical Trailer (1.35 mins) which rounds off this frankly weird set of extras.

Pathetic, folks. If you do have the misfortune to find yourself viewing this disc, then my advice is to watch it with the commentary track playing and view the Dinner With Uwe segment at x30 speed - just to watch those plates disappear and the wines glasses rapidly empty. Utterly lousy filmmaking and a sheer embarrassment for all concerned. Do not waste your time or your hard-earned on this talent-wasteland because there really isn't any entertainment to be found in it. Unlike many people who can derive some sort of masochistic pleasure from sitting through dross like this, I found the experience quite excruciating and seriously wish I could claim back the time spent on covering it. Don't encourage Boll by ever investing in any of his unique catalogue of garbage ... the man should not be allowed anymore attempts at making movies. He has proved that he just can't do it.