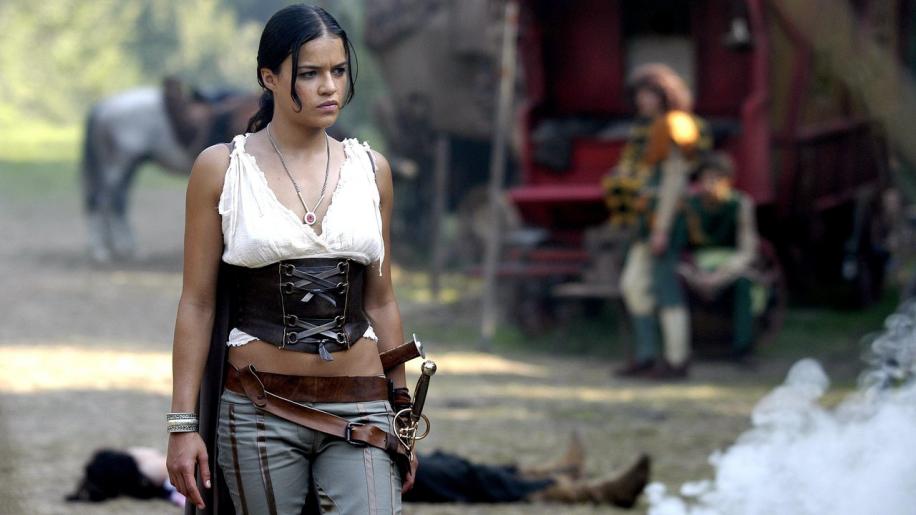 It's funny reviewing a film from German videogame-to-movie adapter Uwe Boll because you genuinely know what to expect even before you put the disc in the machine. And, try as I might to be different from everyone else and, at least, attempt to view his latest travesty with some kind of dispassionate objectivity, I'm afraid that Boll's Bloodrayne proved itself to be exactly the wasted chunk of celluloid cack-handedness that I had expected all along. In fact it seemed positively proud to reveal itself as being as lamely plotted, embarrassingly acted and as ineptly directed since ... well, Boll's last wallow in bad scripting, bad acting and bad direction. But then ... at least he's consistent.

“I like you Brimstone people ... you never make a mess.”

Featuring a plethora of has-beens and never-will-be's, Uwe (Alone In The Dark) Boll's latest game-inspired gore-a-thon revolves around a creaky set of B-horror clichés - a vampiress with a heart, a secret society of warriors sworn to rid the world of the undead (the Brimstone Society), some sacred amulets that bestow awesome power and a roster of bloodthirsty villains that have to be battled in various set-piece confrontations - but manages almost effortlessly to reduce such familiar genre foundations to the realms of sheer tedium through clumsy storytelling, fight choreography so bad it wouldn't look out of place in the kids' TV show Lazy Town and characters whose back-stories could only have been conceived on the back of an ant's knuckle. With T3's Kristanna Loken assuming the dynamic role of Rayne - a vampire-babe who runs away from the cruel circus that exhibited her as a freak - and Michael Madsen as the experienced ghoul-destroyer Vladimir, who takes her in and helps to train and guide her, Boll's film bumbles along from one bloody skirmish to another, introducing us to various ne'er-do-wells in the vampire hierarchy whilst attempting to fill in some narrative blanks with a fearsome amount of exposition. Throw in the hunt for some mystical amulet and the whole shebang culminates in a poorly staged showdown with Ben Kingsley's vampire lord, Kagen ... the outcome of which matters not one jot and is barely comprehensible under the confused hand of Uwe Boll.

“I will not harm you. I only wish to kill vampires.”

Enrolling in the trusty, lusty band of warriors, Rayne strides about in a natty red and black leather ensemble, learns some pretty laughable martial arts and suffers a lamentable and nauseating amount of hazy flashbacks. Siding with Madsen's mob also sees her locking horns with Michelle (SWAT) Rodriquez's pouty vamp-slaying vixen Katarin and Matt Davis's bland rent-a-hero Sebastian, with whom she predictably and risibly finds love. Somewhere along the way, there is time for betrayal, a misty boat trip that looks like it was filmed in someone's pool, a lot of awkward horse-riding and Billy Zane's deliriously loopy turn as some string-pulling no-mark called Elrich. I really can't recall just what his involvement in the story is all about, but at least he allows for some giggles whenever he is on-screen. But the point of a Uwe Boll film is not the plot is it? It's just a monumental excuse to hurl ropey CG across the screen and inject as much splatter as possible. But, even when reaching for the lowest rung on the entertainment ladder, Boll still loses his grip on the excitement with a series of the most un-eye-catching and suspense-less set-pieces. To wit, Rayne's quest to find out who she really is and what her ultimate destiny has in store for her throws up a surprisingly low roster of gamer's delights, with only one such cheese-ball sequence standing out, in which she has to navigate a room full of lousy CG swirling blades in order to obtain something to do with an ancient vampire's eye. The rest of the movie is simply clogged up with appallingly bad fight scenes and a plot thread so tenuous that a flea could cut the continuity with a sneeze.

“Now she has the Eye, we have to capture her ... and bring her back to Brimstone before it's too late.”

Too late for what, exactly?

Madsen, even amongst this diabolical crowd of zero-talenters , is the absolute nadir of the film. He lumbers around looking like a slightly slimmer Steven Seagal - but only just - hefting an embarrassingly shiny toy-shop sword that he is hardly able to swing and seems to think that he is above all this juvenile fantasy nonsense. He obviously feels a bit silly in his costume and ludicrous straggly wig, but the simple truth is that he isn't actually good enough even to be in trash like this. Michael, mate, you can't act. At least everyone else involved seems to be trying their best, perhaps realising that this is the most they will ever amount to. Even Meatloaf, in a wacky appearance as the decadent, debauched vampire aristocrat Leonid gives a more vigorous performance than Madsen's narcoleptic effort. Though, it must also be stated that he gets to cavort with a bevy of attractive young nudes so, at least, he had the proper motivation for the role. But Madsen just looks and sounds so idiotic that even the merest hint of mood is lost whenever he appears on screen. Matt Davis is a pure and utter nobody, and his performance here will no doubt ensure that this acting status continues. And Will Sanderson's cross-eyes and geek-ish shave-pattern hairdo can't help but defuse any threat that his evil henchman, Domastir, is supposed to supply. He also has a bit of a Bill Paxton look about him that, again, only lessens the intimidation he is meant to convey. In all fairness, these lesser-known stars acquit themselves with as much gusto as they can, given the limitations of the hackneyed script, but their efforts are let down by the bigger names. Udo Kier, a veteran genre player with the likes of Blade, Flesh For Frankenstein and Suspiria under his belt, just makes google-eyes as he shamelessly chews the scenery and Billy Zane turns in one the hammiest performances he's ever given - and that is saying something. Like Madsen, Zane looks totally preposterous under a goofball wig. But, of course, the greatest downfall has to be that charted by Ghandi himself, Ben Kingsley. Quite what he is doing in this professional quagmire, at first, eluded me. But then if you watch how he preens, sneers and tries to look menacing as the stultifyingly dull vampire lord Kagen ... you'll understand why Boll hired him - whatever talent he once possessed has sadly now evaporated. Mind you, if the director cannot elicit any enthusiasm from his cast, then why should we blame the likes of the once-venerated Kingsley for delivering some of the worst lines in motion picture history in the voice and the style of a sleepwalking mute? Honestly, if you should ever find yourself watching this cesspit of a film (and never, ever admit to it if you do), check out the moment when the vicious Lord Kagen sends out his warriors (or thralls, as he calls them) - I swear to God that Kingsley yawns in boredom as he mumbles out his dreadful lines. I know I did.

“If they want a fight - a fight they will get!”

Uwe Boll's direction is, at best, flaccid. The fight scenes go on for far too long and generate no sense of the stakes escalating or the tension mounting as the film goes on. His wayward use of flashbacks becomes a relentless gimmick employed when the plot runs out of steam ... so it should come as no surprise that we get an awful lot of flashbacks in Bloodrayne. His camerawork is TV show-inspired, with no elaboration on a strict front and centre approach to his subjects. The only moments when the film opens up are when we are treated to the travelogue shots of people riding across mountain ridges or vast high plateaus - and Boll, himself, didn't even direct these vaguely inspired, but ill-fitting sequences. As you will discover if you venture into the largely un-recommended special features, the film utilised a lot of genuine Romanian locations - all towns, castles and courtyards that have remained the same for centuries - yet his juvenile style leaves such a rich visual font looking more akin to some Hollywood backlot and a gaggle of ramshackle soundstages. Honestly, there is nothing here that wouldn't look out of place in an episode of Xena or Hercules. Just how a director could squander such God-given lush locations as these is, frankly, beyond me. And his pacing is terrible. He handles scenes with absolutely no sense of point or narrative direction, merely throwing together a smorgasbord of genre staples and hoping they'll gel. The training montage is laugh-out loud funny, but in a truly pathetic kind of way. Rayne puts her instructor on the deck only for wise old Madsen to growl that “Physical strength is nothing without control.” She's just floored the guy ... what does it matter how she achieved it?

This is still very gory stuff. There are heads hacked off, bodies cleaved in two, swords rammed through some very unfortunate faces and blood constantly sprays from each and every wound inflicted like a homage to the Lone Wolf And Cub samurai series (aka the Shogun Assassin amalgamation of the classic Japanese movies). But, unfortunately, none of these effects are in the least bit convincing. The CG face-morphings are hardly groundbreaking, and surprisingly subtle given the full-blooded nature of the violence, but the lashings of gore splashing across the screen are the wrong shade of red and look far too watery to elicit any shudders of revulsion or have any gorehounds rubbing their hands with glee. As far as the Unrated aspect of this movie goes, there is a truly weird montage of extended gore scenes that plays even before the film has ended. Quite what this segment is meant to be is never explained. Even in the Commentary, Boll cuts the chatter before the montage begins and thus we are left in narrative limbo as more limbs are severed and heads bashed into mush in very rough chronological order, kind of like a bloody highlights compilation. In fact, this set of gore-soaked scenes plays a lot better than the film they dripped out of. If Bloodrayne was just this two-minute collection it would probably get a higher mark from me.

As it stands though, Bloodrayne is awful, folks. Just awful. Avoid at all costs.