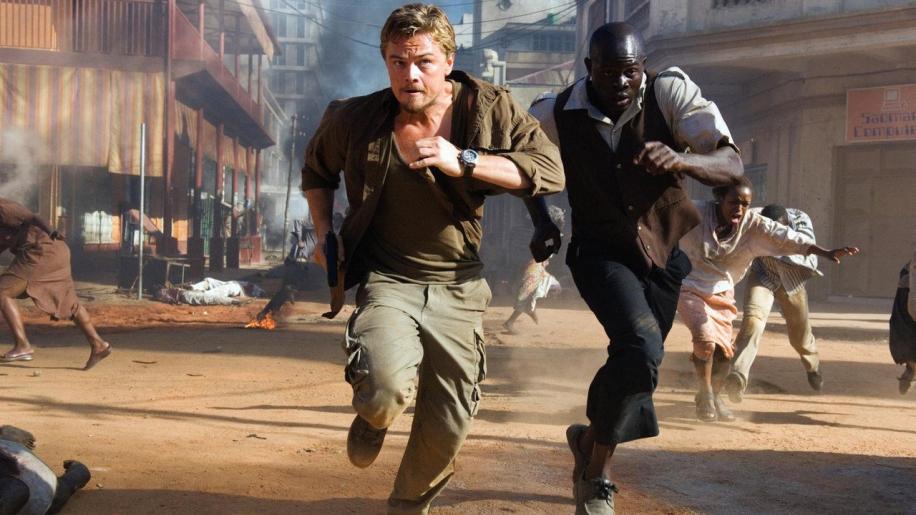 “Will God ever forgive us for what we've done to each other?”

Leonardo DiCaprio has come a long way since Titanic. He used to be an actor who would turn me away from movies, a talent-less poster-boy with youthful looks that could surely only mean that he would never be taken seriously in an 'adult' role. When he went on to be labelled as DeNiro's successor, particularly as Scorsese's new top student, he tried his best to break free of this mould, but even the likes of Gangs of New York (where he was skilfully acted off screen by the great Daniel Day Lewis) could not convince me that this was entirely possible. But in 2004 he made The Aviator, again with Scorsese, and actually managed to convince as the eccentric Howard Hughes. Dare I say it, it was the kind of thing you would have expected from a young DeNiro - showcasing a previously unseen ability to totally embrace a role so much so that you forget that he is playing a character and start to see him only as Hughes. Proving that this was not a one-off occurrence, he followed it up with another Scorsese drama, the Departed. And whilst I dislike the movie for its total lack of originality (it blatantly and utterly rips off the far superior Hong Kong original Infernal Affairs), kudos to DiCaprio for again being compelling and convincing in one of the lead roles, outshining everybody (except perhaps Mark Wahlberg). Next up was the Oscar-nominated conflict-diamond-smuggling epic, Blood Diamond, where he got to star opposite the powerful Djimon Hounsou. So, is DiCaprio capable of pulling off a hat-trick?

Civil war is raging in Sierra Leone, West Africa, where the Revolutionary United Front is busy oppressing innocent families by chopping off their hands to prevent them voting in a 'democratically' elected representative. They are heavily armed and well funded, mainly because they enlist those they do not kill or maim to work in their diamond mines. With the latest recruitment drive, a simple fisherman, Solomon Vandy, is swept up and separated from his family. Going to work in the mines, he discovers one of the largest pink diamonds that he has ever seen and manages to hide it just as the government troops arrive to raid the camp. He soon finds himself in the same prison as gun smuggler Danny Archer, who was caught trafficking diamonds. When Archer learns of the diamond, he decides that he could make a huge amount of money by getting his hands on it. All Solomon wants in return is his son back, after his having been taken by the Rebels who want to train him to fight. It seems simple enough, but the struggle to retrieve the diamond and get back Solomon's son is anything but, taking Archer on a journey into hell, in a country torn to hell, and maybe even putting him on the path to redemption given all of the mercenary acts he has committed in his bloody past.

Blood Diamond is a superior war drama, dealing with issues like genocide and self-destruction and observing how families are torn apart and turned against each other by the hell that they are caught up in. It is brutal, bloody and unforgiving, often showcasing very little hope in this Godforsaken land. There is also a dark political underbelly, exposing the fictional (but all too easy to believe is true) trafficking route of the notorious conflict diamonds, and all the big-business corruption involved along the way. But interweaved within all of the other topical and compelling story strands we also have the exploration of three very different characters: the smuggler Archer, the desperate fisherman and father Solomon and the journalist, Maddy, who senses that - between them - there is one hell of a story here to be written.

DiCaprio pulls off yet another awesome performance here as the cynical mercenary, who appears to just want his one big score to get out of the continent, and is seemingly prepared to do whatever it takes, use whomever he has to, to cut free. He is well trained, with an exceptional survival instinct and keen ability to improvise, but he sold his soul a long time ago, in amongst all the blood diamonds and guns he traded. His bond with Solomon is based entirely on securing the diamond, but when their relationship does eventually get to develop, so does the bond between them. Solomon is the epitome of morality, a desperate father who is enraged by his innate sense of injustice over what is occurring around him. Played by Djimon Hounsou (The Island, Constantine), he is certainly a powerful, emotional character, but he is more often than not reduced to little more than a shouting, screaming mess. Still, he plays off as a solid foil to DiCaprio's smuggler, although it is DiCaprio who shines through as the more compelling and convincing of the two, complete with a flawless African accent.

The absolutely gorgeous Jennifer Connolly (A Beautiful Mind, Requiem for a Dream) completes the trio as the dedicated reporter who is desperate to uncover the 'conflict diamond conspiracy' and get her big story. Despite her reservations, she cannot help but both admire and sympathise with Archer's lost soul, and the chemistry between Connolly and DiCaprio is undeniable, despite the fact that everything is portrayed using words and gestures, with almost no contact. Connolly has had a great little comeback recently, getting meatier and meatier mainstream roles, but tending to choose solid dramas rather than shallow tosh. Rounding out the cast we have recognisable faces like Arnold Vosloo (The Mummy movies, 24) as Archer's old Army Colonel, Brit David Harewood (The Merchant of Venice, The Vice) as the leader of the RUF rebels, and Michael Sheen (Tony Blair in The Queen, the Underworld movies) as the slimy businessman who trades the diamonds once they get back to the West.

Blood Diamond is not without some flaws - it occasionally lapses into Hollywoodland, particularly with regard to the Lord of the Rings-like unnecessary, tacked-on ending - but it is still a compelling, broad almost epic production, pitched within the dramatic, wartorn conflict zone of Sierra Leone. With the dark, anti-hero protagonist, the cynical political undertones and the savage depictions of civil war at its most monstrous, the movie grips throughout, never betraying its near-two-and-a-half-hour runtime. Superbly directed by The Last Samurai's Edward Zwick, with some breathtaking cinematography - both with respect to the brutal battle sequences and the sumptuous landscapes - and with a well-plotted story filled out by some solid performances, not least another captivating central Oscar-worthy turn from the increasingly versatile DiCaprio, the movie comes strongly recommended. You will not be disappointed.

“God left this place a long time ago.”