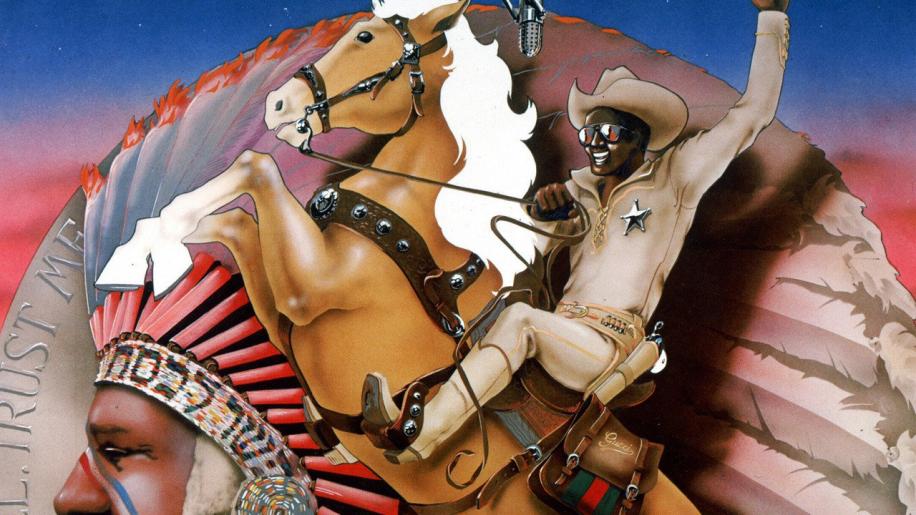 I was mightily impressed with just what has been achieved image wise. Yes, the image does still suffer from a few scratches and marks throughout, and there is still some video noise in a few scenes, but overall the picture here is vibrant, crisp, sharp and detailed! In many ways the image here reminded me of what has been accomplished with Raiders Of The Lost Ark, and whilst this 30th Anniversary DVD release of Blazing Saddles cannot quite compete with that other classic it comes closer than I would have thought possible. Colours are rich and solid looking and there's a real depth of field quality to the image that comes through even on really large screens, where black levels can be seen to be deep and impressively dark with contrast levels being equally impressive.

Although edge enhancement has been used it's not overly intrusive, and despite a few soft, out of focus scenes, overall I thought the quality afforded by the anamorphically enhanced 2.40:1 image was pretty darn good!

Things fair slightly less well, audio wise. Yes, the remastered Dolby Digital 5.1 448Kbps soundtrack is always clear and intelligible, but as may be expected from a movie made back in 1974 there is a severe lack of rear surround action - indeed there's a lack of almost [b]any[/b] kind of action! The numerous musical interludes sound impressively detailed, with reasonable bass extension - something that's definitely lacking during other, more needy moments such as explosions and gunshots. These moments feel shallow and... well, “old style” and leave only one real choice for stand out audio moment... the theme tune sung by Frankie Laine, with words written by Mel Brooks himself. If only I could enjoy the movie as much as I enjoy that song!

Mel Brooks' audio commentary is an informative look back at the making of Blazing Saddles. It's also a dry and slightly forced affair that never really comes alive. Maybe it's because I find the movie a bit of a drag, but listening to Brooks blether on about things had a sort of soporific effect on me...

After a short tribute to Madeline Kahn we're treated to Back In The Saddle - an enjoyable half hour's worth of reminiscences including comments from Brooks, Korman, Gene Wilder and a few others. If you're a Saddles fan, I'm sure you'll enjoy this.

Lou Gossett reprises the role of Black Bart in the pilot episode from the series of the same name... and this I found even less funny than BS!

Next up are a few “Additional Scenes” - some of which have been seen edited into American TV showings. A theatrical trailer rounds off the ever-so-slightly disappointing set of supplemental features.

Although it's not for me, if you're a Blazing Saddles fan I'm sure this DVD would be deserving of a place in your collection. With a nicely-detailed image, adequate sound and a reasonable amount of, slightly staid, extras maybe this 30th Anniversary release deserves an even break from me!