A 2v2 tag fighter and a four-way mash-up 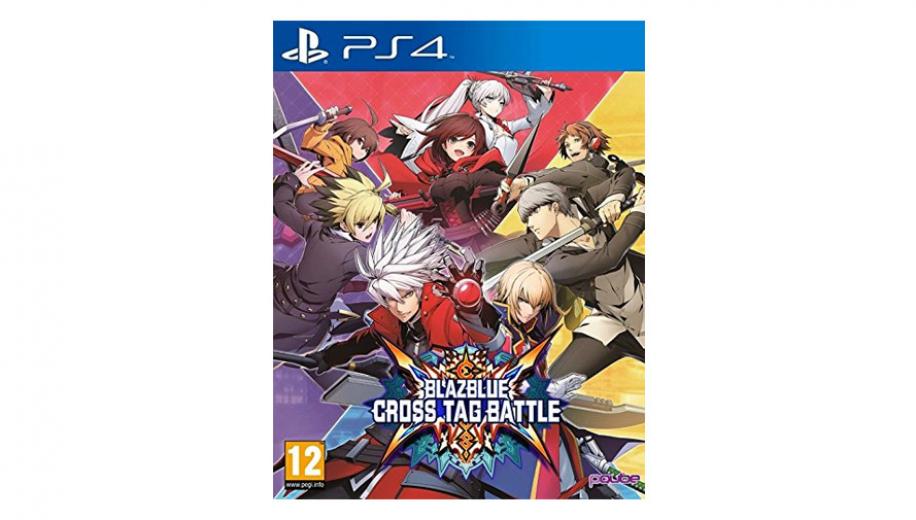 Imagine how confused somebody would be going into Marvel Vs Capcom having never seen a Marvel comic, TV show, or movie, and never played a Capcom game. Imagine what someone who had been living in a Nintendo-free bunker their entire life might make of the colourful and crazy ensemble casts of the Super Smash Bros. games. For the vast majority of the gaming population, that same sense of abject confusion will likely be what awaits in Blazblue: Cross Tag Battle, the latest release from fighting scene darlings, Arc System Works. It's a 2v2 tag fighter and a four-way mash-up starring characters from a leading anime-inspired fighting brand (Blazblue), a fan-favourite JRPG (Persona 4), a niche fighter (Under Night In-Birth) and an anime-esque show made in the US (RWBY)... obviously, players who know and appreciate most or all of those properties are the target market and they've likely had their eye on this for a while, but provided you're au fait with at least one of the featured series, you should be able to find your footing quickly enough. Those who didn't see a single title they recognise in those last few lines, however, will likely feel completely out of their depth, at least to begin with. The good news for people that fall into either of the last two categories above is that Cross Tag Battle is comfortably the easiest fighter to just pick up and play that Arc has made to date. All three featured games from which characters are pulled had their own unique systems and mechanics, and those are almost entirely done away with or amalgamated into regular gameplay in the interest of simplicity. Blazblue characters, for instance, largely no longer have to worry so much about fighter-specific Drive abilities, while Persona summons are just part of regular special attacks now for the Persona 4 Arena crew, rather than being assigned to a separate set of buttons. Cross Tag Battle's button layout itself is remarkably simple, with just two standard attack buttons in light and heavy flavours, a Clash button (which launches team attacks while grounded, sweeps while crouching, and performs a powerful knockdown attack while in the air) and two tag buttons – one to call in a quick assist and another to switch your partner in as the active character. Special move inputs too are simplified, with nothing more complex than a basic quarter circle 'fireball' motion in sight and with dragon punches and similar reversal attacks mapped to a two-button combo (light+tag together) to give every character and player easy access to a 'get off me' button. While the game's basic moves and special attacks may have been simplified almost as far as possible without making the game play itself, the other systems still house a good deal of depth. Almost to the point that their complexities will probably be lost on the kind of player an ostensibly two-button fighter would be aimed at, in fact. Tag assists, for example, can be used on a basic level to add a few hits to a combo or provide covering strikes from an ally. But go deeper with the tag functionality and extra inputs allow you to swap active characters during the assist for even more combo options or even to have both fighters on-screen and attacking in unison for a brief time – it's the kind of system that only starts to produce fruit after a good few hours in training mode with your chosen duo, but its potential is massive in the right hands. Tactics mode does a good job of explaining these systems on a relatively basic level, with character-specific combo trials and situational Missions to help you get better both with your main characters and with the game's mechanics overall. It's a little daunting, but it's well worth doing.

It's a shame the same can't really be said for the game's nonsensical story modes, and while it might do its best to try and explain away the scenario in which the hapless fighters from four very different universes find themselves, it's just a bit flat, boring and bare-bones. There's the odd neat exchange or slice of fan service for the diehards to bask in, but only the Blazblue one has a modicum of substance thanks to the odd dialogue choice and a few different endings. The actual fights in them are tepid across the board – AI teams may as well not show up for the most part. Perhaps worst of all is including DLC fighters as opponents in this mode while expecting players to shell out extra to use them, which is, to put it nicely, extremely bloody cheeky. It's not as though the base roster is exactly packed to begin with at just 20 characters (the last Blazblue game alone had almost double that), so this tease of held-back content really leaves a sour taste in the mouth. The core game is a mid-price release, to be fair, and the deluxe version (full-price) does get you all the featured characters and more to an overall total of 40 once they're all available, but it's still poor practice all the same. Fighters come in all shapes, sizes and play styles

It must be said, though, that the characters you do get in the base game are an interesting and varied bunch. Blazblue has by far the biggest pool to draw from and that's reflected in its ten representatives, compared to four a piece from Persona and Under Night and two from RWBY (with an extra two available as free DLC to level the playing field here and get the full main cast in the game). Fighters come in all shapes, sizes and play styles, from Under Night's hulking Waldstein who takes up most of the screen and can reach further still with his insane pokes to petite Blazblue troublemaker Rachel, who prefers to litter the stage with traps and hazards to stop opponents being able to close distance. It's way too early to be making judgement calls on balancing, but there's an argument to be made that it doesn't matter all that much anyway in a game like this. Crossover fighters often value spectacle and the potential for crazy antics above the kind of refinement and fine-tuning that goes into something like a Virtua Fighter game, and the fact that no one character stands out as brokenly good or unusably bad at this stage is good enough for us. It's meant to be fun, and it is. Whether it'll go on to have competitive legs is another story, but fighters typically get constant balance patches and updates, so there's always hope.

The selection of modes is a little lacking right now, especially for those who fear the beastly opponents that lurk online. Solo players only really have the brief story modes to smash out, then it's survival mode or simple versus matches against the CPU – Arc fighters often have some kind of creative solo 'adventure' mode of sorts where you power up characters as you play, but there's nothing to offer that kind of solo longevity here. Multiplayer lobbies are well-handled though, so as long as your skills are up to scratch and/or you're willing to learn the hard way, you should always be able to find a few willing opponents there to keep you busy for a while.

Only hits must-buy status for fighting fanatics and superfans We appreciate that Arc is trying to feel out a new release model with Cross Tag Battle, but we're just not sure it's working. Even for a mid-price release, the base game feels rather light on content and takes the piss a little by including held-back fighters as opponents.

The deluxe edition, meanwhile, fixes the character shortfall (and unplayable rival faux pas) but still doesn't solve the content shortage in other areas of the game to truly justify the same ticket price as, say, a mainline Blazblue or Guilty Gear release.

There can be no denying that the game is great fun whether you're a fighting game amateur that just enjoys it for one of the featured sets of characters or a stick-wielding pro just looking to pull off the craziest combos you can with the surprisingly robust tag system. But when the last few years have delivered so many brilliant fighting games that'll give you a lot more bang for your buck, this one only really hits must-buy status for fighting fanatics and superfans of the four featured franchises.