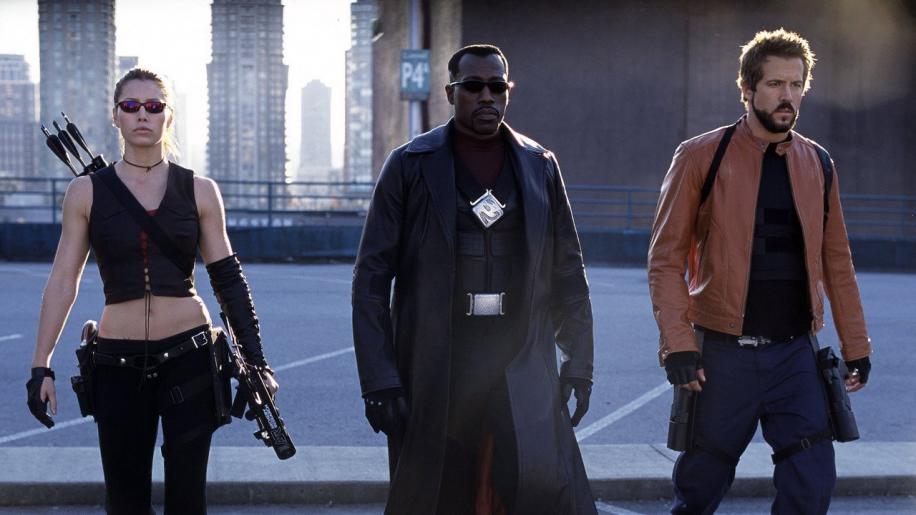 In the movies Dracula wears a cape and some old English guy always manages to save the day at the last minute with crosses and Holy water. But everybody knows the movies are full of shit. The truth is it started with Blade and it ended with him... and the rest of us were just along for the ride.

With a solid fanbase centred around two previous movie outings for our hybrid hero, Blade Trinity - as with any sequel - has something to be both compared to and to live up to. I was a little concerned knowing that wrestling superstar Triple H (Paul Michael Levesque) dons his acting boots here - and I wondered whether Mr. H's performance would be more Dwayne Johnson or Hulk Hogan? As it happens Levesque's abilities suit the movie perfectly...

As in the first two films, the vampire hoards have had enough. This time however, they decide to resurrect the original and most powerful bloodsucker of them all to tackle Blade... Dracula - or Drake as he's now known. To further their cause they have also started a smear campaign against the Daywalker and now the police and F.B.I. are after Blade. Luckily for our toothy hero he still has the assistance of Whistler (Kris Kristofferson) as well as the Nightstalkers, a team of vamp hunters headed by Abigail Whistler (Jessica Biel) and Hannibal King (Ryan Reynolds).

Sadly, Blade movies and acting prowess don't really go hand in hand, and Trinity takes a bit of a retrograde step. When I hanker to see more of Kris Kristofferson I tend to think that something may be amiss! And amiss they are - right from the off, as Danica Talos (Parker Posey) opens Drake's tomb I felt a little uneasy as she moves huge chunks of polystyrene, er... sorry, I mean rock. No amount of deep, powerful bass can disguise the fact the “rocks” are clearly anything but heavy. And again, this early scene gives glimpses of a somewhat frail, and ultimately silly, script... “There's something beneath us”, one of the vampires says - remember, they're searching for their leader's lair. The response? “You find a watch?” Hmmm.

And no matter how much I would like Trinity to be a worthy (perhaps final?) sequel, the reality is that it's simply average at best. Ryan Reynolds, whilst playing his part with aplomb, seems to have been encouraged to simply “ham it up” and at times merely comes across as annoying. Jessica Biel is completely miscast, Parker Posey really cannot act and Triple H as a Pomeranian dog lover is, well... suffice to say the image lives on!

Worst of all, Blade: Trinity reminds me of a Van Damme movie - hollow, by the numbers and with a final fight showdown that is a bit of a letdown. Whilst it seems that Wesley Snipes is unhappy with the outcome, it has also allegedly been suggested that the actor himself may in part be responsible for the movie's “averageness”. I guess we'll never know the true reasons behind the hype, but one thing is pretty certain - Blade: Trinity could have been a whole lot better.