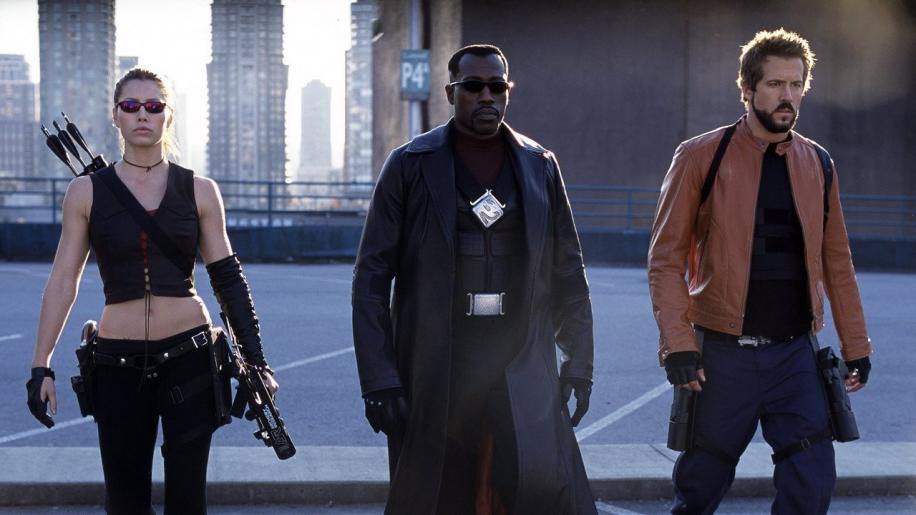 As one would expect of a Blade movie broody, dark scenes are the name of the day. This often equates to video noise and a general murkiness... but not here. Trinity has been blessed with a supremely clean transfer with virtually no grain and no sign of edge enhancement either. In fact, the only negative I can harbour against the image is that it lacks that “eye-popping candy” look, and even this is probably due to the slightly, and clearly deliberate, limited colour palette. Blacks appear really black and contrast levels are excellent. All in all the anamorphically enhanced 2.35:1 picture quality is thoroughly impressive.

If I had to use only one word to describe the audio side of things for Blade: Trinity it would be simple - bassy! Both Dolby Digital Ex (448Kbps) and DTS ES (768Kbps) tracks are excellent affairs, but it is the DTS option that wins the day with a slightly more open, spacious sound. For me, rear-panning effects aren't quite up there with reference quality DVDs; indeed from memory I think Blade II is better in the audio department, but this is still a storming affair with a music soundtrack that perfectly fits the style of the movie - loud and powerful! Bodies sizzle, crisply, into ash and gunshots sound impressively deep and powerful.

Ultimately, a little like Underworld, I thought it was all a little tiring. Whilst good, Blade: Trinity just lacks that certain something to really set it apart. It is disappointing that there are regular dropouts that occur throughout the theatrical cut only - in both DTS and Dolby Digital tracks.

You want extras? Blade: Trinity is the place to be then! Disc 1 includes two audio commentaries - the first with Writer/Producer/Director David Goyer, Ryan Reynolds and Jessica Biel; The second has David Goyer teaming up with Producers Peter Frankfurt and Lynn Harris, Cinematographer Gabriel Beristain, Production Designer Chris Gorak and Editor Howard E. Smith. Both commentaries can only be accessed whilst watching the Extended Edition. Onto disc 2 and New Line has filled a DVD with some really worthwhile supplemental features - director David Goyer, along with filmmakers and actors share just about as much info that you could want to know about Blade in Inside The World Of Blade: Trinity - a compilation of sixteen features that can be played individually or joined as a whole. Having watched this I found myself wanting to watch more Blade - can Goyer et al really leave the franchise with Trinity? Come on, give us a Blade Quadrilogy to get our teeth into!Goyer On Goyer has to have a mention here simply because the director insists that Trinity has the best script of the three Blade movies - although I bow to your expertise, Mr Goyer... I just have to disagree! There's also a clear hint here that there may very well be a Blade 4 movie at some point; which brings us neatly onto the Alternate Ending - werewolve/vampire hybrids - could this be where the fourth movie will take us? I'm not sure if such a move would work, but it could be a blast finding out!

The Blooper Reel is something of a misnomer and makes me wonder if any real fun was had on set!Rounding off disc 2 are Galleries, Trailers and some DVD Rom/Online Features.

Finally, New Line have included a slim Blade: Nightstalking comic book which is very nice. Ultimately though, despite the voluminous material and the hype and verbosity much of the supplemental features feels, a little like the movie, routine and by the numbers.

The original Blade movie introduced a new kind of comic book hero and Blade II took the story to blistering heights. Trinity feels like a retrograde step to me - fun yes, but somewhat lacking in identity meaning it really only works in context of those first two films. If Blade IV is ever made perhaps David Goyer can put things right.