No Blade = No Avengers. 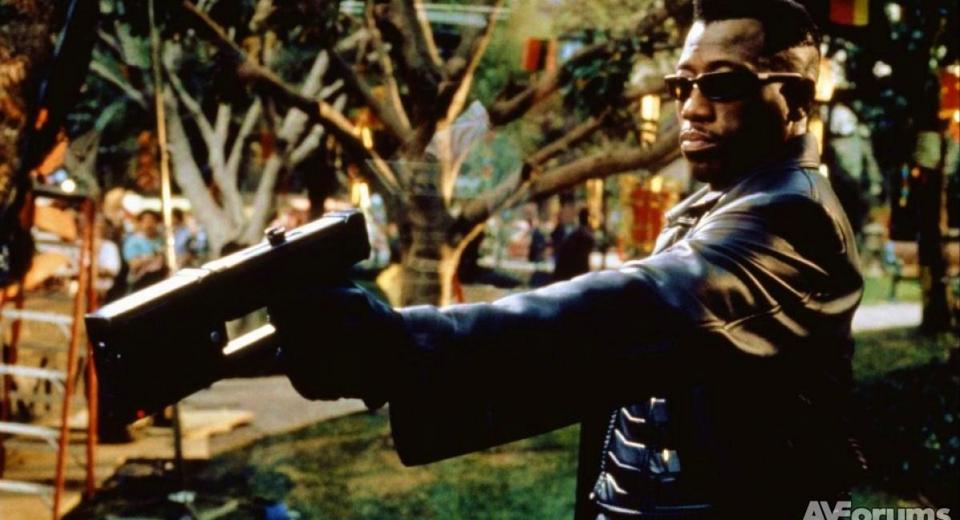 Rather frustratingly coming a month after the UK release of the second and third Blade movies, the first film hits the shores with what appears to be an identical video presentation to its US counterpart. The 1080p/AVC encoded video gets off to a bit of a rocky start during the title sequence, but, beyond that, looks very impressive indeed, with only a few moments across the runtime which do not shine, and these themselves only coming largely as a result of the source material rather than the encode.

You have to remember that Blade may not be a particularly old movie, but it was made on a fairly tight budget, with limited effects, and the end result can only be restored and cleaned up to a certain extent – this video presentation, as I noted on the US release, shows no telltale signs of excessive DNR application, instead boasting a presentation that has a nice filmic grain layer and hasn’t been mistreated in any discernible way.

If you want to quibble about problems, you’ll find they largely lie with the source – mid-range shots can vary depending on lighting, and some of the more stylised footage is simply not going to look any better than this because of the way it has already been processed in post-production. Still, there’s no doubt that this is better than Blade has ever looked before, boasting some close-ups that are simply stunning; showcasing skin textures, pores and hair detail at a level which you never would have expected for this movie.

The colour scheme is well-represented – again it’s been stylised to slant towards colder hues at various points in the features, but blood tones are still deep and rich, and blacks are strong, allowing for decent shadowing and impressive night sequences. It’s not a perfect video presentation, but there is a strong argument that it is still demo quality, and it is certainly the very best that Blade has ever looked. On the aural front we get exactly the same DTS-HD Master Audio 6.1 track that accompanied the US release and it is certainly an impressive one. The movie has a superb soundtrack and the stomping audio mix truly does it justice, matching up to the excellent video with its impressive presentation. Dialogue comes through clearly and coherently, largely dominating the fronts and centre channels whenever appropriate. Effects are myriad, normally driven by the incessant powerdrill spat of Blade’s machine-pistol, the thundering boom of his shotgun or the whipping slice of his sword, the spontaneously combusting vampires making a suitably flaming exit across the soundstage too. Dynamics are spot on, and there’s plenty of directionality on offer, as well as some truly immersive moments – with murmuring crowds all around; bustling streets; and traffic noises (including the growl of Blade’s ’68 Dodge Charger) all working well to built up a heady atmosphere. The instrumental side of the score works well too, infusing heartbeat-like beats into the quieter moments before the highlight of the mix – the music tracks themselves – kick in. From the opening techno tracks which provide for a stomping opening sequence, to the later battles, your system simply won’t have time to take a breath. Well, maybe one. All in all, it’s a fantastic mix that provides a hefty amount of demo material in another near-perfect presentation. On the extras front this release boasts exactly the same set of extras the US disc has.

As one of the first DVD releases, Blade excelled in the extras department, showing off the early potential of the format. Whilst we don’t get anything new here, at least almost everything has been ported over (we’re missing the isolated score and commentary by Composer Mark Isham, some pencil sketches and some trivia options), albeit only in SD.

La Magra takes a quarter of an hour to look at the story’s evolution, incorporating Deleted Scenes, the unfinished Alternate Ending and on-camera interviews with Goyer, Frankfurt and New Line Cinema President of Production, Michael De Luca. Whilst it’s interesting to hear about their ideas for a film starring L.L. Cool J, the development of the story and the final casting, the real highlight here is the alternate ending (as described in the main review), which completely changed not only the closing battle but also the aftermath. Probably the best of the Featurettes.

Designing Blade spends 22 minutes with production designer Kirk Petruccelli, who allows us insight into the development of the production designs, make-up and special effects; explaining how the specific set and costume designs were all in-line with the mood and tone of the piece as Goyer wanted, and how the meticulous attention to weapons detail set Blade apart from his counterparts.

Origins of Blade: A Look at Dark Comics is 12 minutes long and has contributions from Stan Lee, Goyer, and a number of other comic writers, who discuss the transition from the colourful superheroes of old to the darker comic book characters and tales of more recent times.

The Blood Tide spends 20 minutes looking at vampire mythology and real-life blood rituals, with contributions from a number of experts – from haematologists to priests. It’s a surprisingly rewarding little extra which boasts plenty of historical background detail into the real rituals that arguably formed vampire lore, and the more scientific aspects of the whole vampire mythology. No Blade = No Avengers. Got your attention now? Overshadowed by 1998’s The Matrix, this the success of this little underappreciated and underacknowledged 1998 superhero flick was what started the comic book renaissance in the first place, leading to projects like Spiderman and X-Men getting off the ground, and thus leading to the founding of Marvel Studios and the creation of the massive project that is the Marvel Cinematic Universe.

Looking back, Wesley Snipes’s Blade is still one of the best adaptations of a comic book character, and with this first outing we get a kick-ass action-fantasy-thriller which paints vampires the way they should be, and doesn’t hold back in the action-for-adults stakes because of PG-13 restrictions. Violent, bloody, and packed to the hilt with well-staged shootouts, martial arts face-offs and swift swordplay, Blade is 2 hours of hyper-stylised fun. Sure, it has its flaws, but it was still an against-the-odds astounding success; a milestone in cinema history. An admittedly imperfect movie, but perfect entertainment.

After my retrospective look at the Blade Trilogy we finally take a look at frustratingly delayed Region Free UK release, which comes complete with excellent, demo quality video and audio, and all of the most important extras ported over from the original feature-packed DVD. Fans would have likely already picked the US release up – its Region Free status means there’s no reason not to – but for those who waited, you should find the UK release identical, and probably a whole lot cheaper. Either way, this movie warrants a place in any action-film-lover’s collection. Recommended.