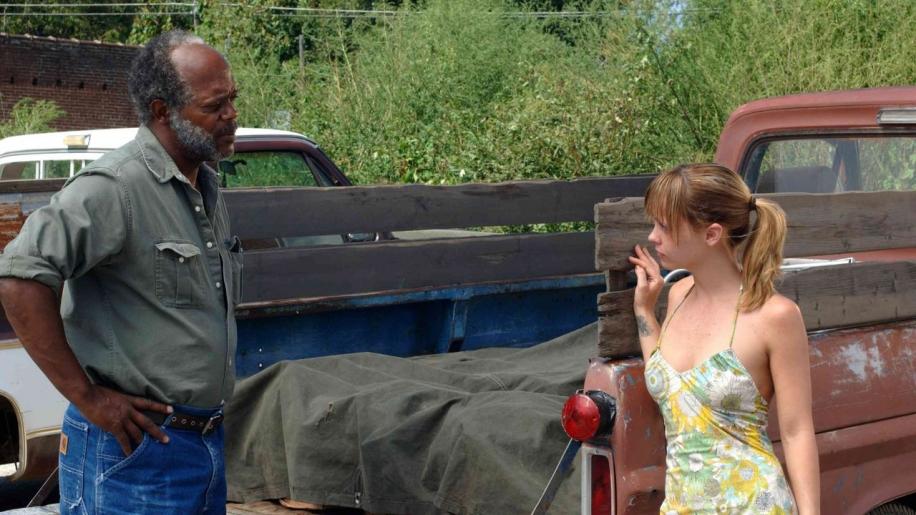 Samuel L. Jackson has, more often than not, been lumbered with limited clichéd roles, in which he takes the opportunity to own the part and make it memorable. He was pretty great in Pulp Fiction, but still, between everything from Snakes on a Plane (which was only made enjoyable through his knowing performance) to the XXX movies, recently Jackson has little opportunity to have his acting chops truly tested. Christina Ricci, on the other hand, has been going strength to strength, having graduated from her cheesy teeny movies to some more adult-natured material, like the dark Prozac Nation and Monster. Their latest, Black Snake Moan, discusses issues of love, loss, repression and nymphomania, even throwing in a little bit of redemption. So, is it any good?

Lazarus has just lost his wife. No, she didn't die, she just decided to leave him for another man. His life ruined, he takes to the bottle bigtime. On the other side of town, the trailer-trash J has just said goodbye to her boyfriend, who is leaving to go to war. She happens to be a nymphomaniac, so pretty-soon she's chasing all over town looking for action. After one night of particular debauchery, and far too many hallucinogenic drugs she finds herself beaten and dumped, half naked, on the side of the road. When Lazarus comes across her unconscious body, he takes her home to nurse back into health. On the road to recovery, both of them have to deal with their demons, Lazarus exorcising his anger over his wife's betrayal and Rae fighting through the repressed damage that fuels her desire to shag her way into oblivion. But will Lazarus' unusual tactics of chaining Rae up to his radiator really work? And will the whole town (including Rae's returning boyfriend) take well to his seemingly forced imprisonment of a young white girl?

Black Snake Moan kicks off as quite a gritty, dark voyage through self-destruction and nihilism, establishing the lead characters on their paths to hell and then colliding them together. Cue lots of shouting, screaming, resisting and general cursing. It is then that the drama starts to take a slightly different turn, becoming more predictable, less substantial and a tiny bit too... well, musical. As soon as the two leads start turning to singing the blues, with electric guitars, things get perhaps a little bit too symbolic and simplified, losing any kind of dark, serious and dramatic elements that the first act established. That's not so say that this is not a good movie, it is. Just not the kind of Award-winning material that it is touted as being.

Of course, the two leads are expectedly superb. Samuel L. Jackson is on top form - and actually tested a bit - as the disillusioned Lazarus, who fights to return to his religious roots, but kudos should be given to Christina Ricci who proves that she is capable of grabbing your attention not only by ripping her clothes off (which she spends most of the first act doing) but also by acting her ass off. Her scenes, in particular with her mother, are fantastic and her character portrayal is at once sympathetic, pitiful and realistic. The other noteworthy presence is, much as I'm pained to say it, Justin Timberlake. I'm still not convinced that he can play anything other than this kind of character, but in the role of Rae's boyfriend - who has his own issues - he is really quite good.

Black Snake Moan is a sometimes dark, sometimes shallow take on some fairly serious, often avoided social and personal issues. It is flawed, but enjoyably dramatic, without being utterly compelling. The performances are great, the filming stylish without compromising the depiction of the realistic horrors and the story of redemption even comes across as slightly rewarding. It will never be a classic, or even a cult classic, but that does not make it any less watchable, nor any less worthy of your time. Check it out.