Rumbles in the Jungle 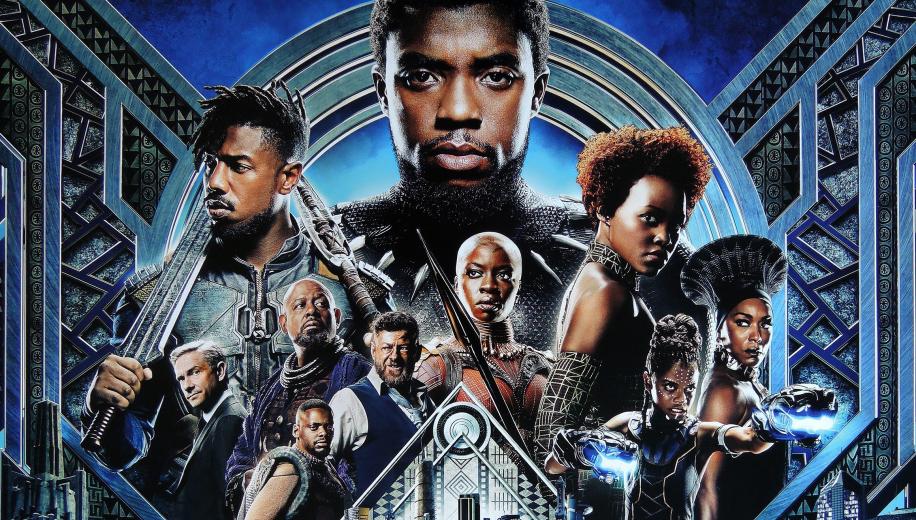 Sure, Blade may have done the whole black Marvel superhero thing decades back, and with far less political grandstanding, but there's no denying the cultural impact of Marvel's first (and, let's not forget, the world's first) blockbuster with a predominantly black cast. It would be nice to think that we live in a time where we can see past colour but whether we're talking Hollywood or the real world beyond, we're a fair ways from that, and Black Panther can do nothing but good in that respect (with Captain Marvel hopefully helping cement the good done by Wonder Woman in another camp). Thankfully, beyond the political statement that this film can't help but embody, there's actually a very good origin movie beneath.
Following the events of Captain America: Civil War and the death of his father, T'Challa is set to be crowned the new King of Wakanda - a secret super-futuristic nation hidden in the heart of Africa - and handed the mantle of the new Black Panther, one of a long line of rulers instilled with superpowers from the magical herbs found in the land, and protected by bodyarmour and weaponry made from the unbreakable Vibranium ore mined from deep beneath the mountains. Being a King, however, carries with it a heavy burden, as warring tribes prove hard to bring together, tribal leaders prove hard to appease, and powerful enemies from the outside world threaten to break up the perfect ecosystem of Wakanda. Right from the mythical story-within-a-story scene-setting narration at the outset, Black Panther successfully injects you right into a whole new world, one which is unlike anything in the Marvel Cinematic Universe we've known so far. It's both disarming and exhilarating, reminiscent of a first viewing of Avatar, transporting you to a vibrant new land full of magical herbs and marvelous future-tech.

Whilst it occasionally veers towards a Coming to America-style pastiche of Hollywood's view of African culture, Black Panther - for the most part - does well to blend advanced technology with tribal rituals, bringing the characters to life with distinction, and giving Wakanda its own tangible identity despite being an utterly fictitious land. Ironically, Black Panther's plot trades in almost nothing original, with almost every narrative arc - large or small - predictable right down to the surprise reveal of every twist and the final blow of every fight. It's not just unoriginal in terms of the Marvel Cinematic Universe, as 18 films down the line and the MCU has happily recycled its own ideas more than once, but actually in terms of Hollywood movies in general, with the Rocky franchise alone having trodden almost every single beat here (further irony given director Ryan Coogler's already rehashed Rocky - to admittedly fabulous effect - in Creed). The crazy thing is, whilst it may offer nothing new on paper, the different twist on the setting, environment and characters that follow these well-trodden narrative footsteps leaves the whole endeavour feeling like one of the freshest features that the MCU - and perhaps even Hollywood - has delivered on such a large scale in quite some time, if ever.

Chadwick Boseman makes for a commanding titular character, but he's only as good as his adversaries, which spring forward through the larger the life villain played by Andy Serkis (who is having a lot of fun) and the superb presence of Creed's own Michael B. Jordan, who is one of the most well-rounded antagonists in the MCU (indeed a strong case could be made that he's not even a villain in the traditional sense). Further support comes in almost every corner, from Angela Bassett and Forrest Whittaker (who appears to have stepped from the set of Rogue One) as the heavyweights in the background, to Get Out's Daniel Kaluyya (whose character eventually proves the most one-dimensional), and relative newcomer Winston Duke. It's the women who stand out though, with Lupita Nyong'o a long way from 12 Years a Slave as T'Challa's activist ex-girlfriend, and Black Mirror's Letitia Wright proving one of the most fun additions as his tech-geek younger sister (the film's answer to Bond's Q), whilst The Walking Dead's Danai Gurira is so damn good as the head of the King's (all-female) Guard that you could happily watch an entire movie about her and her warrior sisters. Not unsurprisingly, it's the token white man who kind of stands out, with Martin Freeman and his poorly affected American accent leaving him the least likely top CIA Agent in town, and making you yearn for Agent Coulson and SHIELD.

Black Panther stages some impressively innovate action setpieces which revel in the marvels of Wakanda's advanced weaponry, once again putting yet another twist on drone control, adding layers to the 'powers' of the lead character through his kinetically-charged suit, and keeping things fresh with a perfect fusion of tribal warrior tropes and advanced civilisation future-tech. All the while Coogler keeps his direction energised and the Kendrick Lamar-curated and Ludwig "Creed" Goransson-scored soundtrack keeps the bass pumping. Again, it perhaps falls down slightly in leaving none of the outcomes of these conflicts in any doubt at any stage - the rise-and-fall-and-rise-again formula couldn't get any more tried-and-tested - but there's enough going on here in terms of rich cultural shading to make it easy to bloody well enjoy it at face value: namely, as an ostensibly fresh injection of much-needed life into the superhero (and blockbuster) universe. You may think that you've seen it all before but it's hard to deny the fact that you've also seen nothing like this before.