"All that challenge sh*t is over with. I'm the king now." 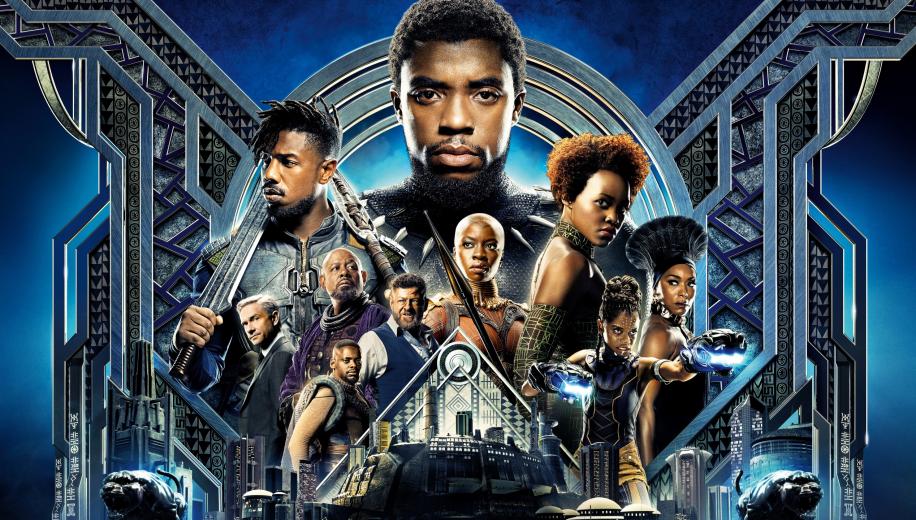 Right from the mythical story-within-a-story scene-setting narration at the outset, Black Panther successfully injects you right into a whole new world, one which is unlike anything in the Marvel Cinematic Universe we've known so far. It's both disarming and exhilarating, reminiscent of a first viewing of Avatar, transporting you to a vibrant new land full of magical herbs and marvelous future-tech.

Sure, Blade may have done the whole black Marvel superhero thing decades back, and with far less political grandstanding, but there's no denying the cultural impact of Marvel's first (and, let's not forget, the world's first) blockbuster with a predominantly black cast.

It would be nice to think that we live in a time where we can see past colour but whether we're talking Hollywood or the real world beyond, we're a fair ways from that, and Black Panther can do nothing but good in that respect (with Captain Marvel hopefully helping cement the good done by Wonder Woman in another camp).

Thankfully, beyond the political statement that this film can't help but embody, there's actually a very good origin movie beneath, one which fits in very nicely in the run-up to the game-changing Infinity War.


You may think that you've seen it all before but it's hard to deny the fact that you've also seen nothing like this before.

Ironically, despite the originality of its stunning Wakandan culture and setting, Black Panther's plot trades in almost nothing original, with almost every narrative arc - large or small - predictable right down to the surprise reveal of every twist and the final blow of every fight, trading in themes Creed Director Ryan Coogler would have been familiar with from the Rocky franchise. Hell, it doesn't even handle the borrowed story particularly well, seeing a fair fight challenge overruled just... well, just because the bad guys are bad and the good guys are good.

Nonetheless the style and setting - and fantastic score - are so wonderfully different that it makes the whole thing feel new. It's an, admittedly ostensibly, fresh injection of much-needed life into the superhero (and blockbuster) universe. You may think that you've seen it all before but it's hard to deny the fact that you've also seen nothing like this before.

Although we have only had one title (The Incredible Hulk 4K) from Phase 1 of the Marvel Cinematic Universe hit 4K in the US and UK (with the Iron Man 4K Trilogy available in Germany), and only a couple of 4K MCU titles from Disney themselves (Thor: Ragnarok 4K and Guardians of the Galaxy Vol.2 4K), both of which were impressive but still technically limited by a 2K Digital Intermediate, the Studio's recent release of The Last Jedi 4K upgraded things on the 2K semi-skimmed front to full-fat native 4K and even threw Dolby Vision in for good measure. Thankfully the Black Panther 4K release follows suit, delivering a native 4K video presentation complete with Dolby Vision too.


The Black Panther 4K Blu-ray remains the best way to enjoy the movie.

Although a full-fat title, affording a noticeable uptick in detail which is evident on clothing, backgrounds and even broad landscape shots, the real differences here are in the implementation of HDR and WCG enhancement. Black Panther already looks reference in 1080p Blu-ray, so the supporting tools of the 4K Ultra HD Blu-ray format are the key elements in raising the bar, refining the colour palette and taking the more striking tones to the next level.

From the vibranium glow to the purple luminescence of the mystical plants, there are some vibrant tones on offer here that really stand out - the dream sequence bathes the whole night sky in gorgeous purple - with blue glowing energy weapons discharging with some stunning pop. Black levels are rich and deep, and the Black Panther 4K Blu-ray video presentation remains comfortably the best way to enjoy the visuals of this movie.

Disney don't have a great track record when it comes to their home format soundtracks, whether on Blu-ray (Avengers: Age of Ultron) or, most recently, on Ultra HD Blu-ray (the Thor: Ragnarok 4K controversy continues to run), and even the soundtrack on their first Star Wars release (Last Jedi 4K) on Ultra HD Blu-ray was mixed low.

The unsurprising news is that Disney's inexplicable low mixing continues with Black Panther and, once again it'll leave fans either saying that it's a great soundtrack which you just have to listen to at reference levels, or that it's just another badly mastered track that's inexplicably leveled too low.

The reality, though, is that this is much closer to Last Jedi's release, in that it just appears to have been mixed low, rather than mixed badly (though there's some understandable debate as to whether or not the two are the same thing), with some - though certainly not all - quibbles about the track capable of being solved merely by turning it up to 11.


It's a good track but it should have been great, and those familiar with the cinema experience of Black Panther will feel that it is somewhat lacking.

Dialogue remains firmly prioritised across the frontal array, getting keen and clear dissemination throughout, but it's the score and effects that truly stand out. At higher volumes that other releases don't tend to require you to reach, the phenomenal score kicks in and starts to truly engage, thrumming along with a little LFE weight and proving something of an engulfing atmosphere.

Effects focus on the weighty energy weapon sounds, the low hum of the vibranium, the slash of claws and thunder of gunshots, with some nice discrete playback across the surrounds.

It's a good track, but it clearly should have been a great one, and those familiar with the cinema experience of Black Panther will ultimately feel that it is somewhat lacking, particularly in the bass department, simply not having the refined oomph that the film should have. This was a movie where the bass roared; repositioning the cells in your body right from the outset. That aspect is sorely missed here.

Again unsurprisingly, Disney's Black Panther 4K Blu-ray release delivers the 18th chapter in the Marvel Cinematic Universe with a complete lack of extras on the Ultra HD Blu-ray disc itself, leaving fans to flip to the accompanying Blu-ray to enjoy the thankfully reasonably substantial supplemental package.

Headlined by an Introduction from the Director and then a full Audio Commentary with him, which has to be the highlight in the selection, there's also a decent selection of Featurettes - The Crowning of a New King looking at the character's origins (in Civil War); The Hidden Kingdom Revealed delving into Wakanda; with Wakanda Revealed: Exploring the Technology looking at the high-tech vibranium weapons. The Warriors Within puts the spotlight on the female warriors; and Marvel Studios: The First 10 Years - Connecting the Universe looks at the build-up to this point.

There's also a great little extended piece with the crew, From Page to Screen: A Roundtable Discussion; a selection of Deleted and Extended Scenes, a Gag Reel and a preview of the upcoming Ant Man sequel, Ant Man and the Wasp. Marvel accomplished the impossible with Avengers: Infinity War, but plenty of the chapters along their way were important events, arguably none moreso than Black Panther, which not only took one of the least expected comic characters and turned him into a Big Screen hero, but also broke boundaries as the world's first blockbuster with a predominately black cast.


The studios are oblivious to the critical feedback of fans over the last few years.

The Black Panther 4K Blu-ray release delivers excellent video and a hefty salvo of extras, but unfortunately continues the run of Disney titles which are mysteriously mixed low, as if the production studios are utterly oblivious to the critical feedback of fans over the last few years. In this case that means a solid track but one which utterly lacks the bass impact the film's cinema presentation boasted. It's still a thoroughly unmissable experience, so if you missed it on the run-up to Infinity War, now's the time to rectify that.