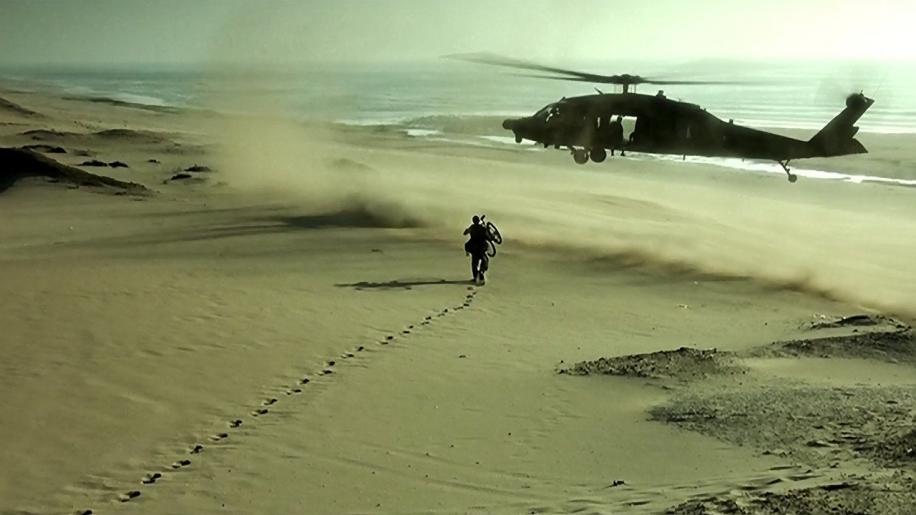 Presented in 2.35:1 Anamorphic widescreen the image is simply stunning to look at. There is a constant haze of yellows and greens used throughout the movie, giving everything a realistic African feel. What tiny flaws there are in the image, slight edge enhancement here and there with some visible print damage on the opening credits, doesn't stop this being reference quality video.

The print contains copious amounts of detail which can be enjoyed fully during the extreme close ups of faces with every line and pore visible. The use of highly de-saturated colours and slight grain only adds to the hand held camera work in conveying the realistic look and feel during those intense battle scenes. Black level is also good with plenty of shadow detail also present throughout.

This is a first class print and the transfer to DVD is simply stunning! The layer change is at 1h20m and is not overly noticeable nor does it interrupt any major scene. The menu screens are also in English and the subtitles can be removed by a simple press of the remote control. Well the main reason for reviewing this disc has to be the inclusion of a DTS soundtrack. There are only a handful of DVD discs from other regions which contain this Oscar winning soundtrack in the DTS format and these are the Scandinavian edition and the Korean R3 Superbit deluxe Edition (due for comparison review soon).

Right from the opening scene at 1m04s there is a building low frequency bass tone underpinning an Arabic singer giving a haunting overture to the text introduction. This continues to then open up on some disturbing pictures of starving children, and the bass disappears for a moment and we are left with just the wind blowing in the rear channels. At 2m07s as this wind is blowing we can hear the soft sound of rotor blades building at the rear of the soundstage. Each turn of the blades gives the impression of louder and louder air movement with the bass line reappearing again and building slowly, until finally we are straight in the middle of the Black Hawk Helicopter. The room pressurises fully at this point with the air movement of the rotor blades hitting you in the chest at the same time the bass line of the music track is quite scary and certainly deep. Your heart is racing by this point as the angry crowd of the market place fills the entire room and the opening sounds of gun fire into the civilians by the militia hits home with fierce power. The grin on my face at this point was not about what was happening on screen, but at the sheer impact this opening was having on me in terms of sound quality. Switching back to chapter one at this point and engaging the Dolby Digital (448kbps) sound mix was disappointing to be honest. The intense feeling built by the DTS (768kbps) track is simply lost on the Dolby version, with the bass line suffering the most. You just don't have that grin on your face with the Dolby Track.

And it doesn't stop at that point, as this Award winning soundtrack proves it was worthy of its Oscar. At 35m14s the troops run to their aircraft and again the underpinning of the rotor blades is breathtaking on this DTS track, and this also conveys the sheer weight of the Super Six Black Hawks as they lift off from the air field (36m39s). But it's not all about heavy bass lines and realistic Rotor sounds as demonstrated at 38m26s. As the helicopters move in formation they head out to the coast line for some low flying, creeping up on the city. The soundtrack goes silent, gone are the sounds of the rotors, instead we get a kind of Calm before the storm effect, wind noises softly surrounding the sound stage with that faint bass line creeping in again, and you know it is about to explode into action, but this part just builds the feelings up ready for your heart to race again.

Infact I could spend all day quoting times and giving examples of where this DTS track just sounds utterly breathtaking. And you get no rest throughout with even the quiet moments such as those discussed above providing some subtle tension. The sheer weight conveyed by the soundtrack for the rotors is simply stunning, and entirely realistic. I have flown a few times in a big helicopter and the feel by the DTS track is bang on realistic. I have seen this movie on a R2 UK disc with Dolby Digital and I always wondered after hearing it why this movie won the best soundtrack award. Now after experiencing this 768kbps DTS mix at reference volumes I get it. Simply breathtaking and highly recommended. The extras provided on this Japanese R2 edition are light but entertaining enough. We get a Making of Documentary (20 minutes), Trailers and TV Spots, filmographies and a photo gallery. Not as exhaustive as some editions, but I have a feeling the DTS track makes up for it. The movie is stunningly realistic, intense and harrowing. The picture is reference quality and the DTS soundtrack is downright frightening. Highly, highly recommended.