"Only the dead have seen the end of war" 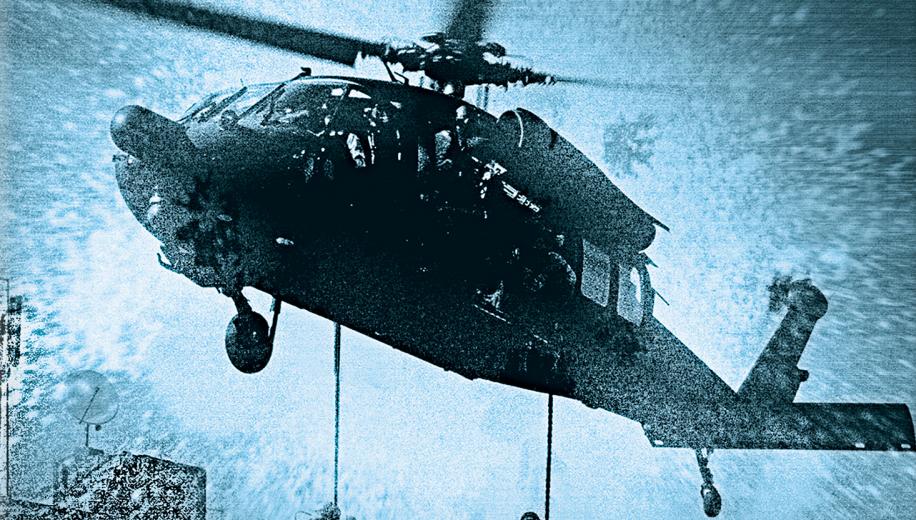 Despite ostensibly being based on journalist Mark Bowden's first-hand account, Scott repurposes the real events in Mogadishu and fits them for what is, for all intents and purposes, an epic survival horror actioner - at times maybe even descending into zombie horror - pitching the dogged and righteous American forces against the relentless Somali horde.

As politically unsavoury as the fictionalised elements might be, leaving very little grey area when it comes to the motivations of each party, what plays out is an absolutely stunning depiction of military survival horror, amidst the best of its kind, with Scott bringing the full measure of his skill to bear, rendering an impossibly tense, claustrophobic and punishing feat of endurance where absolutely nobody is safe and there's not a snowball's chance in hell of winning, merely the faintest glimmer of hope that a few might survive.

The story is the ultimate tribute to the Ranger Creed of never leaving a fallen comrade behind, after a mission to extract a vicious warlord in civil war-torn Somalia goes horrifically wrong. Repeated rescue attempts go awry, seeing the casualties escalate with the opposing forces closing in, seemingly innumerable and certainly insurmountable.

It's easy to forgive any jingoistic sentiments here, or the simple logic of sacrificing one to save the many - something which governments and military bodies appear to make decisions on in every other field of life - as there is a purity to the simple creed that dictates the extreme actions taken to save the few in this expansive military operation.

Scott levels his razor-sharp focus on battle tactics and courage under fire, bloodying his ensemble cast (taking in a tremendous salvo of now familiar names including Eric Bana, Sam Shepherd, Josh Harnett, Jason Isaacs, Ewan McGregor, Tom Sizemore, William Fichtner, Kim Coates, Orlando Bloom, and even Game of Thrones' Nikolaj Coster-Waldau and Tom Hardy, in his debut) as they fight for their lives behind enemy lines. Winning Oscars for editing and sound, and seeing Scott nominated as Director, this is one of his best features; a masterful exploration of a horrific cascading tragedy, and one of the finest modern war films.

Black Hawk Down comes to UK Ultra HD Blu-ray courtesy of Sony Pictures, matching up to their US release from just a couple of weeks ago, and delivering the same absolutely stunning native 4K presentation.

Detail is simply unparalleled, with the near-20 year old movie showing off some utterly spectacular sequences right from the get-go, as close-ups of sweaty, dirty visages, cast under Scott's trademark shadows - here impenetrably black but no less revealing in terms of shadow detail, thanks to exquisite HDR implementation - get put under the hot Somali sun. And boy is it a hot palette, baking the presentation, which renders warm golden tones set against the beautiful blue sky - at least when it's not streaking unforgiving winds of dirt across the screen, or getting lost in those cooler blues and steels that the director favours.

WCG and HDR are utilised fabulously - blacks are inky but don't smother the detail, instead merely highlighting the stunning cinematography, bringing every little bit of shadow detail to life with razor clarity. Some shots - particularly those in the air - have a little more grain than others, but the texture only reminds you that this is film we're dealing with, treated in the best possible way imaginable, yielding utterly demo results.

Black Hawk Down earns itself a stunning upgrade on the aural front too, delivering tremendous 3D High Definition immersive audio in the form of a Dolby Atmos track, which - as you might expect from the nature of the intense war movie - will give your sound system one hell of a workout.

Thrumming with intensity, but underpinned by a haunting score by Hans Zimmer, there's some wonderful directionality afforded to the almost incessant gunfire (at least once things kick off), with booming grenades exploding, RPGs whooshing through the air, rockets streaking down, miniguns strafing rooftops, sniper rifles echoing out, mounted .50 cals thundering, shells cascading, and your living room turning into a war zone.

LFE input is present throughout, bringing the shots to booming life, whilst the Atmos directionality allows bullets to whip around the soundstage. Dialogue remains clear and coherent throughout, but it's the effects and score that really define this spectacular demo track.

Released in a stunning 3-disc DVD set, back in the day, thankfully this new 4K bow brings with it the majority of the trappings that were sorely missed on the Blu-ray run, affording a 4K presentation of both the Theatrical and Extended Cuts of the movie, doubled-up via seamless branching.

The remainder of the extras reside on the accompanying Blu-rays, with the first of the two being an exact match to the original Blu-ray release of the film from over a decade ago, and sporting a trio of Audio Commentaries, as well as a comprehensive 6-part making-of Documentary.

The second Blu-ray disc is arguably the one which we should have had all along on the preceding format, sporting a slew of additional features which those who owned the original special edition DVD release will be familiar with.

There are 20 minutes of Deleted Scenes; a 6-angle scene breakdown with optional Commentary; a further 4-part Documentary on image and design, looking at how they imagined the feature visually, also with optional Commentary for two of the parts; an On The Set Featurette; a trio of Q&A sessions with the cast and crew; and a Music Video, a series of Trailers and a Gallery. Arguably, the highlight on this second disc comes in the form of the two features dedicated to the true story of this battle, the first being a 90 minute episode from the History Channel, and the second an hour-long PBS Documentary, both of which are utterly unmissable.

A masterful exploration of a horrific cascading tragedy, and one of the finest modern war films

Ridley Scott's epic Black Hawk Down comes to UK 4K Ultra HD Blu-ray courtesy of Sony, who deliver it with a stunning native 4K presentation, thunderous Atmos, and a plethora of extra features on the 3-disc set, leaving it a must-have release for fans of the film. Highly recommended.