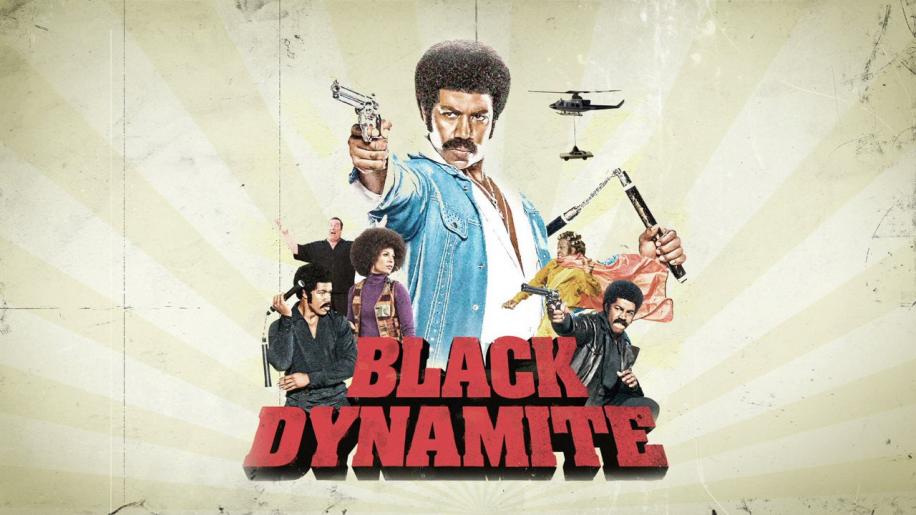 Before I say anything else, I think it only fair to confess a little something - I love spoofs. Not exactly a true skeleton in my closet you might think, but when I say I love spoofs I don't simply mean classics like the Naked Gun series. I will quite happily sit and chortle at the best and the worst this particular cinematic style has to offer, be it something wonderful and original like the rock satire of This Is Spinal Tap or even a beast as lowly derivative and barrel scraping as Scary Movie. Whether simplistic and childish or inventive and witty, be it spoof, parody or satire, any one of the three or all wrapped into one, it is a style of film that I never seem to tire of and can always find something to laugh at within. As such, the chance to review a parody of classic 70's Blaxploitation flicks was always likely to be right up my street.

Set in a time when men were men, women were usually naked and collars needed their own post code, Black Dynamite is the down and dirty tale of one man trying to clean the streets (and I don't mean with a mop and bucket). Directed by Scott Sanders, whose only previous credit at the helm of a motion picture was the perfunctory Alec Baldwin crime drama The Last Bandit (1998), my expectations were suitably low. We all know that not every send-up making its way to the big screen will be blessed with a heavyweight name like Mel Brooks or Christopher Guest behind it, but this lack of track record could be considered ominous. Couple this with the fact that writing credits are shared by Sanders alongside two first timers at scripting, both actors in the film, Michael Jai White (the titular Black Dynamite) and Byron Minns (Bullhorn), and you'd be forgiven for perhaps thinking this has turkey written all over it. Put simply, you'd be wrong.

As far as the story goes, it is as thin as the material on which it is based and plays this up for comedic effect excellently. The titular character of Black Dynamite is your typical badass, aiming to tackle drug dealers, shady politicians, corruption and sleep with as many foxy ladies as he can along the way. Dressed immaculately from head to foot in an array of well tailored and extremely gaudy matching outfits, be it the traditional three quarter length leather coated Shaft look or an outrageous rhinestone embossed flared suit, style is the very essence of his character. One of the problems facing Sanders must surely have been how to mock such a flamboyant dress sense when by its very nature it was larger than life. How do you make a parody of a style that seems ridiculous before you've even passed comment on it? In the straightforward choice between emphasising facets of the wardrobe to the point of caricature or playing it straight, Sander has managed to push the envelope just far enough to show us some of the more extreme examples of the fashion of the day, yet without ever moving to the point where it couldn't actually pass for a genuine Blaxploitation flick of the era. By taking this approach, those behind its production have managed to create a film that works not only as a comedy but also as a strange homage wrapped all in one.

This tip of the hat for those feeling a touch nostalgic for neon suits and afros that could double for zeppelins is all very well, but it would all be for nought if the comedy wasn't up to scratch. Evoking the era is one thing, the harder task would be to keep a story on the rails and find enough nuanced humour so as not to overload the audience with over-the-top ridiculousness in the opening act of the film. Countless spoofs and parodies have seemed in fine form for the duration of the first reel, yet wilt when challenged to find any more firepower in their comedic arsenal. Luckily, Black Dynamite is no one-trick pony. The fight scenes aren't entirely slapstick, with many encounters looking just as credible as those of the low budget films from which it takes inspiration. The beauty being that there is no need to expect hilarity at every moment and be let down by the fact that there are only so many ways to find humour in such scenes. Instead, half a dozen goons are dispatched by our hulking hero before there will be a moment that stands out and cuts the tension with its incongruity. One particularly funny example has a fight progressing to the point where an actor is actually hit and responds with profanity and absolute shock, cue a bad edit and his stunt double finishes the sequence for him.

The laughs aren't solely centred around the action set pieces though, as Sanders, White and Minns have managed to wring out a surprising amount of subtler moments that keep things ticking along nicely. Boom mics that fall into shot, backgrounds that wobble and archive footage that is inserted in, all cheekily point to fictional low budget roots (though the actual film was made with similarly tight means). It becomes so you are watching a film within a film and everyone is in on this preposterous production. The dialogue runs the same tightrope as the wardrobe and the fight scenes, being that it maintains a certain amount of credibility simply because the source material itself is so outlandish, yet it is often pushed for comedic effect. Lots of the vernacular of the period is thrown around like it was confetti, with “dig it”, “honky” and “freeze turkeys” all seeming perfectly acceptable by the end of the experience. This vocal interplay between characters in the moments of quiet is where the real comical gold is to be found. One ridiculous and particularly un-PC speech sees Dynamite recounting a typically melodramatic tale from his days in Vietnam, whilst referring innumerable times to a child as Chinese in an absurdly overt manner.

Black Dynamite was a joy to watch from start to finish. It doesn't require an extensive knowledge of the Blaxploitation genre, being that it contains enough universal cultural reference points from 70's cinema to make it accessible to all but the most sheltered audiences. It is chock full of period anachronisms, semi kung-fu fight scenes and has enough attitude to easily maintain its meagre 84 minute running time. The music is absolutely spot on and deserves to be scrutinised rather than flowing into the background as it contains some wonderful moments of irreverent lyrics. I was always likely to find myself enjoying this film, but I certainly didn't expect to be laughing out loud as much as I did. It alternates between highlighting clichés of the genre and moments of subtlety, with scenes that take the source material to the extreme. Chock full of profanity and with one use of the art of prosthetics that screams bad taste, I found it base in all the right places and witty enough to counterbalance these points. If you found such mainstream period parodies such as Anchorman: The Legend of Ron Burgundy to your liking and have more than a little soft spot for seventies kitsch or Blaxploitation then I can't recommend Black Dynamite highly enough. It is such a rich vein of comedy that I dare say Sanders, Minn and White have struck black gold.