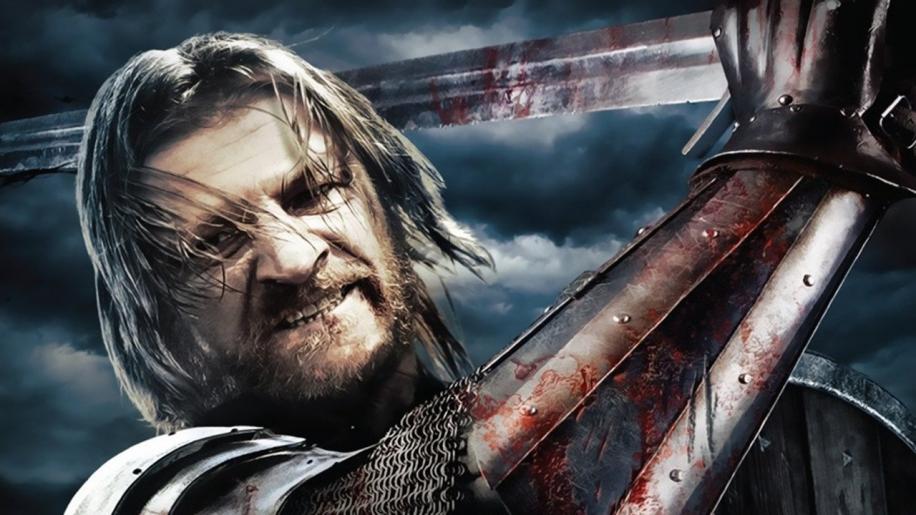 Black Death - now that’s a hell of a name! It may sound like an emotionally stunted overblown hair-metal band from a bygone era, the type who sang about Armageddon because their leather trousers were too tight, but in fact it’s the title of Christopher Smith’s (Triangle) latest film offering. Unsurprisingly it deals with the subject matter of the bubonic plague in medieval Europe, but with Smith’s recent directional shift with 2009’s Triangle, away from the simple scares of his earlier works Creep and Severance, such a base and horrific narrative crutch would surely see him return to the more grisly, straightforward, if sometimes inventive, bloodshed of his first forays into direction. Or so you might think.

The year is 1348 and the plague is spreading across Europe. In a monastery a young monk, Osmund, wrestles with his conscience for he has fallen in love with a woman but fears God’s wrath if he abandons his calling without good reason. He fears for the safety of this young woman, as the bodies mount up around the outer walls of the settlement, so in a bid to keep her free from the pestilence laying waste to all around, he sends her away. She tries to convince him that he must leave with her, but his oath weighs heavy on his shoulders, so he turns to God for guidance, hoping that there may be some sign given that will indicate if he is to stay or go. His lover pledges to wait for him at a set destination, and if he doesn’t show within a week she will be gone forever. You’d be forgiven for assuming this was more a historical melodrama than a Christopher Smith film, but bear with it in these opening scenes as they hold great significance further down the line.

These early moments are imperative for setting the scene. The drama unfolds whilst we bear witness to shots of cloistered monks behind their stone walls, keeping the suffering of the outside world at bay with seeming indifference. In the streets and fields bodies lay untouched, people pass with their faces covered and pyres of the diseased smoke away in the distance. This was not a film bestowed with a mammoth budget, but the art direction and design perfectly capture the mood of the era, as though the makers have attempted to recreate the various artworks associated with the catastrophe such as Bruegel’s “The Triumph of Death”. Imagery is layered adeptly and no corner of the outside world is free from despair and suffering. You could argue that perhaps it is a little heavy handed, but the message is clear – death is at hand and this is why the people turn to God.

The early pondering soon has a swathe cut through it by the entrance of Ulric (Sean Bean), looking every inch the embattled warrior. No character is given a complex back-story, and all that is told of Ulric is that he is the envoy of the Bishop, and made his way to the monastery in order to attain a guide to the outlying areas. In the first of many slights against the role of pious religiosity, the Father of the Order does not want to heed to this demand, preferring his gathering to stay within their safe confines. Ulric explains that they are headed to a village where word has it the inhabitants have not been touched by the plague and may be without God, though later we find this statement may have been economical with the truth as the word necromancy raises its head. Seeing this as a sign, young Osmund volunteers to take the men in that direction, though young, the fact that he grew up in the area and knows it well is enough for Ulric to accept his aid and enlist him into his band.

The assembled group is something of a Dirty Dozen, which arguably was unnecessary. Amongst their number is a torturer, a bloodthirsty brute, a mercenary, an honourable ex-soldier, a man with no tongue (apparently cut out by the French) and a last man that has no discernible qualities, as such he has gonner written all over him. These various archetypes are all carrying with them a vague story of why they have come to be in the service of Ulric, whether spoken or not, but first time writer Dario Polini lacks the deftness to integrate all of these disparate figures together seamlessly. Each individual does give us a different perspective of the brutalities of the time, but unfortunately they don’t knit together well enough to altogether avoid A Team like kitschness. Luckily once swords are drawn the attempts to hammer home the oddness of this group are left wisely behind and Smith can show off his flair for bloodletting.

Brutal can almost seem an insufficient adjective for the violence, as all manner of ways to cause harm are utilised, from the standard swords, shields, axes and spiked clubs used to bludgeon and dismember foes, to the more base tactics of fists, elbows and positively vampiric neck biting. The final element of the film’s barbarism revolves around more elaborate unsavoury practices such as torture, crucifixion and horse drawn limb wrenching. The Nordic names, the talk of shadowy beings heralded by a horn and bladed action sequences may have viewers assuming they are in for a good old fashioned genre piece like John McTiernan’s The 13th Warrior, but proceedings take an altogether more sinister turn as our bloodied troupe finally reach their destination after a trek that involves numerous gorgeous shots of long stretching vistas and ancient rock faces – squint at Bean and you would be forgiven for thinking this was Lord of the Rings. I have no wish to spoil the surprise, but suffice to say that all is not as it seems and an out-and-out butchery of the enemies of God is soon replaced by a more unsettling The Wicker Man-style level of malevolence. The men setting foot in this village of the dark arts are perplexed and Smith makes sure the audience is similarly unsure of what is about to befall them.

It is great credit to the director that he doesn’t tip his hand until the final act and the fact that what at first appears to be little more than swords and shields pulp material proves to have far greater intelligence behind its narrative is commendable and a most welcome surprise. The religious rhetoric and simplistic plot put the viewer in a safe zone where they are not expected to analyse what is happening too deeply beyond a few grey areas of morality, which seems to be exactly what Smith was depending upon. The clichéd good versus evil battle becomes far more layered, moving into Witchfnder General territory and offers no easy gratification for those keen on simplistic resolutions. Savage, unrelenting and with an unexpectedly cerebral twist, Black Death may still be saddled with the genre badge of knights and sorcery, but in reality it is much more complex and a far better film than its straightforward synopsis may suggest it could ever be.